The back story
The greatest fight-back in KHL history saw SKA recover from 0-3 in the Western Conference final to stun CSKA and win it in Game 7 in Moscow. Now head coach Vyacheslav Bykov is one step away from winning his second Gagarin Cup, and becoming the first man to coach two teams to the big prize.

It’s also a tale with echoes of 2008 in Quebec City, where Bykov’s star forward Ilya Kovalchuk faced intense criticism early in the World Championship, only to deliver in style in the closing stages of the tournament and end Russia’s 15-year- wait for gold. In Petersburg, hockey fans have had an even longer wait for glory, and many were frustrated by Kovi’s contribution in the early stages of the play-offs. But their man has been among the points in the last five games – can he repeat that zero-to-hero narrative in his club’s uniform? 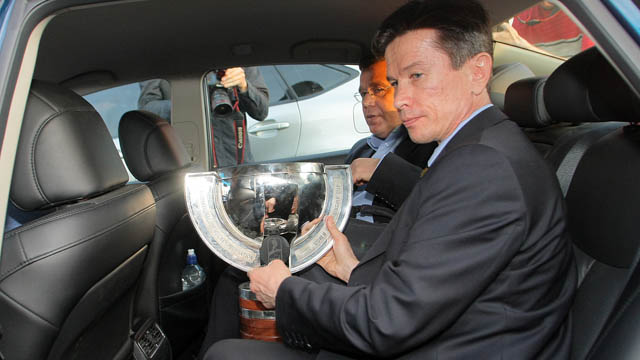 The road to the final
SKA brushed aside Torpedo in five games and then got some long-awaited revenge over Dynamo Moscow. The capital club had twice dumped its northern rival out of the play-offs on the way to Gagarin Cup glory in 2012 and 2013, but SKA came to Moscow with the series tied at 1-1 and played two sublime yet contrasting games. The first was all about control, blunting Dynamo and quelling the home crowd with a 2-0 win. The second was a blistering display of the team’s offensive prowess with a 6-1 blow-out. Dynamo took Game 5 to overtime, but there was nothing left in the tank and SKA advanced on a 3-2 verdict.

That set up a series that will live long in the memories of everyone who watched it. CSKA vs SKA, the two army clubs, the top two in the west, going head-to-head. We expected it to be close, but nobody expected this. CSKA powered into the lead – 3-0 in Game 1, an overtime squeaker in Game 2 and then a 3-1 victory in Petersburg to stand one step away from the final series. Then it switched. Ilya Kovalchuk started scoring and Evgeny Dadonov came to fore, bossing the power play to lead a 4-1 win before plundering 2+2 as SKA exploded with a 6-2 win in Moscow. From game over to game on, and Patrick Thoresen’s winner in a nerve-jangling overtime in Petersburg set up an do-or-die clash. Fittingly Dadonov and Thoresen were both on the scoresheet as SKA won 3-2 at CSKA to complete the greatest ever comeback in Russian club hockey.

How SKA can win
Popular wisdom dictates that Ak Bars has the edge on rigid on-ice organization, and SKA’s best hope is to rely on moments of individual genius from the likes of Kovalchuk and Dadonov to unpick the defense and score on the impressive Anders Nilsson. There’s some truth in that – it’s hard to imagine the Kazan team letting rip on an opponent the way SKA did against both CSKA and Dynamo during those series.

But don’t forget that this is a team than can play disciplined hockey as well. The 2-0 win at Dynamo in the Conference semi and the 2-1 overtime triumph over CSKA in game six showed all the hallmarks of a team that can find its way through a tight game as well as blow teams away when the ice opens up.

Moreover, like every title-winning team, they have a line capable of conjuring goals almost at will. Dadonov, along with Artemy Panarin and Vadim Shipachyov, has formed a second line of impressive power, sharing 51 points in the play-offs so far. Shipachyov is the leading assistant in post season (14) and Dadonov is the top goal-scorer (12); either could finish as the top point-scorer overall by the end of the final. Then there’s Thoresen, a Gagarin Cup winner under Bykov before, and Kovi, a talent well-suited to the big occasion. 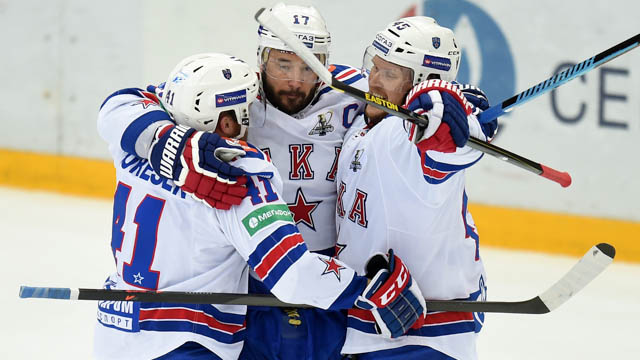 What they’re saying
“We’ll be making some changes from the team that played the deciding game against CSKA, but you’ll only find out on the day of the match. All the players we have are fit and ready to go” – Vyacheslav Bykov hints at a possible return for Viktor Tikhonov, who missed the last four games.

“We know what to expect from Ak Bars. It’s a disciplined team that likes to play its own hockey. They’ve got quick forwards who are ready to rush the net when they get the chance” – Alexei Ponikarovsky assesses the opposition.

“Losing the first three games [against CSKA] was hard, but on the other hand we could loosen up a bit because there was nothing more to lose. We went out for every game like it was a decisive battle” – Evgeny Dadonov explains how the team turned it around in the Conference final.