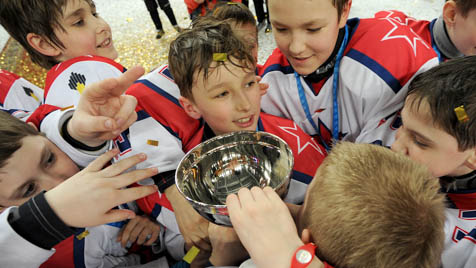 From the 25th to the 29th of April, 2015, Saint Petersburg and Omsk will jointly host the IX Gazprom Neft Cup, the international hockey tournament for KHL U-11 teams, and the competing youngsters will be under the protection of the prestigious insurance group, Sogaz.

Sogaz is a permanent partner of the Gazprom Neft Cup, and this year will be extending round-the-clock coverage worth 260,000 rubles (approx. $5,000) to each of the 550 young players who take part in the competition. For further peace of mind for the stars of tomorrow, the children will remain fully insured when they travel outside the tournament venues and official accommodation, and coverage includes the costs of emergency medical or dental care and related transport expenses of up to $15,000 per child.

Sogaz also underwrites the liability of the tournament organizers to the sum of 250,000,000 million rubles.

The company has even insured the main tournament trophy, the Gazprom Neft Cup, made by the very same master craftsmen who created the Gagarin Cup. Each year the ornate chalice is adorned with the name of the victorious team, who may then keep the coveted trophy until the following year’s tournament.

The IX Gazprom Neft Cup will bring together 25 teams from 6 countries. The tournament is split into two groups, East and West, and the main venues for these exiting battles will be the home arenas of the senior KHL teams, Avangard Omsk and SKA St. Petersburg. The winners of Groups East and West will contest the Superfinal at the Arena Omsk on the 29th of April, and professional KHL referees will be on duty at the game.

The Gazprom Neft Cup is Europe's biggest international hockey tournament for children aged 11 or younger, and has been an annual event since 2007.