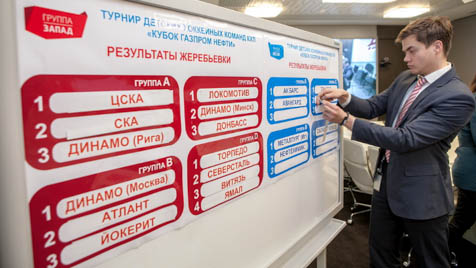 From the 25th to the 29th of April, 2015, Saint Petersburg and Omsk will jointly host the IX Gazprom Neft Cup. The event, Europe’s biggest international hockey tournament for children under 11, is held under the auspices of the KHL and this year will be contested by 25 teams from six countries.

The Organizing Committee gathered in Saint Petersburg on Tuesday, the 17th of March to address a wide range of important issues relating to the organization of the tournament, including the provision of accommodation and meals for the competing teams plus the marketing and communication campaigns in the two host cities. The highlight of the meeting, however, was the draw for the group stage of the tournament.

The participating clubs were seeded according to recent performances and their previous results in the Gazprom Neft Cup, and the two groups, East and West, were each divided into four sub-groups, A, B, C and D.

The results of the draw for the western stage, to be held in Saint Petersburg, were as follows:

The opening games in Group East and West will be on Saturday, the 25th of April, with CSKA and SKA facing off in the Saint Petersburg Ice Palace while Avangard and Ak Bars do battle in the Arena Omsk. The final games in the group stage are scheduled for Monday the 27th, and the tournament Super Final, between the winners of Group East and Group West, will be held at the Arena Omsk on Wednesday the 29th.

Organizing Committee Chairman Alexander Dybal, a member of the Gazprom Neft Board of Directors, had this to say after the draw: “We will have some spectacular contests even in the group stage. The two opening games - CSKA versus SKA in the West and Avangard versus Ak Bars in the East - are the kind of confrontations which would arouse great interest among the fans during the KHL play-offs and in the regular season. I think that the traditional and healthy rivalry between the senior teams at these clubs will be just as evident in the meetings between the youngsters. I must also mention that while the strongest teams were kept apart by the seeding process, in the Gazprom Neft Cup there will certainly be no easy games for anyone.”
#GPN
Share
Прямая ссылка на материал