Dynamo put its disappointing shoot-out defeat to Medvescak firmly behind it with an emphatic 7-2 success over a disjointed Slovan team in Moscow.

In the opening half of the game things could hardly have been easier for the Blue-and-Whites. An error from Martin Stajnoch in the seventh minute presented Konstantin Gorovikov a chance to rush and his feed was converted by Kaspars Daugavins as Jaroslav Janus was slow to get his hand down. Within two minutes Maxim Karpov made it 2-0 with another goal that Janus might have felt he could done more to prevent.

Slovan couldn’t even get going on the power play, failing to roll on offense and losing Stefan Ruzicka on a hooking call that handed the initiative back to the hosts and led to Denis Kokarev making it 3-0. Karpov’s second rounded off an impressive first period with Dynamo 4-0 ahead.

It got worse for the Slovaks early in the second as Alexei Tsvetkov found himself unmolested by any defenseman as he bore down on Janus and beat him high on the stick side, but gradually the visitor began to find some resistance. Janus pulled off a great save to deny Martins Karsums on the wraparound and a bit of belief spread to the offense where Tomas Netik pulled one back. Suddenly the play was getting closer to Alexander Yeryomenko’s goal, and when Dynamo found itself two men down Ivan Baranka thumped home a laser-like effort from the top of the circle to make it 5-2.

A Slovan recovery never seemed likely, though, and Dynamo killed off the game completely in the third. Daugavins got his second of the night, converting the rebound from his own shot before Karpov fed Martins Karsums to complete the scoring. 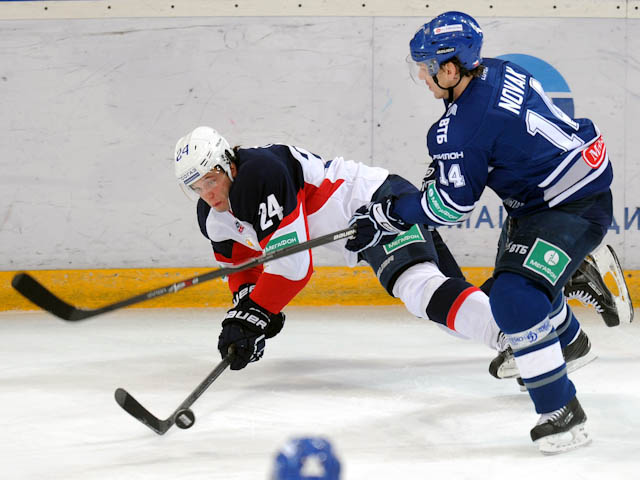 But Ak Bars couldn’t make the most of its reprieve and Gusev did indeed claim the decisive goal in the shoot-out.

Earlier Evgeny Medvedev put Ak Bars in front before the first intermission but Ugra turned it around early in the second session. Ilari Melart and Igor Bortnikov put the hosts up before Justin Azevedo hauled it back to 2-2. 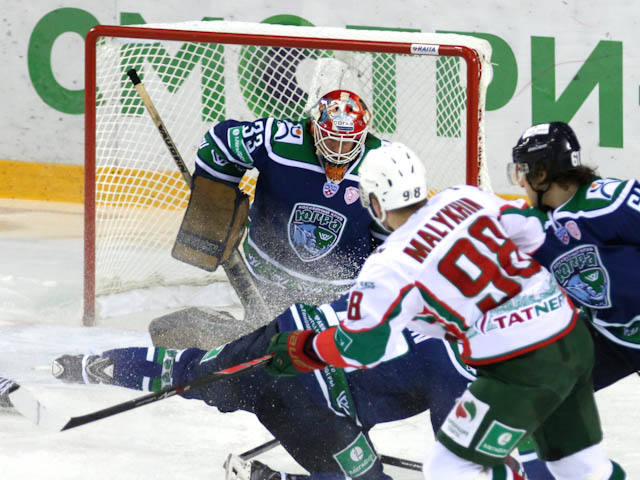 Eventful evening in Sochi
HC Sochi and Medvescak played out an incident-packed game that featured eight goals and 87 PIMs.

The home side won it 6-2, a result that was more or less inevitable after a blistering start put Sochi 4-0 up in the first period.

The damage was done in the 11th minute when Ilya Krikunkov and Cory Emmerton scored twice in 29 seconds; to make matters worse for Medvescak the visitor had a power play at the time and Sochi scored both goals while short-handed. Thus inspired Emmerton would go on to add a second as Sochi skated to a comfortable win.

But the third period had no shortage of incident, even if the outcome was long beyond doubt. Medvescak’s Nathan Perkovich was ejected for fighting with Roman Derlyuk and the home side’s Timofei Shishkanov joined him in the locker room for kneeing an opponent a few minutes later.

Alexei Mikhnov scored a hat-trick to give Avtomobilist a 4-1 win at Neftekhimik. The teams began by trading goals through Sami Lepisto and Pyotr Khokhryakov but Mikhnov scored two in the middle session and wrapped up the scoring with five to play.

Dinamo Minsk edged a vital 5-3 verdict at Vityaz in a battle of two teams fighting for a play-off spot. Matt Ellison scored twice for the Belarusians in a topsy-turvy game that Vityaz led twice through Maxim Afinogenov and Alexei Makeyev. 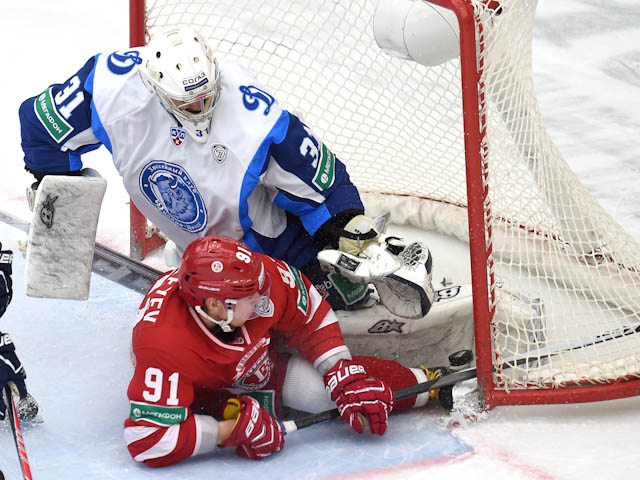