CSKA legend Boris Mikhailov, who celebrated his 70th birthday this week, was guest of honor as CSKA overpowered HC Sochi 6-2 to join SKA at the top of the KHL table.

Mikhailov saw his old club deliver another impressive performance that suggests the Army Men will be serious contenders for a first title in 25 years.

And he wasn’t the only CSKA old boy at Thursday’s game: HC Sochi brought Andrei Pervyshin and Oleg Saprykin back, while Vyacheslav Butsayev returned to familiar territory in the locker rooms on Leningradsky Prospekt.

But there were no favors for old friends: CSKA ruthlessly despatched the league’s newcomer. Two quick goals in the 10th minute set the tone: Stephane da Costa and Vladimir Zharkov put the home team in complete control.

The second period followed a similar pattern, with Igor Grigorenko and Sergei Andronov scoring in the space of a minute.

Sochi got on the board at last early in the third through Cory Emmerton but da Costa and Andronov both completed doubles to maintain CSKA’s dominance. Emmerton himself got a second late on, but it was a mere consolation effort for Sochi. 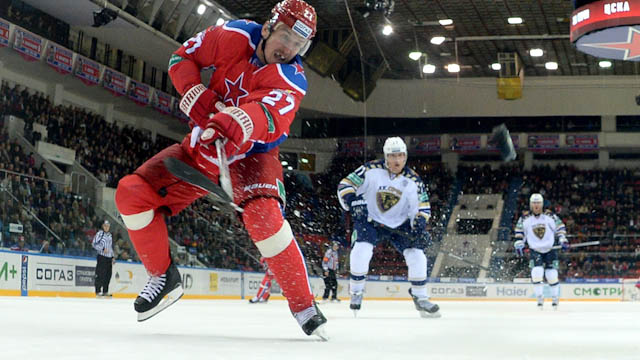 Burmistrov struck in the second minute, but Lada has matured fast since rejoining the league this season and, buoyed by wins over high-flying Metallurg Magnitogorsk and Avangard continued to put up a stubborn display.

Even after Janne Pesonen made it 2-0 in the 36th minute, beating the screened Ilya Ezhov from distance, Sergei Svetlov’s obdurate roster kept battling. Alexei Mastryukov pulled one back soon after that goal and deep in the third Stanislav Romanov tied it up at 2-2 before Burmistrov won it for Ak Bars in overtime. 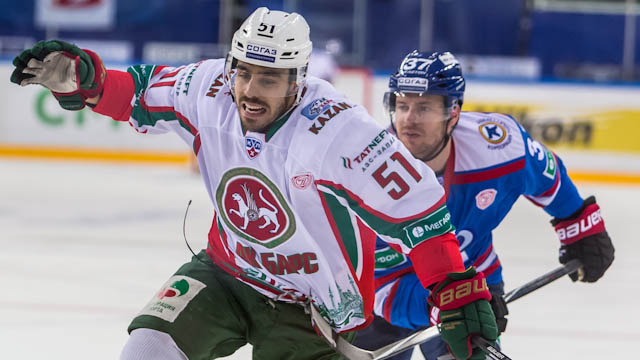 A 4-3 win over the defending champion was set up by a trio of goals either side of the first intermission. Enver Lisin scored on 18:50, cancelling out Denis Platonov’s opener. Then, after the break, Richard Gynge and Ilya Zubov scored two in five minutes to chase Magnitka’s starting goalie Vasily Koshechkin.

Maxim Yakutsenya put Magnitka back within a single goal, but a penalty shot from Vyacheslav Ushenin after Yaroslav Kosov’s foul put Admiral back in clear waters. Evgeny Grigorenko reduced the arrears with a penalty shot of his own late on but it wasn’t enough to save Metallurg.

Torpedo claimed a 3-1 win at home to Dynamo Moscow. First period goals from Vladimir Galuzin and Wojtek Wolski put the home team in control and Sergei Bernatsky completed the scoring with an empty-netter.

Konstantin Klimontov’s goal midway through the third gave Vityaz a 4-3 verdict at Severstal. The home team was left frustrated after racing to a 3-0 lead inside 12 minutes, only for Vityaz to steadily claw back the deficit and take the points.

Jakub Petruzalek’s shoot-out winner lifted Avtomobilist off the foot of the table following a 2-2 tie with Traktor. The Czech forward might have won it in regulation when he made it 2-0 in the 50th minute but Traktor rallied with goals from Jan Bulis and Andrei Popov. 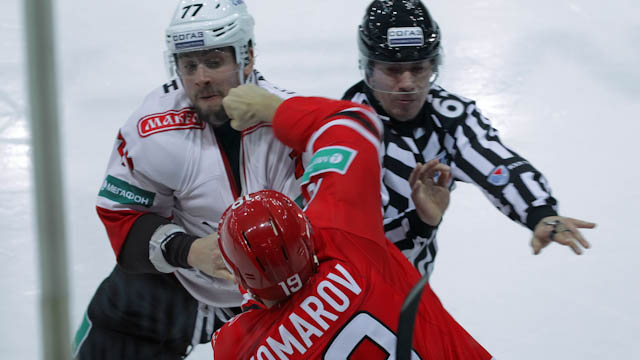