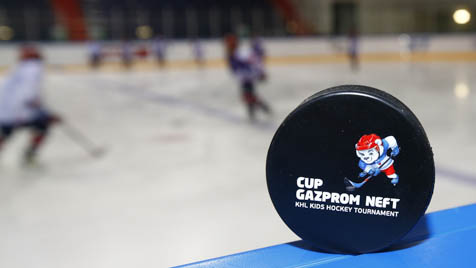 Saint Petersburg has been chosen as one of the host cities for the IX Gazprom Neft Cup. It will be the first time that Russia’s Northern Capital has staged games in the event - the biggest children’s hockey tournament in Europe.

The opening game in the competition will be a contest between SKA juniors and the current holders of the trophy, CSKA Moscow, at the Saint Petersburg Ice Palace. The same venue will also host the Group West final, while the city’s Jubileiny Arena will stage the other games in the group stage.

As with last year, the Gazprom Neft Cup will be contested by a total of 24 children's teams, and these will be divided into two groups, East and West, with the former based in the traditional host city of Omsk and the latter in Saint Petersburg. The winners of Group West will be flown on a special charter flight to Omsk, where they will battle for the trophy in the tournament Super Final against the Group East winners.

The event will take place in late April, 2015, and the exact dates will be set by the organizing committee in the near future.

"SKA has put in considerable effort to make Saint Petersburg the venue for the West stage of the tournament,” said the club’s Vice-President, Roman Rotenberg. “Not only have we made our finest arenas available, but we can also provide the organizing committee with valuable assistance in the planning and communication aspects of the event. We at the club will do all we can to ensure that the West stage of the Gazprom Neft Cup will have a permanent home in Saint Petersburg."

"It is with great pleasure that we accept SKA’s request to hold the West stage of the Gazprom Neft Cup in Saint Petersburg. The club offers superb conditions for the tournament and comprehensive assistance to the organizing committee. The city is also very convenient geographically for many of the competing teams of youngsters,” said Alexander Dybal, Gazprom Neft board member and head of the tournament organizing committee. “We are determined to give the tournament the same high level of organization as in previous years, and we intend to provide a special cultural program in Saint Petersburg for all twelve teams."

FACT FILE
The first Gazprom Neft Cup, for teams of young hockey players up to the age of 11, took place in 2007, since when the tournament has grown rapidly to become the biggest children's hockey tournament of its kind in all Europe. The Gazprom Neft Company provides the funding for all the core aspects of the event, including transport, food, accommodation, the opening and closing ceremonies, the staging of all the games, the media coverage of the tournament, prize money, souvenirs, seminars for coaches and even excursions for all the participants.

The Gazprom Neft Cup is conducted to standards unprecedented in junior and children’s competitions: the games are held at arenas built and certified by KHL and only the most highly qualified professional referees are on duty at the event, which is covered by the nation’s most respected sporting media. The main trophy was created by the same skilled artisans who crafted the Gagarin Cup, and the trophy resides with the winners until the following year’s tournament.

Since the Gazprom Neft Cup was granted the status of official KHL children’s tournament, the trophy has been won by Avangard (2010), Ak Bars (2011), Traktor (2012) and CSKA (2013, 2014). The opening ceremony will feature a multimedia show of the of the kind enjoyed by spectators at games between the leading clubs in the KHL, and both the opening game and the tournament Super Final will be broadcast live on KHL-TV and Russia’s Sport channel.

The official partners of the event include major Russian broadcast media, such as the Rossiya-24, Sport, and NTV-Plus TV channels, the KHL-TV channel, leading Internet sporting site Championat.com, and the famous newspaper, Sport-Express. The official English-language website of the tournament can be found here.
#GPN