Germany’s Result Sports agency, which has been investigating the level of activity of sports clubs on global social networks, has released a list of Europe’s top 25 clubs for social network activity during September of 2014. The league with the most teams represented in the standings is the Elitserien – the Swedish Elite League – with eight clubs. There are seven current or former KHL clubs in the top 25, while Germany has four, the Czech Republic - three, Finland – two, and finally, there is one club from the UK Championship. 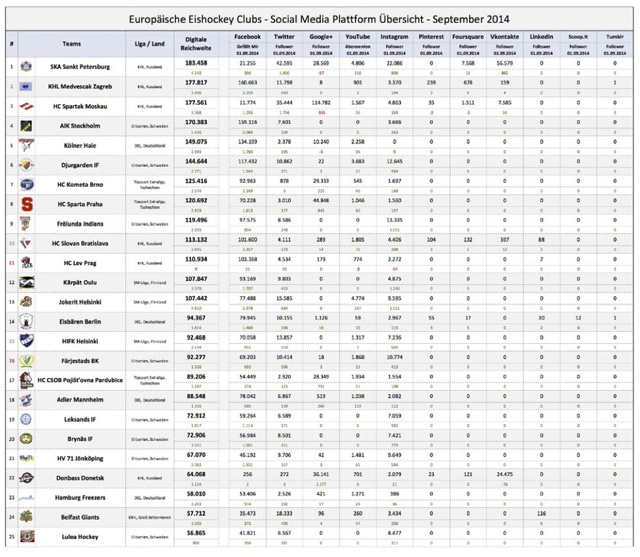 According to the agency's data, the team with the most subscribers in the official groups of clubs across the eleven major social networks is SKA Saint Petersburg, with an estimated 183,458 followers. SKA’s European dominance is quite evenly spread across most of the networks, and the men from Russia’s Northern Capital top the standings on VKontakte (56,579 subscribers). The second most followed team on the Continent is Medvescak Zagreb with 177,817 subscribers, including a record 160,663 Facebook users following the Bears of Croatia.

Spartak Moscow achieved third place in the standings, despite being unable to compete in the VII KHL Championship. The Red-and-Whites have amassed 177,561 subscribers and boast the best result among Google+ users: 114,782 followers.

In addition to the gold, silver and bronze places, the League has four more clubs among Europe’s social network elite: Slovan Bratislava is tenth (113,132), one place above Lev Prague (110,934), although the Czech Lions must also sit out the 2014-15 season; in 14th spot is debutant club Jokerit of Helsinki (107,442), while in 22nd place we find the third of the trio who cannot play in the current campaign - Donbass of Donetsk, with 64,068 followers.