Magnitka vs Red Bull – and dreams of a Summer Classic 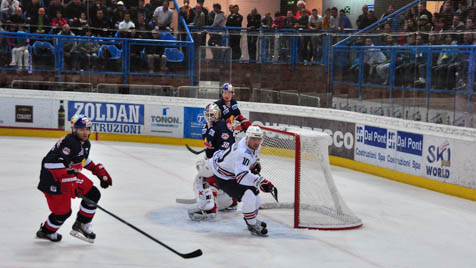 Gagarin Cup holder Metallurg Magnitogorsk ended its first preseason camp on a high note with a 5-2 victory against Red Bull Salzburg in the Italian mountain resort of Cortina d'Ampezzo.

Among those handed the unenviable task of thwarting Metallurg’s prolific offensive lines were two players with KHL experience: behind the goalie’s mask was the familiar face of Bernd Bruckler, formerly of Torpedo and Sibir, and readers may also remember Salzburg’s combative American defenseman, Brian Fahey, who spent the 2012-13 season with Vityaz. If the Austrians harbored any hopes of the Magnitka men being rusty after the long summer break, such thoughts had already vanished by the end of the first period, after Vladimir Malenkikh and then Danis Zaripov had got the better of Bruckler.

Scarcely had play resumed after the break when Dominique Heinrich unexpectedly halved the deficit, and suddenly we had a contest, an atmosphere, and even some fists flying in altercations around Vasily Koshechkin’s net.

A goal from Evgeny Timkin early in the third period relieved the tension and Magnitka coasted to a convincing win. Mozyakin ruthlessly capitalized on Fahey’s dismissal, and three minutes later, Timkin scored his second and Magnitka’s fifth before Brett Sterling’s strike made the score a little more respectable for Red Bull. It had been a highly entertaining encounter, with the frequent and inevitable summertime defensive errors adding to the drama.

That is probably all that one should say about the contest. There are, after all, a multitude of friendly games played all across Europe in the run-up to the new season, and no-one expects to witness anything sensational or extraordinary. But this was certainly no ordinary event.

As mentioned in the previous report, the game was woven into a tapestry of special events dedicated to the 90th anniversary of the local hockey club, SG Cortina, and possibly this goes part of the way to explaining the excitement surrounding the game. No fewer than five thousand fans thronged to the Olympic Ice Stadium; where they were treated to an pre-game show with live music, while during the break of play there were shootout contests between junior hockey players and impressive displays of figure skating. All in all, a valiant effort at providing something for everyone.

An unprecedented level of excitement also reigned in the VIP zone, which was packed with guests of honor. Among them were Dieter Kalt, President of the Austrian Hockey Federation; Andrea Gios and Tommaso Teofoli, respectively President and Head of Hockey Operations at the Italian Ice Sports Federation, plus numerous hockey functionaries and high-ranking local officials. 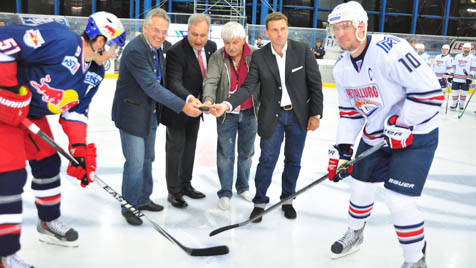 All seemed very eager to converse with the Magnitogorsk top brass, and they, in the midst of this maelstrom, seemed a little taken aback by all the attention.

“We were in Garmisch this time last year and we never aroused this level of interest,” Metallurg executive director Maxim Gritsay said of the welcome.

His thoughts were echoed by the club Vice President, Gennady Velichkin: “It’s such a pleasure when everything is so well organized. We realized straight away that this was a special occasion.”

Indeed, one has to give due praise to Ivan Zanatta and his brother-in-law, Antonio Menardi, the pair whose organizational skills ensured the success of the event. Zanatta will not rest on his laurels, however, and believes this is just the start of something much bigger in Cortina d'Ampezzo.

Ivan outlined his plans: “I want to create a tournament that will become a tradition, like a Summer Classic. A useful analogy is the Spengler Cup, which for many years in Europe has been a feature of the December hockey calendar. There are various winter classics, of course, and some in the fall, while we know we can’t have a springtime classic because of the playoffs, but summertime gives us a great opportunity. It’s a quiet time of year for hockey, so if we can put together a really exciting tournament and attract teams from Europe’s strongest league, the KHL, then it is guaranteed to appeal to everyone.”

“For us it would be ideal for this stage of preseason training,” said Gennady Velichkin. “In principle, we’d like the same camp as we had this year. Well, maybe two or three days longer. Train for a week and then play three games in five days, and you’d gather the right rhythm. Moreover, you wouldn’t lose valuable time trying to find sparring-partners, and negotiating about whom you play, where you play etc. It’s all here for you in one place. It’s convenient for all, so everyone is happy. And unlike a series of exhibition games here and there, a tournament adds competitive interest, and that’s not a bad thing, either.”

Of course, only time will tell whether the Zanatta–Menardi clan’s ambitious project will come to fruition, but judging by the professionalism behind the successful staging of the game between Metallurg and Red Bull, their plans for a Summer Classic in the mountains are more than mere castles in the air.