The resort of Cortina d'Ampezzo is one of many small and picturesque villages hidden away in the valleys of the Dolomites, but the name crops us time and again in the history of world culture. Ernest Hemingway thought it the ideal place to write his immortal tales; Oscar-winning Audrey Hepburn loved to visit; the hapless Inspector Clouseau came here in pursuit of the cunning jewel thief in the first Pink Panther movie, and James Bond arrived to save the world with his usual panache in For Your Eyes Only.

Cortina d'Ampezzo also made its mark in the annals of global sport. It was here, way back in 1956, that the Soviet Union made its first appearance in the Winter Olympics, and it turned out to be a spectacular debut. Gold medals for Evgeny Grishin, Yury Mikhailov and Boris Shilkov in the speed-skating, Lyubov Kozyreva’s heroic win in the cross-country, and victory for the men in the team relay helped propel the USSR to first place in the medals table.

To this, of course, we must add gold in the hockey - the first of eight Olympic triumphs by the national team (for trivia buffs, this includes the 1992 win by the Unified Team). Everyone lucky enough to be here was dazzled by Vsevolod Bobrov, with his exceptional offensive skills, and awestruck by the coolness and composure of goalie Nikolai Puchkov as he kept both the USA and Canada off the scoreboard. Bobby Bauer, the Boston Bruins' legend of the 1930s and subsequent Hall of Famer, said after the tournament that at least three of the Soviet players - CSKA defenseman Nikolai Sologubov, Krylya Sovietov center Alex Guryshev and Dynamo right wing Yury Krylov – were certainly good enough to play for NHL teams. High praise indeed, especially in an era when, you may recall, NHL teams numbered only six.

The same can be said of the rapturous applause given to the Soviet players from the spectators who had packed the Olympic Ice Stadium to the rafters. The fans in Cortina d'Ampezzo were not merely generous and appreciative, but knowledgeable and well able to evaluate the skills and qualities on show. This is because the gladiatorial game on ice was nothing new. On the contrary, the seeds of the game had been sown in these parts some decades earlier and the local team, Cortina, was founded in 1924.

That, of course, tells us that this year sees the 90th anniversary of the creation of one of Italy’s oldest hockey clubs, and a multitude of special events have been scheduled throughout the summer holidays to help celebrate Cortina’s jubilee. One of the high spots of the festivities takes place this evening, when that very same Olympic Ice Stadium plays host to a contest between Red Bull of Salzburg, from just across the Alps in Austria, and the Gagarin Cup holder, Metallurg Magnitogorsk. 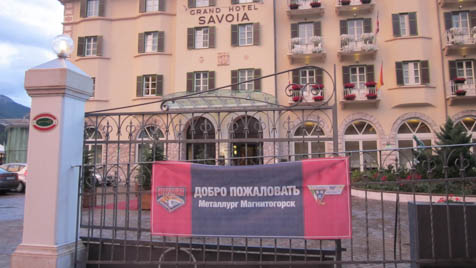 For over a week now, the Magnitogorsk men have been enjoying the hospitality of Cortina d'Ampezzo, and the hospitality here, incidentally, is almost limitless. If anyone doubts this, they should try a casual chat with Antonio Menardi, of the family who own the local Menardi Hotel. Introduce hockey into the conversation and you suddenly have a friend for life (and, quite possibly, a substantial discount on your room rates). Signor Menardi is married to the sister of Ivan Zanatta, the former SKA and Lev coach, thus ensuring that for future generations of the Menardi clan, hockey will be in the blood.

The men from Magnitka, however, chose the Grand Hotel Savoia as their base, and judging by the welcome poster adorning the gate of the hotel, this establishment is no less inviting. It is the first preseason camp for the finest team in the KHL, so tonight’s game will present Mike Keenan with a kind of progress report on his preparations for the new campaign and his team’s defense of its title, and it will be interesting when he shares his thoughts with us.

Below is a charming photograph of the fans of 1956 making their orderly way to the Olympic hockey tournament in 1956 against the idyllic backdrop of the Dolomites. 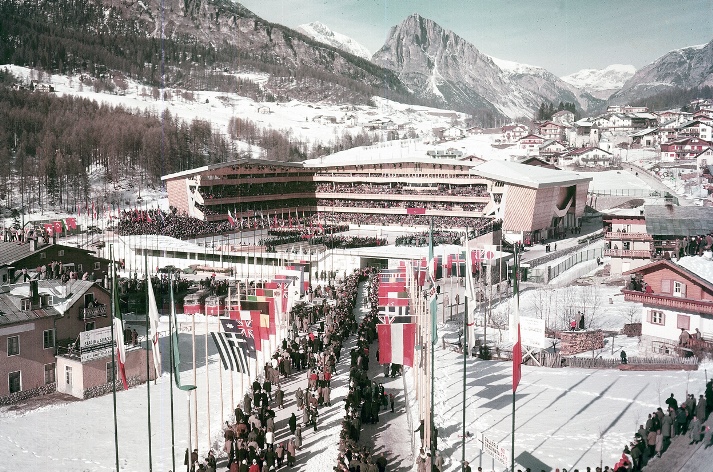 It's hard to predict the attendance for tonight’s encounter, but the tickets are attractively priced (€10 for children under 12, with adults paying between €15 and €25) and business, so far, seems brisk.