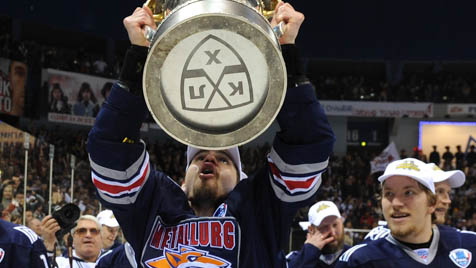 It has become a pleasant tradition after the end of each season for the players and coaches who won the Gagarin Cup to bring the trophy home, to the city where they grew up and took the very first steps in their hockey career. The first stop on the Cup’s summer travels was Novosibirsk, thanks to Viktor Antipin (pictured). It is true that the Magnitka defenseman was born in Ust-Kamenogorsk, Kazakhstan, but his parents have set up home in the Siberian city. Furthermore, Viktor has matched his on-ice success with a triumph in the academic field, having recently completed the defense of his thesis on Financial Auditing of Trading Organizations at the Economics Faculty of the Siberian Transport University, thus gaining his bachelor’s degree.

A few days before his graduation, Viktor visited the university with his father, Vladimir Antipin - the former Kazakhstan international and veteran of two Olympic Games, to show the Gagarin Cup to his fellow students, who gave him a stunning reception, packing the university’s auditorium to capacity. Many took advantage of the chance to chat with their now-famous classmate and have their pictures taken with the coveted silverware.

In addition to Novosibirsk, the trophy inevitably visited Magnitogorsk, where it attended a Final Bell ceremony. This marked the end of the academic year at School Number 28, whose former pupils include a very famous graduate of the Magnitogorsk hockey academy, Evgeny Malkin. Next on the itinerary is a trip to Chelyabinsk Region, where the Gagarin Cup will be a guest at the Ural Federal District Youth Forum on Friday, the 27th of June. Among the other illustrious names at the event will be Metallurg players Bogdan Potekhin, Alexei Bereglazov and Alexander Pechursky, to accompany the trophy which their team won in such spectacular fashion.