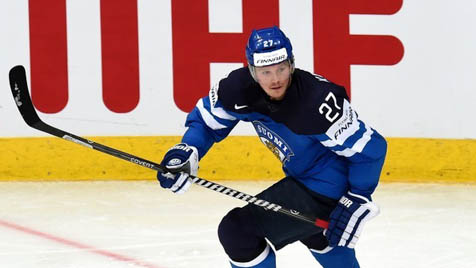 Finland would not even have made the play-off round if Latvia had won its final group stage game against Switzerland, but Kontiola insists he has always believed in Erkka Westerlund’s roster.

“I’ve felt like we could win this tournament since the day I got here,” he said after Finland edged Canada 3-2 in the quarters, and now he and his team-mates are just one game away from making that happen.

Not many shared that confidence when Finland arrived in Minsk with a squad that was radically different from the one that took Olympic bronze in Sochi back in February – and after two defeats in the opening group games against Latvia and Russia things looked bleak.

“We were a little frustrated after two losses, but we never felt much pressure in this tournament,” Kontiola added. “We weren’t one of the favorites at the start so we could go into our games without too much stress.”

However, the 4-2 defeat to Russia in the group stage draws a blank. “I don’t remember that game at all,” he insisted after helping to see off the Czechs on Saturday.

The 29-year-old, who also numbers Metallurg Magnitogorsk among his KHL clubs, admits that Finland goes into its summit clash with the Russians as an outsider, and cannot hope to compete with the scoring power generated by the likes of Ovechkin and Malkin, nor his KHL colleagues Sergei Plotnikov and Viktor Tikhonov.

Free-scoring offense isn’t the Finnish way; rigorous defense has been the key throughout the competition.

“We know we don't have that many skilled guys on offence,” Kontiola said. “We've got to work for the team first. We've got some great goaltending back there and we've got to help him out. I don't think we will ever score a lot of goals in a game so defence comes first.”

The goaltending comes from Pekka Rinne, getting a chance at the World Championship after injury disrupted his season with Nashville Predators.

He managed a sequence of almost 170 minutes without giving up a goal during the group phase, and pulled off some huge saves in Finland’s shoot-out win over Switzerland, but the 31-year-old is one of relatively few North American-based players donning a Suomi jersey in Belarus.

The 3-0 semi-final win over the Czechs came thanks to goals from Jori Lehtera of Sibir and Jarkko Immonen of Torpedo, with two assists for Kontiola along the way.

“It’s not how you start a tournament, it’s how you finish that counts,” said Lehtera. “This is the biggest game of my career – it’s bigger than the Olympics because this is a final. We need to win this game.”