Throughout the World Championship team Russia’s stately progress has been followed by questions about how the current competition compares with the Olympic disappointment of Sochi. And those questions, especially following group stage wins over Finland and the USA, the two nations that beat Russia beside the Black Sea, have drawn stone-wall responses.

It’s hardly surprising, perhaps, that head coach Oleg Znarok swatted away any questions about a tournament in which he was not involved, but the whole Russian roster has been equally dismissive of thoughts of a revenge mission as the championship in Minsk has advanced.

Instead, the focus has been squarely on the here and now, and on securing a perfect 10-out-of-10 run to lift the cup on Sunday evening against Finland. 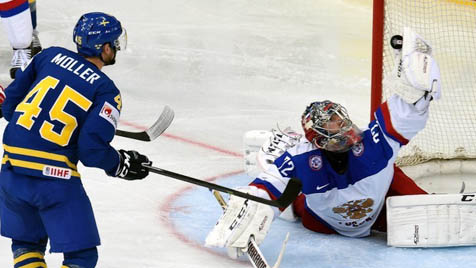 That’s way players like Viktor Tikhonov, the tournament’s leading scorer with 7+8=15 from nine games, is happier talking about the big saves of Sergei Bobrovsky and the need to get Russia’s power play right.

Bobrovsky has been in immense form throughout the competition, and his stunning glove save in the second period was a pivotal moment in Russia’s semi-final win over Sweden on Saturday.

“It was 100% the key moment,” said the SKA forward. “If it weren’t for this save, we’d probably still be playing out there. He is carrying us right now, and if it wasn’t for him, the games would’ve been much closer.”

As for that power play, which went unrewarded against the Swedes after treating France with similar generosity in the quarter final, Tikhonov is expecting to look again at the special teams before tonight’s final test.

That’s a view shared by Tikhonov’s SKA team-mate Vadim Shipachyov, who fretted that France had been let off the hook, particularly when Russia failed to convert a 5v3 advantage

Despite the presence of some big names – NHL stars like Alexander Ovechkin, Evgeny Malkin and Bobrovsky – Russia has also brought plenty of new faces to the competition and Znarok’s faith in players like Lokomotiv forward Sergei Plotnikov and Avangard prospect Sergei Kalinin has been well rewarded.

Plotnikov has harvested 12 points, despite struggling with a knee injury since the second game of the tournament to make himself the most effective rookie in the competition and a serious contender for a spot on the tournament’s all-star roster.

Sometimes the team’s inexperience and anxiety has put Russia into difficulties – as seen just 19 seconds into the Sweden game when confusion from the face-off gifted Oscar Moller a goal.

But another rookie from Yaroslavl, Yegor Yakovlev, underscored the determination that has his team just 60 minutes away from repeating the flawless golden sweep of 2012 and lifting a fourth World Championship crown in six seasons.

“When we started poorly it only made us angry,” the defenseman said. “All and all, I think we did well. All the opponents are hard in their own way; there are no walk-overs here.”

Russia is still waiting to learn whether head coach Oleg Znarok will be available to lead the team in the final. The former Dynamo Moscow boss faces a disciplinary hearing after he appeared to make a throat-slitting gesture towards one of the Swedish coaches at the end of yesterday’s game. In typically insouciant style Znarok later shrugged off the incident saying: “I had a sore throat. It’s pretty cold on the benches.” If Znarok is disqualified his assistant, Harijs Vitolins, will take the team into the big game.