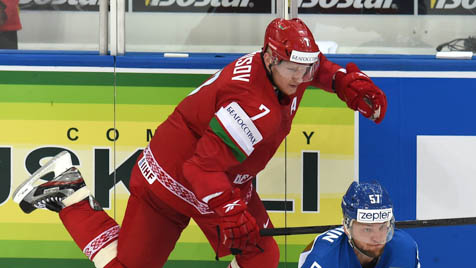 When Belarus takes on Sweden in Minsk tonight in its World Championship quarter-final, many will take a moment to remember one of the absent stars of Belarusian hockey.

Ruslan Salei, who will be inducted into the IIHF Hall of Fame this weekend, was one of the victims of the Yaroslavl air tragedy, but three years on his influence in team Belarus’ locker room can still be felt.

Experienced defenceman Vladimir Denisov (pictured, #7), of Torpedo Nizhny Novgorod, inherited Salei’s role as captain for the final group stage game against Russia, but admitted that it was tough to step into such a big role.

“It’s like [regular captain] Alexei Kalyuzhny says, we only have one captain on this team, and that’s Rus,” he said. “It’s kinda tough to be captain after him. It’s not easy to talk about.

“We’re all playing for him. I hope he can see how we are playing and I hope he’s smiling right now about our games. He helps a lot for us.”

Shirts and banners bearing Salei’s number, 24, are a common sight in the stands at Minsk Arena and as Belarus indulges in a spot of nostalgia about its famous 2002 Olympic QF upset against Sweden, Salei’s roll in that team – at the time he was the only Belarusian NHLer – is fondly recalled.

The class of 2014, meanwhile, has a chance to improve on that fourth-placed Olympic finish and claim the country’s first ever international medals.

And that would crown a big tournament for Denisov, who also played his 100th game for Belarus during the event.

His first World Championship also saw Belarus get to the last eight. In 2006 Glen Hanlon lead the country to its first ever knock-out game in a World Championship and a best-ever sixth-placed finish – while Denisov recalls a tight 2-1 win over Switzerland to make the quarter-final as perhaps his greatest moment to date in a Belarusian jersey. 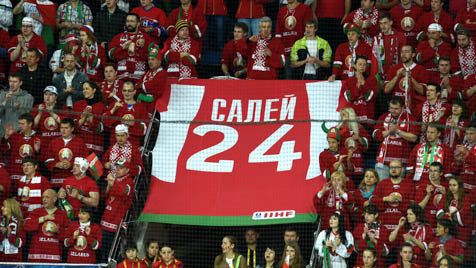 After a similarly slender victory over the Swiss in this year’s edition he recalled: “Maybe in Riga it was a bit different, a bit bigger emotion because it was for a place in the quarter-final and it was my first World Championship."

Hanlon, who first brought Denisov into the nation team, took time out to pay tribute to Denisov’s contribution – and paid the defenceman a huge compliment in comparing him to the great Salei.

“I remember I first saw Denisov when he was this young long-haired guy playing Keramin,” the coach said. “Even then he had real strength of character and for all these years Vladimir has been a player who represents the heart and soul of his country.

“In the history of the Belarus team there have been real leaders, guys like Ruslan Salei and Vladimir Tsyplakov, and Denisov is following in their footsteps.”