The magic of Minsk

When Belarus takes to the ice against Russia in the World Championship tonight, it’s set to be a raucous affair in front of some of the world’s most passionate hockey fans.

The 2014 tournament in Minsk is on course to set new attendance records for the competition, and KHL followers are well-represented among the hordes of fans descending on the Belarusian capital to be part of the big show.

It’s not just the host nation that has been enjoying sell-out crowds: games involving Russia and Latvia have also had the ‘house full’ signs posted outside the Minsk Arena. 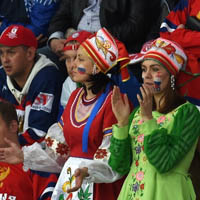 So when the local heroes go head-to-head with the ‘second team’ of most Belarusian fans, a red-hot atmosphere is to be expected – especially if Belarus is already assured of a rare passage to the last eight of the competition.

Of course, it’s well known that Dinamo Minsk has been packing them into the 15,000 capacity venue throughout its six seasons in the KHL, and now the Belarusian love of hockey has been shown to a global audience.

Players have been thrilled by the reception their efforts have enjoyed. Kevin Lalande, Belarus’ Canadian-born goaltender said that the feeling around Minsk was like nothing he’d experienced in North America, while Tim Stapleton, the USA forward previously with Dinamo Minsk was also full of praise for the supporters – even if they were cheering against him during his country’s opening game thrashing of the hosts. 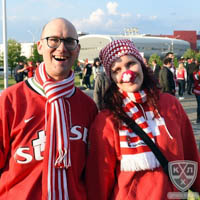 Even Russia’s star forward Yevgeny Malkin, a hero to Metallurg Magnitogorsk fans, arriving to the party on Monday, was quick to recall his own happy memories of Minsk: “It feels like I’m coming home,” he said after his first training session. “I have fond memories of Minsk after winning the World U18s here in 2004.”

Even more than the big crowds at both arenas during the competition, though, visitors to Minsk have been struck by the way the whole city has embraced the festivities.

Festive red and green lights festoon the city at night, while the large fanzone in the shadow of the old Dynamo Ice Palace, attractively set in a riverside park, has been doing a roaring trade. According to local media reports, the first six days of the tournament accounted for $1.6 million in sales of food and drink – with beer at $2 a pop, and a barbecued shashlyk costing $3, it’s clear that fans are well-fed during their stay here. 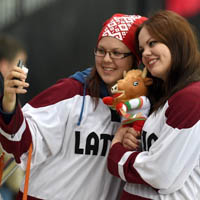 It was also here that a group of Finnish fans took a crash course in Belarusian folk dancing – a surreal combination of Suomi jerseys and traditional, lavishly embroidered linen that delighted Saturday morning punters limbering up for the Russia-Latvia game on the big screens around the park. And the party carries on long into the night – especially after a big win for Belarus, Russia or Latvia.

The IIHF has already hailed the competition as one of its most successful ever, and the KHL’s fans have played their own part in making it a tournament to remember. In the past, figures like Latvia’s head coach Ted Nolan have spoken warmly of how the league should take pride in the terrific support it enjoys; here in Minsk that message is being reinforced once again.