A new generation impresses in Minsk 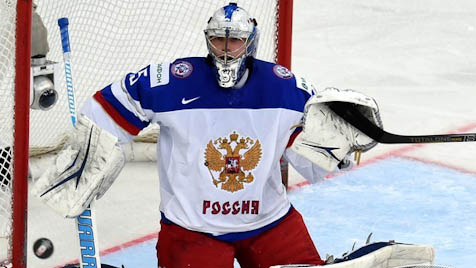 Salavat Yulaev’s 19-year-old goalie Andrei Vasilevsky (left) found himself catapulted into the spotlight after a stunning World Championship debut for Russia – spearheading a clutch of KHL youngsters making an impact on the international stage in Belarus.

Vasilevsky made 39 saves as Russia crushed the USA 6-1, winning plaudits from all sides and further swelling the ranks of emerging Russian talent on display at the tournament.

The shot-stopper’s assured display betrayed no evidence of nerves, although he admitted he’d been anxious before the game despite previous star performances at the Under-20 World Championship.

“Of course I was nervous,” he said. “This is a serious event, not some kind of youth tournament where you’re just out to shoot the puck around. But like my coaches say back in Ufa, if you’re not nervous before a game it’s time to quit the game. And my team-mates scored six goals, so that made it easier for me.”

USA coach Peter Laviolette was also impressed with his first look at Vasilevsky. “We had lots of looks and lots of opportunities at the net and the keeper made some big saves for his team,” he said after the game. “At times it didn't bounce our way but when we did get pucks on his net he made the saves for his team.”

But despite the excitement around Vasilevsky’s World Championship bow, Russia’s head coach Oleg Znarok plans to return to regular starter Sergei Bobrovsky for the next game against Kazakhstan on Wednesday.

Impressive youngsters have been at the heart of Russia’s success so far in Minsk, with Znarok’s new-look line-up riding high after impressive wins over Switzerland (5-0), Finland (4-2) and the Americans. 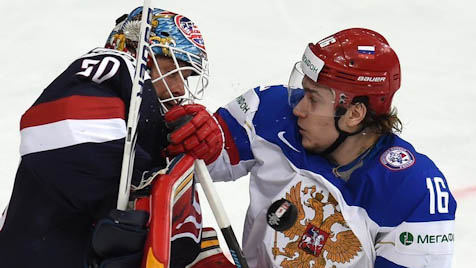 It took just 13 seconds of the event for Lokomotiv’s promising youngster Sergei Plotnikov (right) to set the tone for Russia’s next generation as the country looks for a strong start to the new Olympic cycle.

A neat back-hand drop-off on the blue line from Vadim Shipachyov put the 23-year-old into open ice on the right-hand channel; he gambled on an early shot across the face of Swiss goalie Leonardo Genoni and reaped rich rewards as he snaffled Russia’s fastest ever goal in international play to delight a big traveling contingent in Minsk.

Alongside Plotnikov, Avangard’s 23-year-old forward Sergei Kalinin has also made an impact. He was drafted into the squad after Andrei Loktionov got injured, and promptly deliver 1+1 on his international debut to help the team to a 4-2 win over Finland.

“It’s been an emotional day or two – I didn’t sleep too well the night before the game,” he admitted as reporters thronged around the Red Machine’s new sensation in the mixed zone. “But luckily I got into the game quickly, got on the scoresheet and gave the fans something to cheer.”

Of course, many of the big name stars – most notably Evgeny Malkin – are still engaged on NHL duties back across the Atlantic. But that opens up the roster for KHL talent to make its mark on the world stage, a chance which Plotnikov’s Lokomotiv team-mate Yegor Yakovlev is eager to embrace. 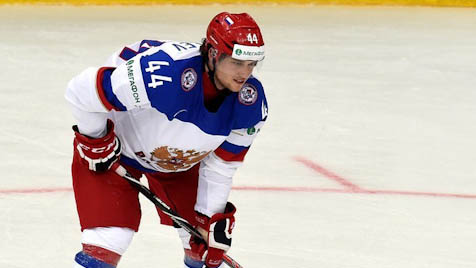 “It’s an interesting challenge for me to step up to a new level,” the 22-year-old said after playing two games alongside Anton Belov on the third line for Znarok’s team. Yakovlev (left), like Plotnikov, caught the eye during Loko’s play-off run and earned his first call-up to the senior national team after helping to silence the big guns of Dynamo Moscow and SKA.

And what of Plotnikov? Effective in the regular season, he exploded in the play-offs to post 4+10 in 18 games and earn his trip to Minsk. Once there, he found himself on the first line, alongside Shipachyov and the talismanic Alexander Ovechkin and enjoying plenty of ice time in the opening 5-0 win over Switzerland.

His illustrious partners also help him get opportunities, as he explained after that Switzerland game

“Every opposing player pays a lot of attention to Ovechkin, so I was left all alone and I had a shot,” he recalled. “It got me straight into the game so I didn't have time to feel nervous. We all focused on the game and were determined not to lose.”

Russia’s campaign continues on Wednesday against Kazakhstan, with Germany and Latvia also to come before the final group stage game against host nation Belarus. The only blot on the team’s progress so far was the disqualification of SKA’s forward Vadim Shipachyov for a blindside hit on Finland’s Pekka Jormakka. Shipachyov sat out the first of his three-game ban against the Americans on Tuesday.