The final few minutes of the sixth KHL season was an unbearably tense time for all at Metallurg. After Azevedo had struck a fourth goal past Vasily Koshechkin, the visitors had a little under two minutes left in which to perform a great escape, and with the quality of hockey produced by the men from Prague throughout every game of this series, no-one was ruling out the possibility. But the Magnitka boys kept their heads, the seconds slowly ticked away until, when there were only nine left on the clock, Mikhail Yunkov’s empty-netter triggered wild celebrations among the fans at the Arena-Metallurg, and soon the craziness of over seven-and-a-half thousand was pouring onto the ice.

Vasily Koshechkin suddenly found himself in the middle of a huge dancing whirlpool of Metallurg players, while the officials from the KHL, emerging to perform the season’s closing ceremony, looked on smiling, in no hurry to interrupt the euphoria. Finally, the League’s president, Alexander Medvedev, was able to officially congratulate the men of Magnitogorsk on their victory and announce the name of the playoffs’ MVP - the Metallurg captain, Sergei Mozyakin, who had smashed a number of scoring records on his way to Gagarin Cup glory. 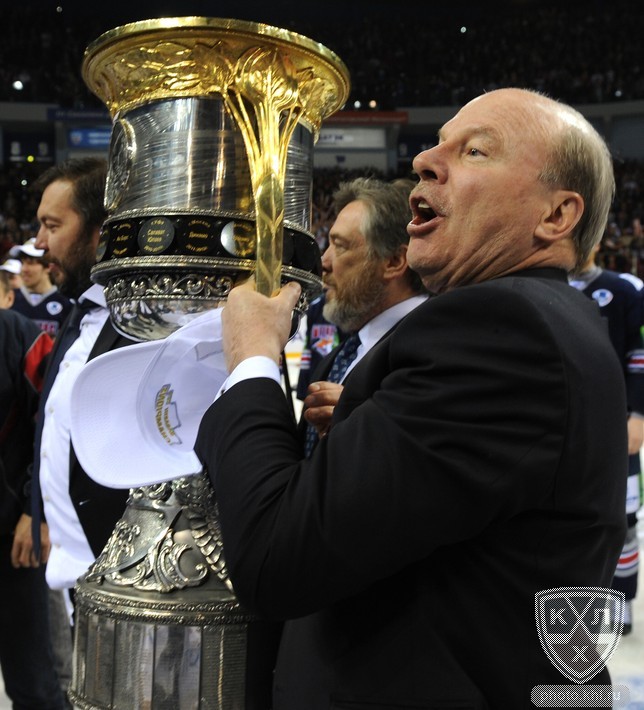 “It has been a crazy season,” Mozyakin said later, back in the locker room. “Everything just worked out. I would especially like to thank the club management, who brought Danis Zaripov here. We have a great understanding on the ice.”

“Do you plan to finish your career in Magnitogorsk?”
“I wouldn’t want to think that far ahead. I have a four-year contract, I hope to see it out, and I hope the management knows it can rely on me and isn’t planning to sell me.”

When the ovation for Mozyakin had finally subsided, club president Viktor Rashnikov took the microphone and thanked the fans, players, coaches, and said that today’s triumph was a victory for the entire city, the entire region, and indeed, for the whole of Russia. After these words, Alexander Medvedev and Viktor Rashnikov passed the KHL trophy into the formidable arms of Sergei Mozyakin and Danis Zaripov. The two target men were indescribably happy, as were their team-mates, who immediately seized the silverware and raised it aloft. Thus the trophy toured the ice for around ten minutes until it was goalie Vasily Koshechkin’s turn, and he darted straight to the bench to hand the cup first to Rashnikov, then to the Metallurg chairman, Gennady Velichkin, and then to an overjoyed Mike Keenan.

“For me, this success means as much as winning the Stanley Cup all those years ago…”

Iron Mike could not finish the sentence, since the same players’ hands which a little earlier had grabbed the Gagarin Cup now raised Keenan above their heads and repeatedly flung the Canadian high in the air. 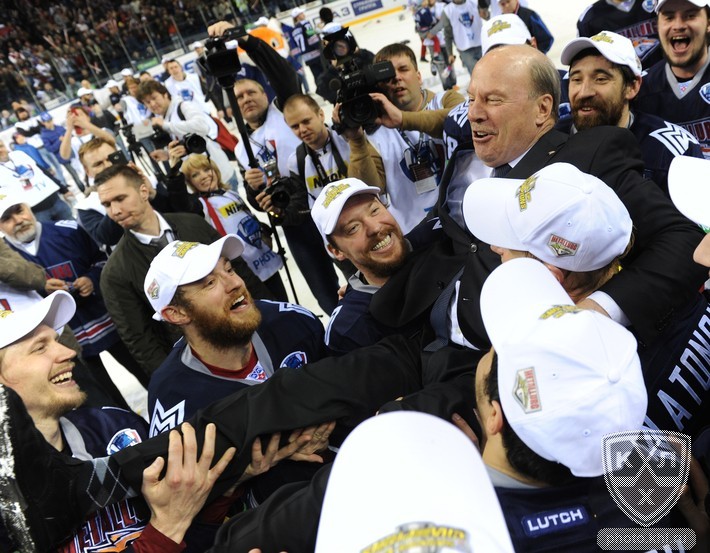 The celebrations, naturally, continued in the locker room, where the Magnitka heroes raucously poured champagne into the treasured trophy.

“Congratulations on your victory, guys!”, yelled Alexander Medvedev. “It was the greatest final in the League’s history.”

Then the trophy was passed to the people: the players, coaches, club staff, player’s wives and girlfriends were eager to sample the bubbly drink of victory, and all of them as one declared that champagne had never tasted so sweet.

“I would like to dedicate this victory to our wonderful fans and their parents,” said beaming Evgeny Timkin.

“We were up against a very impressive opponent, and we must give the Lev guys due credit,” said Vasily Koshechkin, who had doggedly dodged the press all season, but who was now just as patiently answering all the journalists’ questions. “And Game 6 in Prague is one I’d like to swiftly forget. For me, this all began when I was still at Severstal, where I was given a lot of ice time, so I gained invaluable experience and equally-priceless confidence. We have all grown together - not just me, but the whole team. Everyone tried their luck in offense today, and that’s why we had such a high-scoring game.”

“Who among Lev’s forwards caused you the most problems?”
“They all fired off a lot of shots, but I should mention (Justin) Azevedo. He’d found the key to unlock me, and all his shots posed difficulties. I didn’t even try to catch them; I was happy to just parry them. It often happens like that: he was largely anonymous during the regular season, but then he was awesome during the playoffs. But Lev has many: Jiri Novotny did so much for his team, battling away around the crease and obscuring my view. Azevedo scored a lot of goals, but about 80% of the credit for those should go to Novotny.” 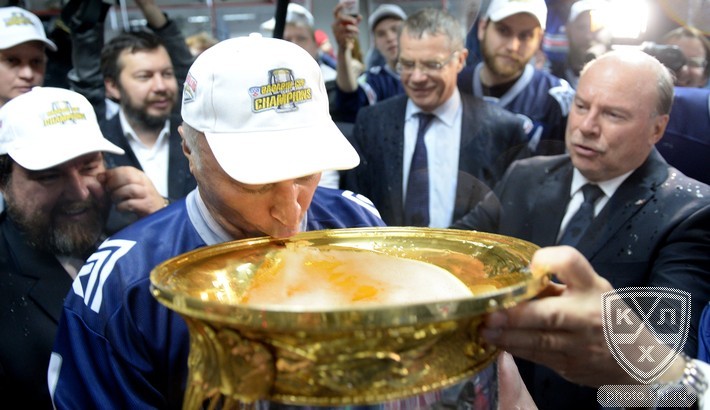 The celebrations in the locker room continued to a soundtrack of Russian and foreign rhythms, and the unexpected king of the dance floor was the Metallurg head coach, Mike Keenan, demonstrating some stunning moves in a victory dance to a Russian favourite, “Glass of Vodka,” by Grigory Leps. The boss was soon joined by joined Ilya Vorobyov, swiftly followed by the entire team. The steel city was dancing all night, from the joy of a hard-earned and thoroughly-deserved victory.