SKA vs Lokomotiv
The two teams had very different paths through round one, with SKA sweeping CSKA while Loko had a long-distance journey to depose defending champion Dynamo Moscow in seven. But top-class goaltending was the common feature for both teams with Alexander Salak and Curtis Sanford leading the stats for the men in the masks. 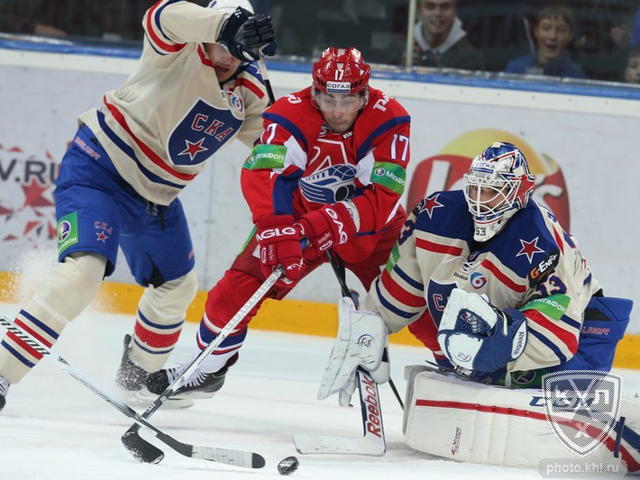 SKA’s Salak began the series with a shut-out in a tight 1-0 opener in St. Petersburg, and maintained an impressive save percentage throughout. He blocked 96.3% of the shots he faced, narrowly eclipsing Loko’s Sanford on 95.7%. In terms of goals allowed, though, it’s the opposite story: Sanford’s 1.29 – a figure boosted by giving up just two goals in his last three games – edges out Salak’s 1.42. Either way, forwards are likely to be in for a tough time in this series.

However, both SKA and Loko can call on players who have found their scoring touch at the perfect time. SKA’s Roman Cervenka looked well off the pace throughout the fall, but the Czech international kick-started his season with two goals against Dynamo on Jan. 15. That started a run of 10 points in the last 10 games of the regular season – plus a couple of goals against Slovakia to lead the Czechs to the Olympic Quarter-Finals – and he’s carried on into the play-offs. Eight points (3+5) in four games leads SKA’s scoring, and two crucial overtime deciders in Moscow made him the man most damaging to CSKA’s prospects. 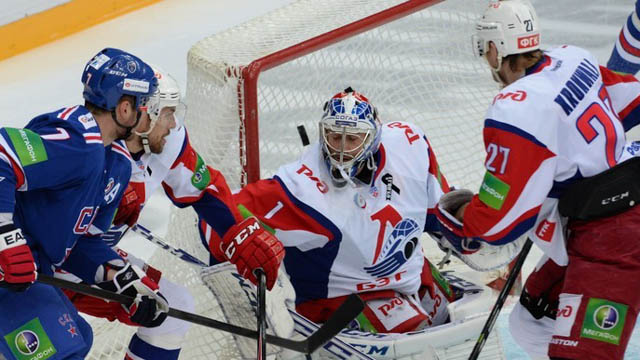 Cervenka, a silver medalist with Avangard in 2012, has a wealth of play-off experience – and so does Sergei Konkov, a double Gagarin Cup winner with Dynamo. His four goals helped end his former club’s reign and made him Loko joint top post-season scorer, but like Cervenka he suffered a difficult start to the campaign. Injuries kept him off the ice until Nov. 14, when he finally suited up for a 2-0 victory against SKA, and he mustered just three goals in 27 games. But the inspiration of facing a former club lifted Konkov’s game and when Loko finally cut loose to blast through a tight series he plundered four in the final two games to add to an assist in Game 3.

Head-to-head
Nov. 14, Lokomotiv 2 SKA 0
Nov. 18 SKA 1 Lokomotiv 2.
Lev vs Donbass
Two former team-mates in Sweden’s Eliteserien have been leading the scoring for these two teams. Lev’s Martin Thornberg and Donbass’s Teemu Laine were together at HV71 from 2008-2011, helping the Jonkoping team to the title in 2010. Now, though, they are bidding to help their KHL organizations become the first non-Russian team to reach a conference final. 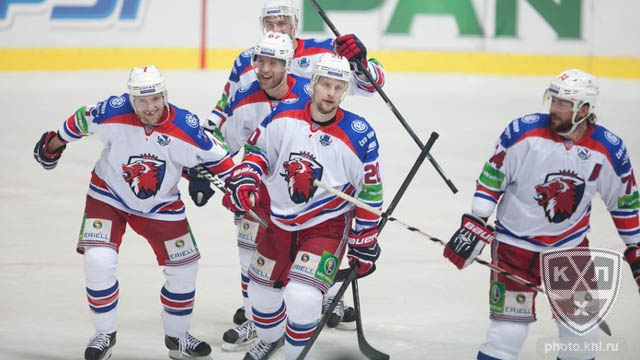 Thornberg, a Jonkoping native, spent most of his career at his home-town club before joining Torpedo in the KHL. He moved to Prague this season and topped the regular season scoring with 31 points (18+13). Come the play-offs, and a series against Medvescak, Thornberg continued to score heavily, finishing with 4+2 in four games, including game winners in the first two meetings in Prague and a double in the first game in Zagreb. The left-shooting 30-year-old also reached this stage of the play-offs with Torpedo in 2012, losing in six against eventual champion Dynamo Moscow despite scoring 3+3.

Thornberg’s fellow Swede, David Ullstrom, also landed some crucial blows against Medvescak, including the game-winner in a tight 3-2 win to complete the series sweep. Ullstrom, another former HV71 player, was traded to Lev from Lokomotiv in November and the 24-year-old has a reputation as a player whose form comes in streaks. After scoring twice in his last two games, Lev’s prospects will be greatly enhanced if that proves to be the start of an extended streak following a modest 3+1 return in his 18 regular season games.

For Donbass, meanwhile, the play-offs have been all about Laine. Fittingly, it was the Finn’s goal that secured the game seven victory over Dinamo Riga and extended the Ukrainian team’s first-ever play-off campaign. That strike also made him the leading goalscorer in round one of the play-offs, finding the net six times on his way to a nine-point haul. That’s a big upturn on his earlier 2014 form, which saw him pick up 2+4 in 13 and go scoreless in the four games after the Olympic break, but this scoring surge is little surprise to Dinamo Minsk followers who saw him score heavily in two seasons with a struggling team. 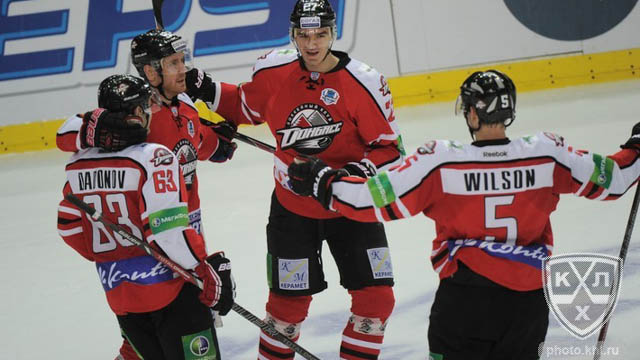 Back-up for Laine comes from Maxim Yakutsenya, a Gagarin Cup runner-up with Traktor last season and defenseman Clay Wilson. Both posted six points in the series against Dinamo Riga, while Wilson’s pairing with Slovakia’s Peter Podhradsky also proved to be the most miserly for a team which sometimes looked vulnerable at the back. For all the offensive potential on display, Donbass’s prospects may hinge on whether the 3-7 defeat it suffered in Riga was a one-off defensive aberration or evidence of serious problems at the back.

Due to the political situation in Ukraine, Donbass is unable to stage home games in Donetsk. Instead its games are expected to take place in Bratislava.