On Wednesday, March 19, representatives of Baltika, the famous beer brewer, and of the Kontinental Hockey League gathered in Moscow to sign a deal which extends their partnership to 2016. 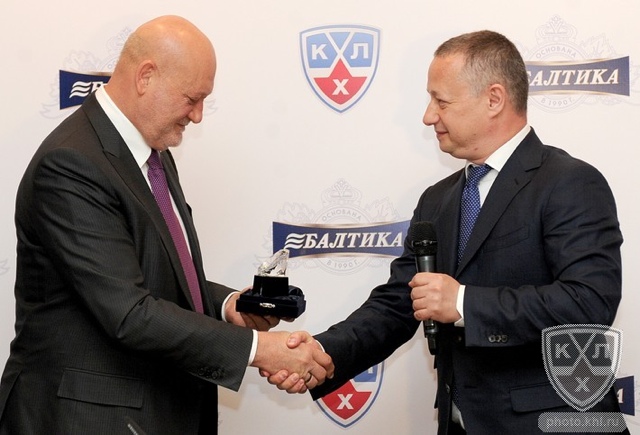 The agreement sees Baltika retain its status as the official beer of the KHL Championship through seasons 2014/2015 and 2015/2016. The funds invested in the project will be primarily targeted at support and development of sport across Russia, and the status of the official beer will be used in marketing communications companies in strict accordance with existing legislation.

Baltika became an official partner of the KHL in December 2012, since when there have been a number of joint advertising events staged at various local venues, as well as the launch of a national promotional campaign and the release of special, limited-edition versions of the Baltika 3 and Baltika 9 beers bearing the logo of the KHL.

Ilya Kochevrin said of the signing: “We are very happy to continue our cooperation with the Baltika brand, and we did not choose such a partner at random. Ever since the founding of the League, we have sought the chance to work together with a premium beer brand, and we had to tread very carefully because of the complexity of legislation governing any relationship between beer and sport. The League seeks to create a sustainable model for the development of our game, and our experience of having Baltika as a partner illustrates the success of this model. We have set a fine example for other sports to follow, and we have shown that beer and sport can coexist and cooperate.”

Isaac Sheps spoke of what the deal means to Baltika: “All through the history of our company we have lent our support to sport, which we view as part of the culture of the country. It is vital to blend in with the culture in which you work, and here we are demonstrating how a business should operate. The Carlsberg Group, of which Baltika is part, pays a great of attention to football. In Russia, hockey is no less important a sport, and so the decision to support hockey makes perfect sense. With the KHL we have found a reliable and suitable partner, and it is with great pleasure today that we extend the term of our relationship.”

When the signing ceremony was over, the Baltika representatives presented Ilya Kochevrin and Sergei Gimaev with a gift-wrapped limited edition of the classic beer, Baltika 3. This beer was brewed in December 2013 in St. Petersburg during the build-up to the KHL All-Star Game, with the help of, world, European and two-time Olympic champion Alexander Kozhevnikov. As a mark of gratitude for their participation in the brewing process and as an enduring symbol of the partnership, Baltika President Isaac Sheps handed Ilya Kochevrin an exclusive, miniature model of the brewing vat.

***
Baltika, now part of the Carlsberg Group, is one of the largest producers of consumer goods in Russia and has been the nation’s market leader in beer since 1996. The company has breweries in 10 cities across Russia and one in Azerbaijan and boasts a broad portfolio of brands. Baltika is also a leading exporter, accounting for 70% of all Russian beer exports, and its products are enjoyed by consumers in more than 75 countries around the world. According to Euromonitor, Baltika is the best-selling beer brand in Europe.
#sponsor
Share
Прямая ссылка на материал