The difference a few days can make. January 15 round-up

SKA seemed to be in trouble after a series of poor results either side of the New Year, but Wednesday’s 6-3 home win over Dynamo Moscow has transformed the mood around the Petersburg club.

Following Monday’s win over Eastern Conference leader Ak Bars, it makes it two out of two against some of the top contenders for Gagarin Cup glory and injects new belief into SKA’s bid for a debut honor.

Although the triumph was perhaps a little closer than the scoreline suggested, it marked a welcome return to scoring form for SKA, and Roman Cervenka in particular. He scored twice, as did Tony Martensson, while Vadim Shipachyov and Ilya Kovalchuk completed the accounts for the home team.

Dynamo recovered from 1-5 to 3-5 in the final session thanks to goals from Leo Komarov and Alexei Tsvetkov, but always had too much to do after a disappointing second stanza. After two Conference Final defeats to the Moscow team, SKA now has two convincing regular season wins over its old rival – might it be third time lucky in post season? 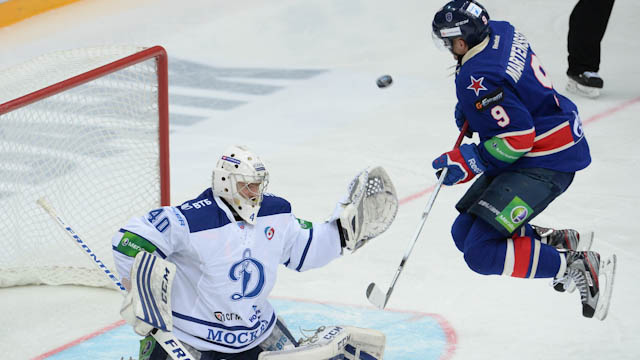 Ak Bars books play-off spot
Ak Bars became the second team to confirm its play-off place thanks to a 2-1 win at Severstal.

The Kazan team returned to the top of the Eastern Conference with Wednesday’s win, but didn’t have it all its own way in Cherepovets. Evgeny Kovyrshin put the hosts ahead early in the second period, only for Mikhail Varnakov to tie it up in the 26th minute. Then Janne Pesonen’s 55th-minute goal secured the points, and the post-season spot, for Ak Bars.

Biryukov proves his worth
CSKA has been very active as the KHL transfer window slams shut – but the decision to jettison popular goalie Rastislav Stana after he returned to full fitness has baffled many. Home fans spent much of Wednesday’s game chanting the name of their former netminder, but it was new boy Mikhail Biryukov who left with the plaudits after steering his team to a shoot-out win over Sibir.

He made two saves from the three shots he faced – with shoot-out specialist Ilya Proskuryakov remaining on the bench this time – as Alexander Radulov settled a game which had tied at 2-2 in regulation.

But much of the evening’s action highlighted how far CSKA is from achieving its ambitions. While Sibir is a solid opponent, it hardly represents the most daunting challenge in the league, but was still able to lead thanks to Dmitry Monya’s second-period goal. It was also notably that Monya and fellow Sibir scorer Dmitry Kugryshev were both former Army Men. In the end Alexei Morozov forced the tie and spared the team’s blushes, but January’s transfer activities need to deliver fast if CSKA is to translate spending into play-off success. 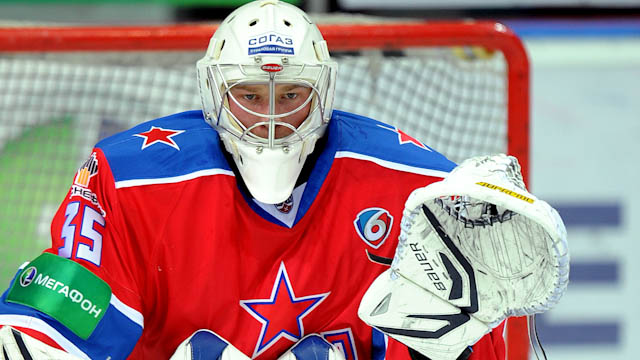 Around the league
High flying Dinamo Riga had to battle hard before overcoming bottom club Metallurg Novokuznetsk in overtime. Metallurg led twice before tying 3-3 in regulation thanks to two goals from Evgeny Lapenkov; Paul Szczechura got the winner 18 seconds into the extras after Gunars Skvortsovs had scored two in regulation for Dinamo.

A strong second period at home to Admiral saw Lev tighten its grip on third place in the West. Unanswered goals from David Ullstrom and Michal Repik broke a 1-1 tie and paved the way for a comfortable 4-1 victory.

Atlant won 2-1 at Vityaz in the clash of the Moscow Region teams. Sergei Shmelyov and Maxim Mayorov got the goals that moved Atlant to within four points of the top eight. 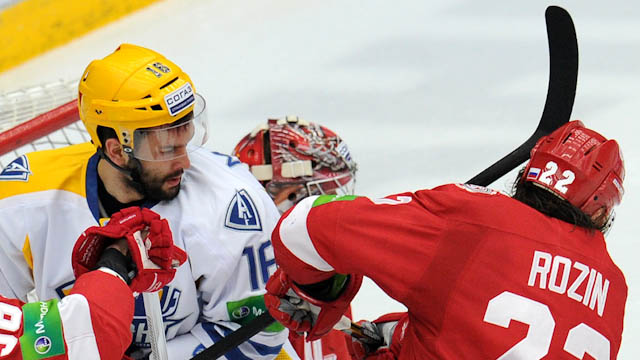 Lokomotiv’s hopes of holding on to eighth took a knock in a 4-1 defeat at home to Torpedo. Maxim Potapov scored the first and last goals of the game, Wojtek Wolski and Vladimir Denisov got the others for Torpedo.

Libor Hudacek got the decider for Slovan in a 3-2 home win over Amur. The teams traded four goals in the second period before Hudacek struck in the 48th minute.