The two-day All-Star Game program got underway on Friday evening with the traditional veterans’ game,  and while the names of the protagonists, Team Rusnak and Team Yakushev followed the tradition of such friendly encounters by bearing the captains’ names, the game itself more resembled a remake of the fierce USSR vs Czechoslovakia clashes of the two nations’ glory years.  Those encounters had always been laced with a special drama which gained added spice after the events in Prague in 1968. Former Soviet internationals can regale you with a thousand anecdotes about relationships with their Czechoslovak counterparts, and similar reminiscences can be found all over the Internet. The Cold War world is now gone and its politics no longer cast a shadow over sport, but good, clean, competitive hockey is still very much alive.

Few of the Russian team need any introduction: Vladimir Myshkin, Valery Kamensky, Helmut Balderis, Andrei Kovalenko, Sergei Shepelev, Alexei Zhamnov are all household names, but perhaps we should devote a few words about the number 97, Roman Ilyin, making a return to the Slovnaft Arena ice after a gap of fourteen years. A two-time champion of Russia with Dynamo Moscow, he moved to Bratislava in 1997 to play for Slovan and was twice champion of Slovakia with the club before leaving for Yaroslavl in 2000. A few hours before the game he was using his phone to photograph his former home arena - he says it has changed beyond recognition - before taking a stroll to the house in which he and his family lived for three years. 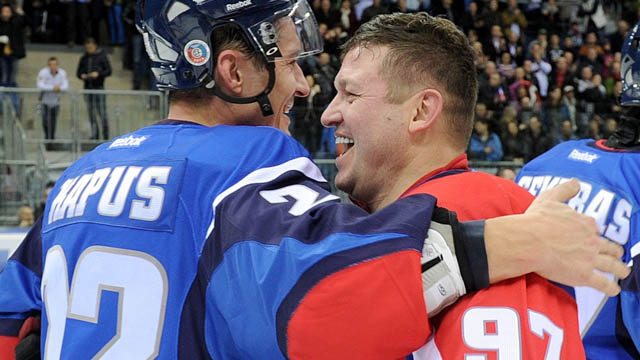 “When we won our first Slovak championship, with an overtime victory against Kosice in the fifth playoff game, the fans invaded the ice and carried us all back to the locker room,” Roman recalled. “The celebrations went on all night and I don’t really remember what time I finally came home.”

Bratislava certainly remembers Ilyin, so much so that when he stepped outside the hotel entrance he was under instant siege by an army of adoring local fans and spent half an hour patiently signing autograph books, hockey cards and photographs.

The Czechoslovak hockey legends were no less illustrious, with a goalkeeping squad comprising Petr Briza, Pavol Rybar and Roman Cechmanek. Briza was a permanent fixture between the Czechoslovak pipes all through the 80s and the first half of the 90s, and won Olympic bronze in 1992. He played until the age of 41 and for the past six years has been Sparta Prague’s general manager. Chechmanek graced the NHL from 2000 to 2004, donning the colors of Philadelphia before crossing the continent to Los Angeles, helped the Czech Republic to Olympic glory in 1998 and won four more gold medals at the world championships. Amur fans will remember Rybar, one of the first foreigners to cross several time zones to play for the men from the Far East, where he was surrounded by rumours about the size of his salary.

Also facing the Russians was defenseman Vladimir Kames, who moved across the ocean straight after the World Junior Championships and ignited a scandal in the process; forward Otakar Janecky, a legend at Finland’s Jokerit, where his jersey still hangs from the stadium roof; Ladislav Svozil, the left-winger who became the first player from Czechoslovakia drafted by an NHL club when Detroit selected him at No. 14 in 1978; plus Igor Liba, named Czechoslovakia’s finest player of 1984; Richard Kapus, who played for Novokuznetsk under today’s Russian legends’ coach, Boris Mikhailov; and last but not least, Darius Rusnak, after whom the team is named, and who starred for Czechoslovakia at the Canada Cup in 1981, won Olympic silver in 1984, and in 1985 scored the goal against Canada that clinched World Championship gold for his country. 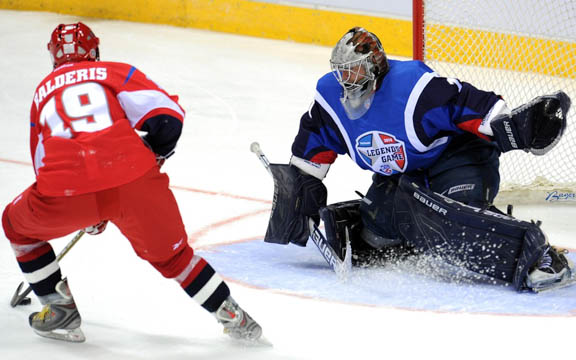 Suffice to say, every player in either team is worthy of inclusion in anyone’s history of our beloved game.

When the action got underway it was the hosts who enjoyed the brighter start and spent the opening minutes practically encamped around the visitors’ goal. Vladimir Myshkin showed admirable reflexes to parry a precise 4th-minute shot from Jan Varholik, but a mere 30 seconds later he was beaten by Igor Liba. This seemed to be the trigger for a Russian rally, and there was soon a warning sign for the hosts when the guests spurned a 2-on-1 breakaway. The reprieve, however, was only temporary, and even Petr Briza could not prevent the Russians from scoring three times before the first interval, with an Igor Varitsky leveler followed by a pair of sublime penalty shots from Helmut Balderis and Alexei Zhamnov, neither of which would be out of place in any top ten.

The home team came storming back in the second stanza and within six minutes successive efforts from Zdeno Ciger, once a linemate of Roman Ilyin at Slovan, and Otakar Janecky had tied the affair at 3-3.

“Were you not tempted to agree with your opponent to play out a tie?” asked the KHL-TV commentator, Dmitry Fyodorov, of Andrei Kovalenko during the game.
“We'd never do anything of the kind. We either play to win, or we see how it goes.”

And the deadlock did last very long. By this time, Maxim Mikhailovsky was on duty in goal but he had to pick the puck out of the net twice before the end of the period, as Janecky notched his second and a minute later Ivan Droppa made it 5-3. The Russian coaching staff remained unflappable as ever, obviously reasoning that a goalie of Mikhailovsky’s quality needed no advice, not even from two-time Olympic champions.

The hosts went into the break with their winning margin halved, thanks to a strike by returning hero Roman Ilyin, deftly getting the better of Pavol Rybar in a one-on-one. Ilyin’s agility during the game was a revelation, especially considering he has undergone two operations on a damaged Achilles tendon and walks with a pronounced limp.

The encounter had attracted around eight thousand Slovak fans, and they generously applauded every fine touch from both teams. In the second period, there was even a memorable ovation for KHL president Alexander Medvedev, albeit for his chivalry. 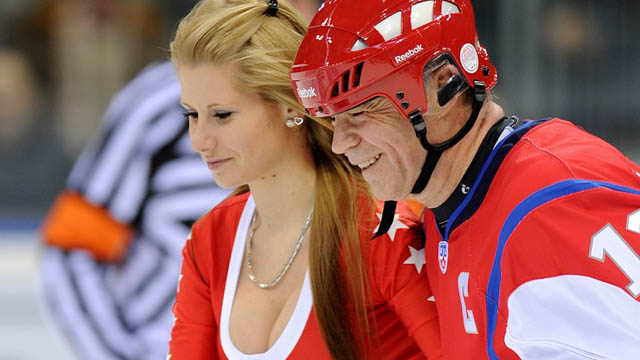 The Russian captain was first to come to the rescue of a damsel in distress, in this case one of the sweeper girls, of whom, it is fair to say, none were selected for their skating ability alone. When one of these ladies was struggling during a commercial break, Medvedev gently helped her off the playing surface, to a background of warm applause from the stands.

The final period turned out to be a drama straight out of the Classical era. With 12 minutes to go, Nikolai Syomin restored parity, but then strikes from Miroslav Glinka and Richard Kapus gave Team Rusnak a seemingly unassailable lead. The passion increased and the tension likewise, to the extent that Fyodor Kanareykin and Oldrich Valek came close to swapping punches.

“We were losing, so I thought I’d fire up the team somehow” said the Spartak head coach later.

The tactic certainly worked. In the final 30 seconds of regulation, Andrei Kovalenko coolly put away two penalty shots, the second of which was awarded by Paul Stewart, currently the KHL president’s refereeing advisor, a mere three-tenths of a second before the siren was due to sound. The final word in overtime went to Nikolai Syomin, whose unstoppable shot sailed past Pavol Rybar to seal a thrilling 8-7 victory for Team Yakushev.

“I was on duty as a commentator at this arena two years ago at the World Championships, and so I was very glad to be back here today,” said Sergei Gimayev after the game. “The atmosphere is fantastic, so I want to sincerely thank all the Slovak fans. As for the game, it got quite heated and reminded me of those matches between the USSR and Czechoslovakia back in the 70s and 80s.”

“How would the TV pundit Sergei Gimayev rate the player Sergei Gimayev’s game today?”
“He would it say was a long way from being his best ever display.” 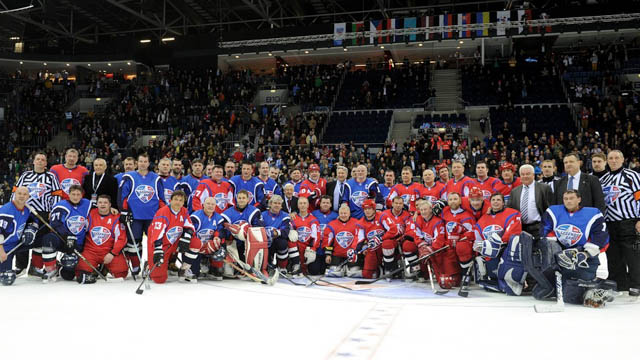