Moscow, Minsk, Saint Petersburg, Riga, Chelyabinsk ... Five cities in the vast KHL map. Five cities where the All-Star Game became a landmark event, in stadia packed to the rafters by fans who took genuine pleasure from being so close to the great game. As each city accepted the baton from its predecessor, it added its own new ideas and discoveries, but most importantly, each new host city preserved the unique festival atmosphere which is a hallmark of this contest of the finest stars in the Kontinental Hockey League.
And now the All-Star Game moves to the heart of Europe: Bratislava, the city on the Danube renowned for its love of hockey and passionate support of its illustrious club, Slovan. A city where thousands gather in the summer months just to watch a preseason friendly, while in winter the demand for tickets to KHL regular season games outstrips supply to the extent that a stroke of luck in a competition or on-line auction is the best chance of success. Here, hockey is not just a sport but a way of life, so it is justice indeed that the sixth KHL All-Star Game is to be held in the Slovak capital. 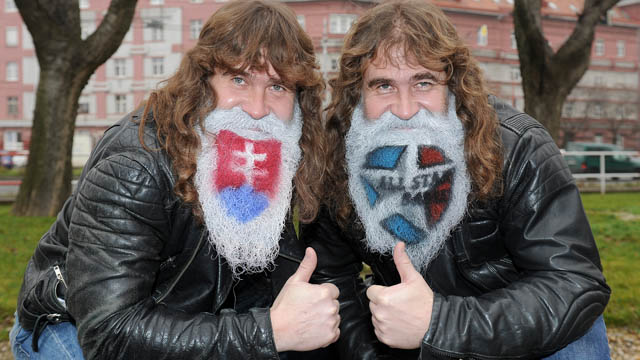 The 2014 event follows the previous year’s format in which the festivities stretch over two days. The main day is undoubtedly Saturday, featuring the game itself plus the popular Master Show Skills Competition, and the two highlight events are separated by an interval of just twenty minutes, during which the fans and millions of TV viewers will be treated to the glittering opening ceremony.

On Friday, stepping onto the Slovnaft Arena ice will be two teams of truly legendary veterans of Russian and Czechoslovak hockey. These stars of the past are sure to delight the fans with their timeless skill, and allow us all to bask in warm, fond memories of previous battles between these national heroes throughout the rich and wonderful history of international hockey. The Russian veterans arrived on a charter flight on Thursday evening and were in fine form and good spirits in the hotel on the eve of another battle against their old rivals.
“Lights out by eleven!” – came the familiar order from two-time Olympic champion Alexander Yakushev, one of the troika of coaches, along with Boris Mikhailov and Sergei Makarov, in charge of the Russian contingent. The veterans’ arrival at the hotel was delayed, but for the best possible reason – before they could reach the foyer, they were met by a horde of Slovak fans, each of whom received a priceless autograph from these stars of world hockey. One name missing, unfortunately, is that of Vladimir Lutchenko, laid low by the common cold, so his place has been filled by yet another Olympic champion, former Ugra head coach Sergey Shepelev.
Meanwhile, at the arena, an army of specialists are performing all the meticulous final preparations for the big event, rigorously testing everything from lighting and sound equipment, to the playing surface, security systems and working conditions for the mass media will all run smoothly, all against a background of continuous rehearsals for the Master Show and the opening ceremony. The Super Skills Competition, to use the Master Show’s alternative title, will also follow the much-loved formula, comprising the Fastest Skater, the Relay, the Hardest Shot, the Goaltenders’ Competition and the Captains’ Duel, but this certainly does not mean there will be no surprises. After all, who could forget Vladimir Tarasenko’s outrageous shootout finish in Riga, watched again and again by millions around the world, or Mikhail Anisin’s rendition of O Sole Mio, or the unbelievable figure-skating displays from Ilya Kovalchuk and Alexei Morozov in Chelyabinsk? So if you were not one of the lucky few to obtain a ticket for the Slovnaft Arena, be sure to watch the live coverage on KHL-TV and make sure you don’t miss a single exciting second.
All this is swiftly followed by the All-Star Game, which promises to be at least as thrilling and unpredictable as the previous five. The rosters are not only the finest athletes in all the KHL, selected by both fans and journalists, but the League also had a hand in ensuring that practically every team is represented. This means that in addition to cheering on Team East or West, supporters can also follow the exploits of one or more of their own team’s heroes. And not just the players – last year’s contest between the mascots of every club in the KHL was such a roaring success that it will be repeated here in Bratislava.
This sixth All-Star Game takes place just a short while before the start of the Winter Olympics, so competing on the Slovnaft Arena ice will be ten of players who in under a month will be battling for gold in Sochi. Yet another reason, as if any more were needed, to spend this Friday and Saturday in the company of the brightest stars of the Kontinental Hockey League.
#ASG
Share
Прямая ссылка на материал