Alexander Selivanov: I played on with a severed finger

One of Hannu Jortikka’s assistants in Admiral of Vladivostok is Alexander Selivanov, one of the most famous names in Russian hockey. He spoke to our correspondent on being Phil Esposito’s son-in-law, on why he never played at the Worlds, and on his reasons for playing a couple of seasons in the Netherlands.

The Netherlands! Why?
“It wasn’t far from my home in Germany, so I just got in the car and went. The Dutch championship is not the greatest, of course. There are three useful teams, more or less, and obviously the rest are weak. But the owner of Den Haag really loves his hockey, he wants to win and he put quite a good team together.”

Is it true they compared your team with Chelsea FC?
“I don’t like Chelsea, so we’ll say Manchester United, in that we had a decent budget compared with the opposition, we imported decent players from outside the country and of course, we won the championship.”

When I told the Dutch border official that the purpose of my visit was to watch ice hockey, he almost went into shock.
“I’m not surprised. Our sport is a long way from being one of the most popular among the Dutch people. They love football, speed-skating… even field hockey is more popular.”

One guy with you was Viktor Ignatiev, now a coach at Dinamo Riga. He said you were a true professional, despite all the temptations on offer in the Netherlands.
“You have to be careful wherever you go, because everyone finds out straight away. It’s a small town and rumors spread like wildfire. You ask for a glass of beer and by morning you hear that you were rolling around drunk. So I spent a lot of time with Viktor. He lived nearby, he’s a great cook and I loved eating the food he made.”

The year before you were playing in Germany. Why did you leave?
“I realized I wasn’t going to achieve anything. My head was fine, my arms were fine, but my speed had deserted me. It was a horrible feeling and I knew the time had come.” 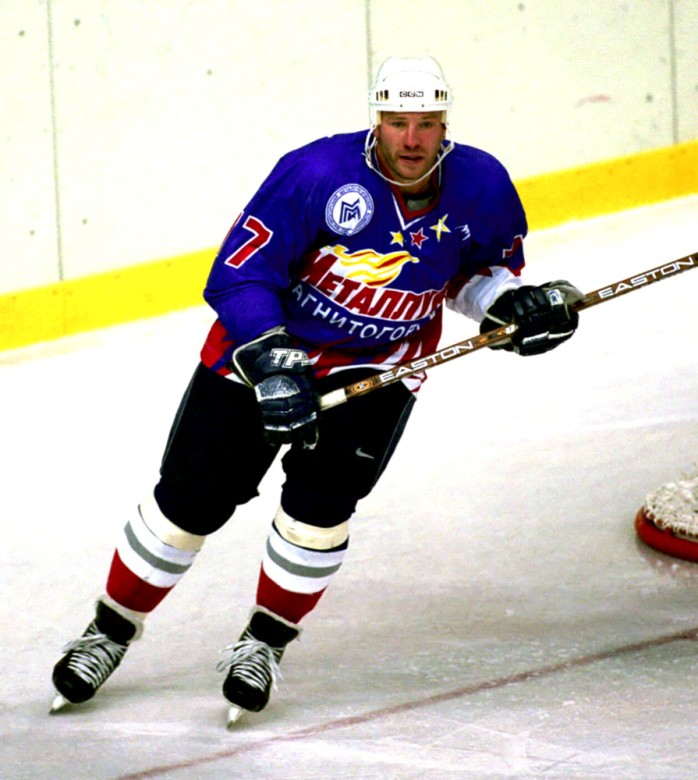 You had a short spell with Metallurg Magnitogorsk in 2003. Did you not enjoy it?
“No, I liked it. It was a fine team and the financial side was good. But I was a bit perturbed… How shall I put it? I didn't want to take pills.”

There was doping?
“I don’t know. I just don’t like pills of any kind, and they were suggesting tablets for this, for that, for the other. I could’ve done without that.”

And you moved to Saint Petersburg, but only played 20 games.
“One day I just walked in and said I’d had enough. I’d left Russia to get away from it, and here I was back in the Soviet era.”

In what way?
“It’s all that time at base, I just can’t do it. We would get one night a week at home and spend every other night in camp. We would be shut away there for a day before a game, and sometimes they’d take us back there afterwards. Not for me.”

And of course Boris Mikhailov, Petersburg coach at the time, is fond of them.
“I had a wife and three children, left alone, and I could do nothing to help them. It’s a terrible feeling, all the time wondering how things are at home and there’s nothing you can do. Why have team bases? Every professional should be capable of getting ready for a game.”

Many teams spend the night before a game in a hotel.
“What’s the point?”

Well, you have three children. Let’s say one of them is playing up, can’t sleep, wants to play, then how can you prepare for a game?
“Listen, in the NHL they also have players with many children, and you know what? They manage to get ready to play. I’ve never understood how a player is supposed to give his all at the game if his mind is occupied with possible problems at home.”

Shouldn’t you have discussed it with Mikhailov?
“And ask him to let me live at home, but confine all the others to base? No, I decided it was best to leave, and in any case I had an offer from Germany. I didn’t really need to go to Petersburg anyway, but my wife wanted to see the city.”

Do the teams in Germany not have bases?
“It’s completely different. Your family is always with you, and in the evening you can take your kids skating or go for a walk. I have a wonderful house and a good car. Everything is neat and compact and there are no traffic jams. When everything at home is fine, you arrive at work in a good mood. In Petersburg it felt like going to a prison camp.”

Do you speak German well?
“I don't speak it at all, to my shame. The funniest thing is that I want to apply for citizenship, but they have an exam. I need to sit and learn like a schoolboy, but the language just doesn’t stick in my head.”

How did you communicate with people there?
“Most of the players were from North America and my English is excellent.”

You went to America without knowing the language?
“Hardly a word. I arrived in Tampa, where there was not a single other Russian speaker, to join 75 men battling to break through into the team, and to them you’re a rival, an enemy. Fights were common.”

Were you in fights?
“I wasn’t, but they did break out on the ice. It was a serious test and I came through it with no help from anyone. “

How did you read the daily schedule?
“My wife helped me out.”

Phil Esposito, your father-in-law, once said in an interview that you always seemed to have a new car. How many did you wreck?
“I’ve no idea what he’s talking about. Maybe he’s joking. I’ve never been in a car crash – not even a minor bump. He should be coming to Russia soon, so I’ll ask him.”

I notice Phil Esposito’s attitude to our country has mellowed.
“He’s from that older generation that heard a lot of scare stories about the USSR, and his visit to the country did not do much to change his mind. He was almost arrested, among other problems. But it’s a different country now, and Phil knows this. What’s more, Esposito is even more popular in Russia than he is in Canada, surprisingly.” 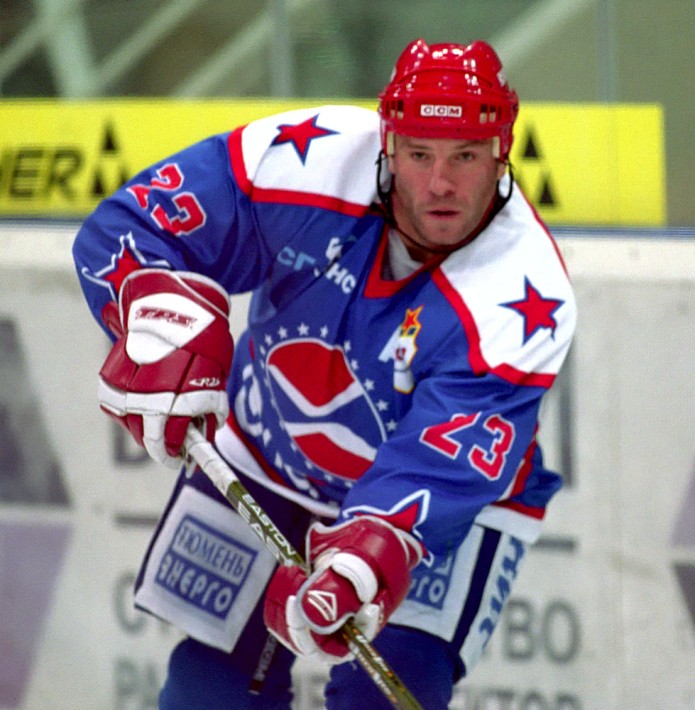 When did the other Russians move to Tampa?
“Alexander Semak was first, then Igor Ulanov. Igor is a formidable and fearless guy. They gave him the task of stopping Eric Lindros, who was like a god at that time, but Ulanov did such a good job that Eric was pretty anonymous in the game.”

They say you were quite fearless yourself, and were in no hurry to go to hospital after an injury.
“Once at Tampa I was struck in the face by the puck. I didn’t pay much attention to it and played out the third period, but later on the plane the left side of my head started swelling. They brought me straight to the doctor and it turned out that my cheekbone was fractured in three places.”

It must have been a shock to the doctors.
“Yes, they could tell just by looking at my face. I once played on after severing a finger.”

Good God!
“It was in Germany. I took a blow to the hand from someone’s stick and part of my little finger was torn off, but I played on anyway, even though there was blood streaming from the wound. We won, and I scored the game-winner.”

Was it an important clash?
“Well, a victory for us would prevent our opponent from getting to the play-offs, and a team from another city would qualify instead. We won, and afterward I received a letter of thanks from the fans of the other club.”

What is it like playing with part of your finger severed?
“I could still hold the stick and play the puck with accuracy, so it wasn’t too bad. But I had to show the guys in my team that you must battle till the very end. I once played out a season with a shoulder injury. I needed an operation but there was no time.”

I notice your nose is squashed to one side.
“It’s been broken twice. Once it got in the way of someone’s elbow, and once a teammate broke it.”

What happened?
“I’d just skated to the bench when one of our players slapped the puck out of our zone and I took a direct hit. He was a young guy, only 19, and we never let him forget it!” 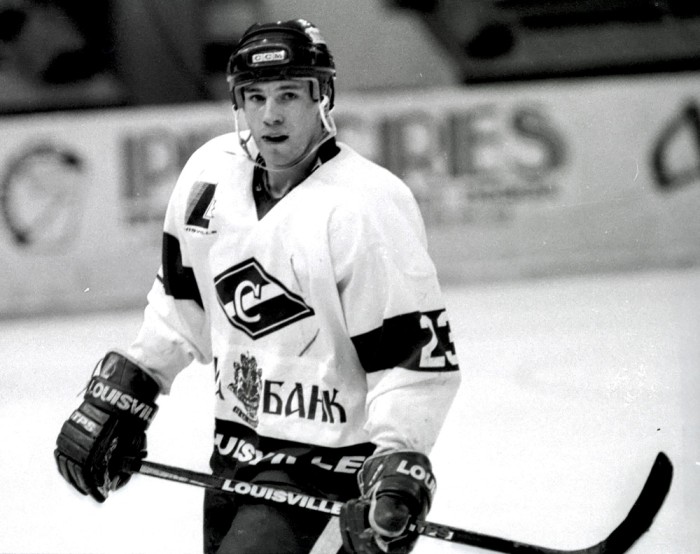 You never played in a World Championship. How come?
“I could write a whole book about that. But after 1993 I refused to play.”

You’d had enough?
“The last straw came in 1993. The front Spartak’s troika of Tkachuk, Barkov and myself was the highest scoring in the country, and yet we were just the fifth line in the national team They were always dropping us just before setting out for a tournament, and in 1993 they went too far. Barkov picked up a minor injury but they sent all three of us home.”

What did they say?
“They said that we weren’t needed individually, only as a line, and now the line couldn’t play. But previously they had sent us home when we were all fit. Hearing those words really offended us. I remember we went to the Spartak office and gave the news to club president Gelani Tovbulatov. He was in such a rage.”

But there was nothing he could do.
“No. But he gave us some money out of the safe and told us to go to Munich, where the national team was playing, and have a good vacation.”

Did you meet any of the players from the national team?
“Of course we did, and they looked at us with a hint of envy.”

Were you called up for national team duty after that?
“Two or three years later I got a call from Vyacheslav Fetisov and we talked about it, but I had already booked tickets to go with my wife to a resort and I decided the vacation was more important. And of course, after all I’d been through with the national time, I had no real desire to go back.”