“We’ll get no mercy this season”. Admiral is training hard

KHL newcomer Admiral of Vladivostok continues its training in Odintsovo, just west of Moscow, and head coach Hannu Jortikka is already smiling far more frequently than in his first few days in the job. The team will be based in Moscow Region until the 3rd of August before heading off for a preseason tournament in the Czech Republic.

Joakim Lundstrom has that old European custom of greeting anyone who makes eye contact with him. I learned that Admiral’s Swedish goaltender is in Russia on a tourist visa, a circumstance which bars him from training, and I took advantage of his enforced leisure to ask him how he is doing.

“I was surprised at how few people in Russia speak English, but I’m going to learn Russian anyway.”

Joakim is every inch a goalie, with that peculiar mix of restraint and eccentricity. For example, he decided the best way to start learning Russian was to read Dostoyevsky’s classic, The Idiot, from cover to cover. When asked about Vladivostok, he was typically succinct:

“I know that it’s the last station on the Trans-Siberian Railway.”

Are you aware that Russia and Sweden have been at war in the past?

“Yes, but that doesn’t bother me. I wasn’t there,” the netminder answered, laughing.

He has already mastered a number of Russian phrases. 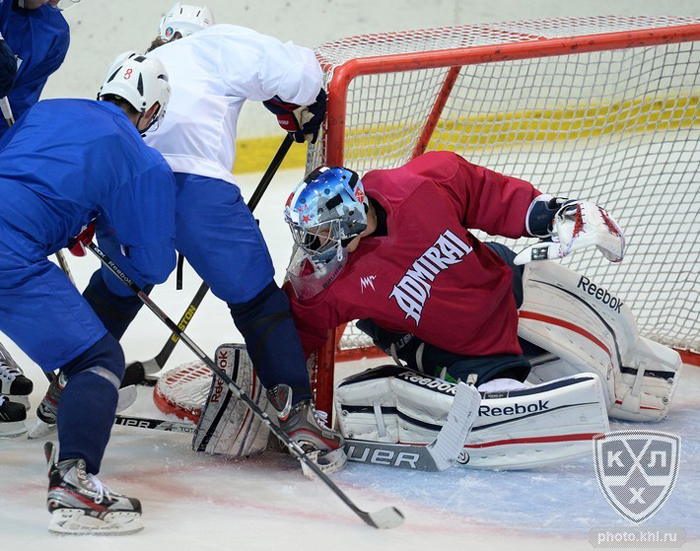 Sergei Barbashev came close to spending the entire preseason without a club. He turned down a new contract at CSKA in favor of signing for the Far East men, but that deal was held up when his agent could not agree terms.

Rumors swiftly spread that Sergei’s agent was asking Admiral to double his client’s salary or else the player would leave for the Americas.

Barbashev is adamant: “I even agreed to have my wages halved. In any case, I wouldn’t stay at CSKA. I’d had enough. I played for the club for many years, but was given less and less time on the ice.”

It is not every day one hears of a young player with a Russian passport taking a cut in wages.

“It’s OK. I’m still young enough to think of things other than money. I’ll get by.”

When Sergei was put forward for the extension draft and chosen by Admiral, it was a happy moment: “Last year I even enjoyed going to the farm club, even though I played there quite a lot.”

In the first few days of training, Hannu Jortikka could be seen sporting a slightly apprehensive expression as he watched his new team from the stands, but that has changed. He still does not venture out onto the ice, but his manner is far more cheery.

Dmitry Afanasenkov and Pavel Vorobyov have already gone. These are the kind of experienced veterans who would suit a new club, but not Admiral, apparently.

“They are mature players; I simply decided that they would not be much help to me this season,” Jortikka shrugged.

Andrei Nikitenko is no spring chicken, but he stays at the club. The specialist from Finland is yet to explain the logic behind this, but he obviously sees things others do not.

While the squad is indeed taking shape, the players are still at the getting-to-know-you phase. Closer bonds are yet to be forged, but neither is there any sign of internal strife. Enver Lisin appears a little aloof and Nikitenko cannot have much in common with his teammates, but the young players make friends far more quickly.

“We have already officially accepted Sergei Barbashev,” said Alexander Kuznetsov with a chuckle. “My wife brought in an excellent dinner; I ate most of it, and let Barbashev have the rest.”

In the evening Alexei Ugarov was strolling in the park by the Olympiets Hotel with two companions in quiet contemplation.

Jortikka, in contrast, struck up a lively discussion with his two assistants, Alexander Selivanov and Artur Oktyabryov. They spoke in English, but the subject matter was clear: they were talking about players.

Admiral’s general manager, Alexander Filippenko, has accrued more air miles in these past two months than most hockey folk cover in an entire season. Fresh from tackling a few problems at Odintsovo, he finished the week by flying out to Vladivostok for a meeting with the Governor.

“Please do not be too harsh on us,” he pleaded.

I wouldn’t dream of it.

“I trust you’ll understand why we have the occasional mishap and a few problems with the roster. Two months ago we had no idea that the team would be playing in the tournament.”

Filippenko earlier worked at Amur, and it was during his time at Khabarovsk that a new currency appeared – a game ticket. The Admiral boss clearly has plans for something similar at Vladivostok.

“All you need to do is play well. But so far your roster is still weak,” I ventured.

“It is not for want of trying to get quality players to sign contracts, but it’s finding them. We’ve brought in some from the draft extension, had a look for free agents and pursued some foreign players, but there are technical obstacles to bringing in players from outside Russia. We can’t sign them on short-term contracts.” 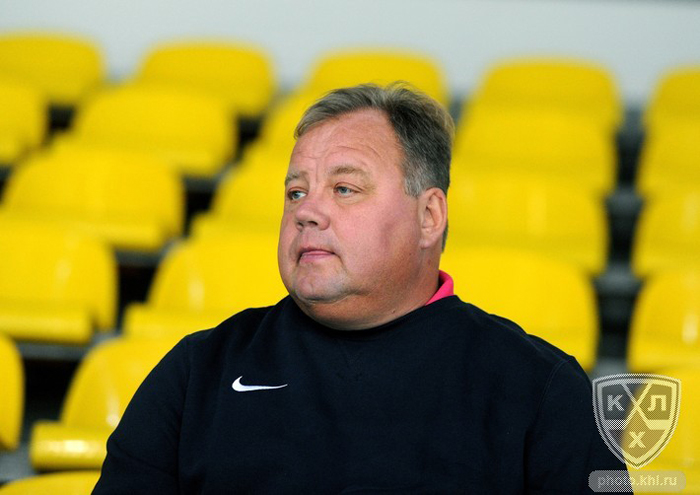 Admiral already has two practice games under its belt, and while its teams looked lively in the first encounter they visibly flagged in the second. This was not just due to the tough training regime, but also the gruelling format of the game: a full two hours on the ice, combined with the inevitable increase in the workload of players in such a sparsely-populated roster, so that one team played an entire period with only two attacking lines.

“Everyone’s tired,” Jortikka sighed. “Although there was a lot for me to like in the first period. But we’ll play again on Saturday, and make more changes to the line-ups. If you know of any free defensemen, let us know.”

Jortikka went back to the hotel in a contented mood, possibly reminiscing about previous episodes in his life, such as his favorite story about when he travelled to the USSR with the Finland junior team.

“We were staying in the Rossiya hotel, where it was nearly 2km from one entrance to the other. Our administrators were run ragged!”

After the USSR, there was little that could surprise Jortikka in Khabarovsk.

“You know, we can make these excuses for problems with the roster during our preseason training, and I’m happy to lament the lack of this or that,” Jortikka said with a smile, “but during the Championship no-one is going to show us any mercy, and the players must grasp this.”

The players standing nearby heard the conversation. At times like these, there is no such thing as useless information.