On the ice, the playoffs are in full swing. Three of the four Conference semi-final pairings are set, and we’re waiting for a game seven showdown in Moscow in Monday. Off the ice, NHL legend Mario Lemieux added his voice to those supporting Avangard prospect Ivan Miroshnichenko in the teenager’s battle with Hodgkin’s Lymphoma.

The situation in the West is still uncertain. Monday sees Dynamo Moscow take on Severstal in game seven of that first-round series. So far, the clash has ebbed and flowed. Severstal won twice on the road in Moscow before the Blue-and-Whites bounced back with three straight victories – including the first home win of the series in game five. But the Muscovites could not finish the job and lost 3-2 in Cherepovets in game six to set up today’s winner-takes-all showdown. The winner will advance to face CSKA in the conference semi-finals.

The other pairing is already set. Table-topping SKA will face Spartak in a repeat of the first-round match-up from 2019. SKA booked its place with a sweep of Dinamo Minsk, eliminating the Belarusian team for the second season in a row. Roman Rotenberg’s team is dominating the scoring charts at the moment with Andrei Kuzmenko and Nikita Gusev both on eight points from four games. Spartak, meanwhile, has yet to play in post season. The Red-and-Whites were slated to play Jokerit Helsinki in the opening round of the playoffs. However, the Finnish team withdrew from the competition, giving Spartak a walkover into the conference semis. The Red-and-Whites’ last competitive game was on Jan. 9, prompting forward Andrei Loktionov to suggest that this was, in effect, a third pre-season for the team.

The hockey world is rallying round young Avangard prospect Ivan Miroshnichenko, recently diagnosed with Hodgkin’s Lymphoma. The 18-year-old is currently receiving treatment for the condition in Germany – and was boosted by NHL legend Mario Lemieux, who suffered from the same condition in 1993. Super Mario made a full recovery, going on to win the Art Ross Trophy in 1996 with 161 points, and he was delighted to join a video call with Ivan to offer advice and encouragement as the youngster fights his own battle with the disease. Prior to his illness, Miroshnichenko came to prominence with eight points in seven games at last year’s U18 World Championship. Draft eligible this summer, he had been ranked as high as #4 in some lists.

Story of the week: Amirov and Miroshnichenko battling to keep careers 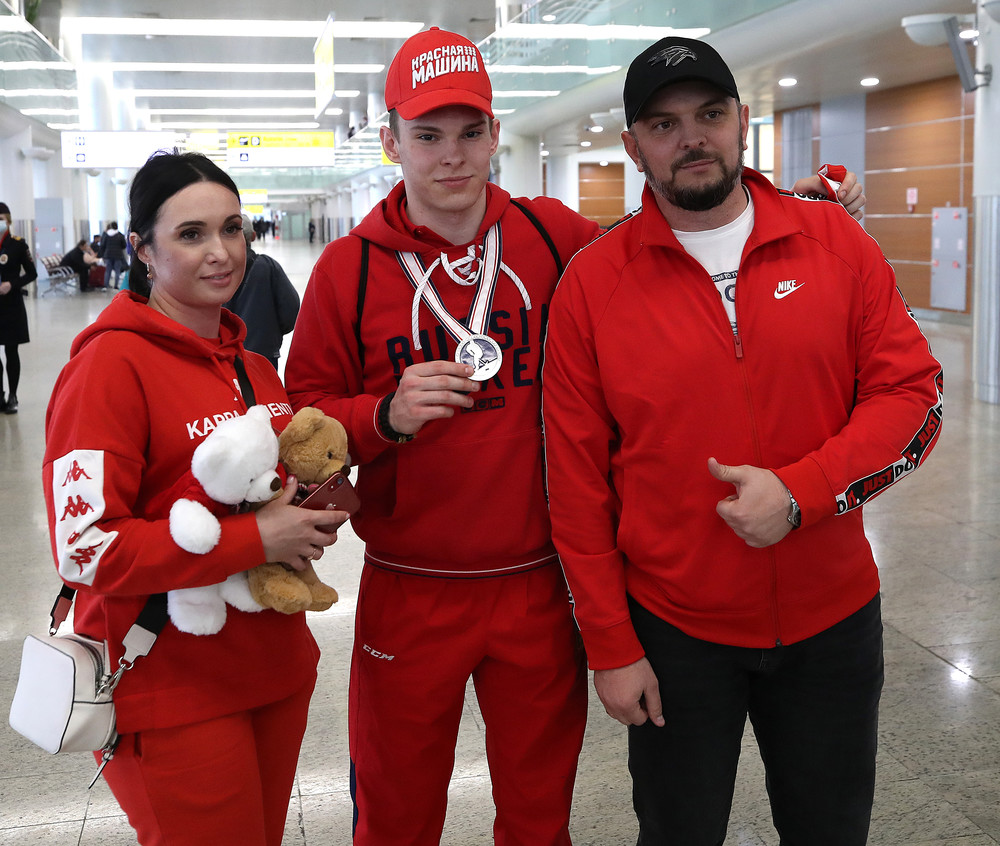 Denis Zernov lifted the Gagarin Cup with Avangard last season and now he’s trying to repeat that achievement with Metallurg. This week saw the 26-year-old pot his first career hat-trick to help Magnitka to a 5-2 victory in game four of the series. Interestingly, the center has 5 (4+1) points in one round of this year’s playoffs, compared with 6 (2+4) in the whole of Avangard’s triumphant campaign a year earlier.

The second edition of Mascots Mania, the KHL’s contest for the most entertaining mascot in the league, saw Traktor’s Polar Bear take the prize. This year’s competition saw each of the league’s mascots partnered with a popular TikToker to shoot a short clip. The most popular clip won the prize. Traktor had 1.1 million views and 33,100 likes, plus eight votes from a jury drawn from the bloggers involved in the contest. Traktor’s mascot had more views than any other, but didn’t collect most likes: that honor went to Barsik from Barys Nur-Sultan, who had 38,500 thumbs up from happy viewers.

The Junior Hockey League playoffs started last week – and Igor Chernyshov was quick to make an impact. The 16-year-old Dynamo Moscow prospect began with four goals in his team’s 6-1 victory over Dynamo St. Petersburg. That makes Chernyshov, who turned 16 on Nov. 30, the youngest player ever to score four in a game in this league – a record that not even Matvei Michkov can match. Michkov, meanwhile, is also making an impression as SKA-Neva opens a 2-0 lead in its series against Krylya Sovietov. He scored twice in game two as SKA came from behind to win 5-3. In the regular season, Bogdan Senotov, 19, of Mamonty Ugry, topped the scoring charts with 79 (40+39) points in 62 games. That helped his team to third in the East, but he is yet to score in the playoffs, where Mamonty trail 0-2 to Omskiye Yastreby.