Tuesday’s Moscow derby had everything — a battle for top spot in the Western Conference, a struggle for local bragging rights and a spectacular fightback as Dynamo defeated CSKA thanks to a late flourish. Elsewhere, Traktor closed on table-topping Metallurg with a 4-2 win in Sochi while Vityaz overcame Severstal in overtime.

Dynamo jumped to the top of the Western Conference in thrilling fashion, scoring three goals in the last 10 minutes to overturn a 1-3 deficit and claim a derby win at CSKA. The two Moscow rivals share two wins apiece this season, but this proved by far the most dramatic of their encounters so far. Dynamo fell behind in the 27th minute and did not hold a lead in the game until 57:27 of an enthralling clash.

The first period was evenly matched and finished goalless, despite CSKA enjoying a two-man advantage in the middle of the session. Dynamo dug deep to survive that challenge, and managed to deny the Army Men a shot on goal until the visitor was back to four men.

Early in the second period, the Blue-and-Whites got their first power play of the game and produced rather more danger. Artyom Fyodorov came closest to opening the scoring when his shot hit the inside of the post and flashed across the face of the net to safety. CSKA survived, and then went in front during a passage of 4-on-4 play. Klas Dahlbeck led a two-man rush and, rather than looking for his partner, put a wrist shot beyond Ivan Bocharov in the visitor’s net.

Just after the midway point, though, Matvei Guskov’s evening was abruptly ended after he hooked Andrei Sergeyev between the legs. The major penalty helped Oscar Lindberg to tie the game quickly, redirecting a Slava Voynov shot past Adam Reideborn. However, Dynamo could not build on that success and, shortly after returning to full strength, the Army Men struck again as Mikhail Grigorenko restored the home lead. 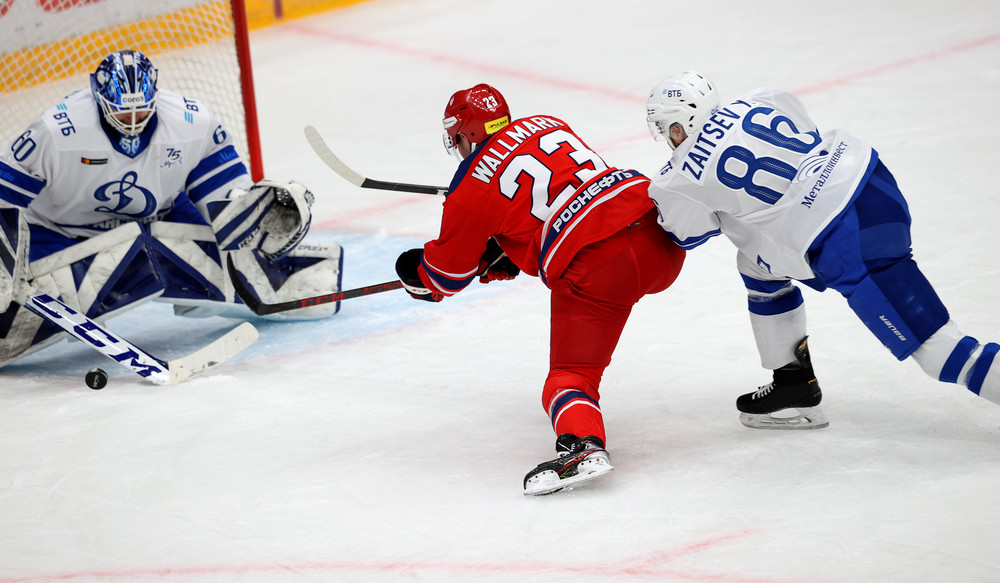 Midway through the third period, CSKA added a third. Bocharov denied Grigorenko from close range but ran out of answers when the puck got to Maxim Sorkin for a shot that opened a two-goal lead. Dynamo needed a swift response and good a huge boost when Vladislav Kamenev sat for holding. The power play was quickly converted: Vadim Shipachyov fed Stanislav Galiyev and his one-timer took a deflection off Darren Dietz’ pad and got past Reideborn.

A couple of minutes later, another CKSA penalty presented Dynamo with the chance to tie the game. Shipachyov and Galiyev combined again and this time Lindberg was on the spot to convert Galiyev’s feed to the back door and tie the scores with four minutes on the clock. The Swedish forward then went close to a game-winning hat-trick, twice testing his compatriot in the CSKA net but finding only the goalie’s pads.

And there was more drama to come when Andrei Pedan grabbed a late game-winner for Dynamo. The defenseman sent a low point shot skidding through a crowd of players and past his former Ak Bars team-mate Reideborn to give the visitor the lead for the first time just two-and-a-half minutes from the hooter.

CSKA tried to save the game amid a flurry of late penalties that left the teams playing four-on-four. However, when Bocharov got behind Bogdan Kiselevich’s last-gasp one-timer, the home team’s hopes were gone and Dynamo was headed to the top of the West.

Traktor closed to within a point of league leader Metallurg thanks to victory on the road at Sochi. Teemu Pulkkinen had a goal and two helpers as his team recorded a third successive victory.

Sochi made a great start to the game, opening the scoring in the first minute thanks to Nikita Tochitsky. He was assisted by recent signing Dmitry Zavgorodny. However, the home team was unable to consolidate that bright start, with David Rundblad taking a penalty almost immediately and giving Traktor the initiative. Kirill Kapustin tied the scores in the seventh minute, then late in the frame more penalty trouble saw the visitor grab two power play goals. Teemu Pulkkinen got the first, then assisted as Tomas Hyka made it 3-1 while Sochi had two players in the box.

Traktor continued to enjoy the better of the play in the second period but could not add to its lead. Instead, late in the frame, Vasily Glotov reduced the arrears with another power play goal. The visitor then had to kill another penalty before the second intermission.

Hopes of a home fightback were never realized, though. Traktor continued to create more scoring chances and midway through the third period Andrei Stas made it 4-2 and put the game beyond Sochi’s reach.

After snapping its recent five-game losing streak, Severstal was looking to resume its battle for a place in the top four when struggling Vityaz came to town. Tuesday’s opposition is second from the bottom of the Western Conference and faces an uphill battle to get into playoff contention despite some improved results of late.

However, it was the visitor that had the better of the first period with two unanswered goals from Stepan Starkov. The 22-year-old arrived in Podolsk earlier this season, having struggled to force his way into SKA’s first team this term. Today he converted the first power play of the game midway through the opening frame, then added a second on the hooter to give Yury Babenko’s men an encouraging start to the game. 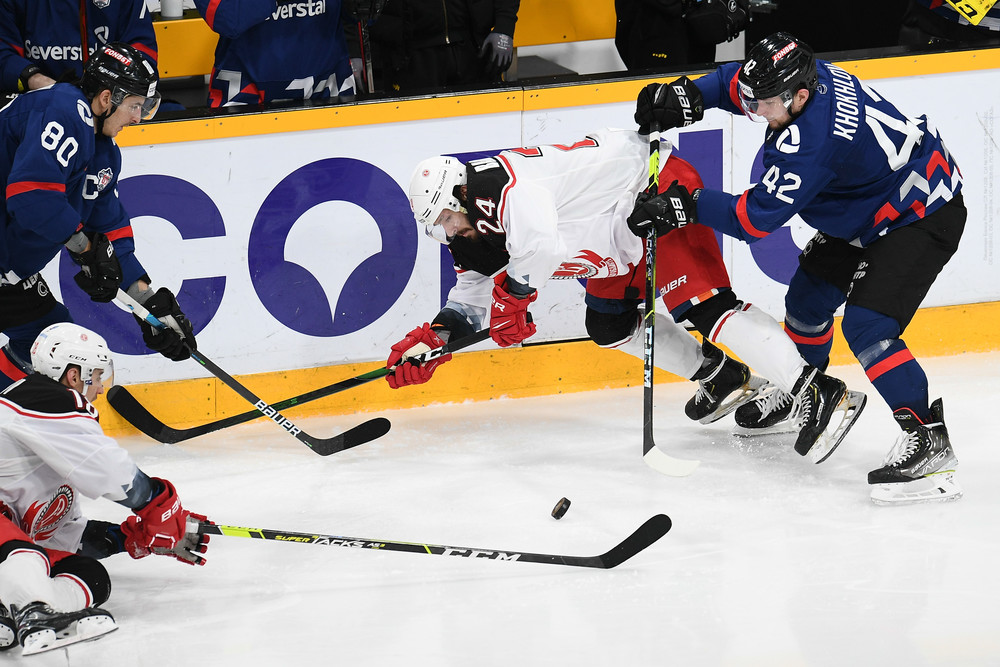 The home team responded by putting Dmitry Shugayev in goal for the second period, and after five minutes Kirill Pilipenko pulled a goal back for the Steelmen. But it wasn’t until late in the third that Joonas Nattinen tied the game and sent us into overtime.

During the extras, Vityaz attempted to repeat CSKA’s tactic of withdrawing the goalie and playing 4-on-3. This didn’t quite work out as planned, with Ilya Ezhov on and off the bench at regular intervals. However, even with the conventional three skaters, the visitor was able to grab the win thanks to Miro Aaltonen’s decider.