Another high-scoring day of KHL action saw Dynamo Moscow win the big game at Ak Bars when Dmitry Rashevsky snapped a 4-4 tie in overtime. Dinamo Minsk had the better of an 11-goal battle against Barys, while Salavat Yulaev hit Traktor for six to end another winning streak. Admiral shocked Lokomotiv with a 3-1 win in Yaroslavl, while Severstal and Neftekhimik both had home successes.

The visitor got off to a fast start, opening the scoring in the second minute thanks to Danil Bashkirov’s well-placed shot. And, having taken the initiative, Ufa did not relinquish it for a moment, dominating the game in all areas. When Grigory Panin added a marker to his early assist, the two-goal lead was no more than Salavat Yulaev deserved. 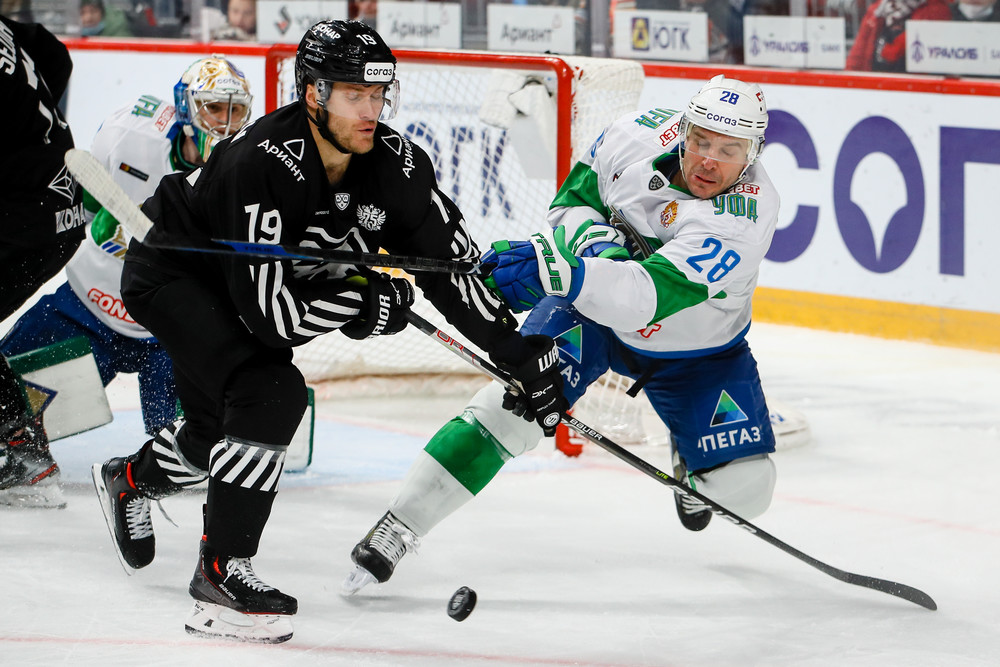 Early in the second it was 3-0 when Pavel Koledov got his first of the season. It wasn’t until midway through the game that Traktor began to show some signs of the kind of form that took it to the top of KHL standings, but even as the home team began to improve it was hit by a fourth goal when Panin set up Sakari Manninen. That took the veteran defenseman to three points in the game for the first time in his KHL career.

A power play goal from Teemu Pulkkinen offered a little consolation to Traktor in the third period but there was only one team that was going to win this game. And Salavat Yulaev wrapped up a convincing scoreline thanks to late goals from Nikolai Kulemin on the power play and Manninen’s second of the game.

Admiral pulled off the shock result of the day, defeating in-form Lokomotiv to end its four-game skid and halt the Railwaymen’s four-game winning streak.

The visitor came out with a clear strategy: restrict the space for Loko’s skilled forwards to do their work, squeeze the attacking edge out of the game and look to grab whatever opportunities the Sailors could fashion. And it worked.

The first period was a masterclass in shutting down the opposition. Admiral laid 19 hits on Lokomotiv, blocked seven shots and limited the home team to just seven efforts on goal. The visitor could generate no more chances, but grabbed the lead in the 20th minute when the Ushenin twins combined for Vyacheslav to open the scoring. 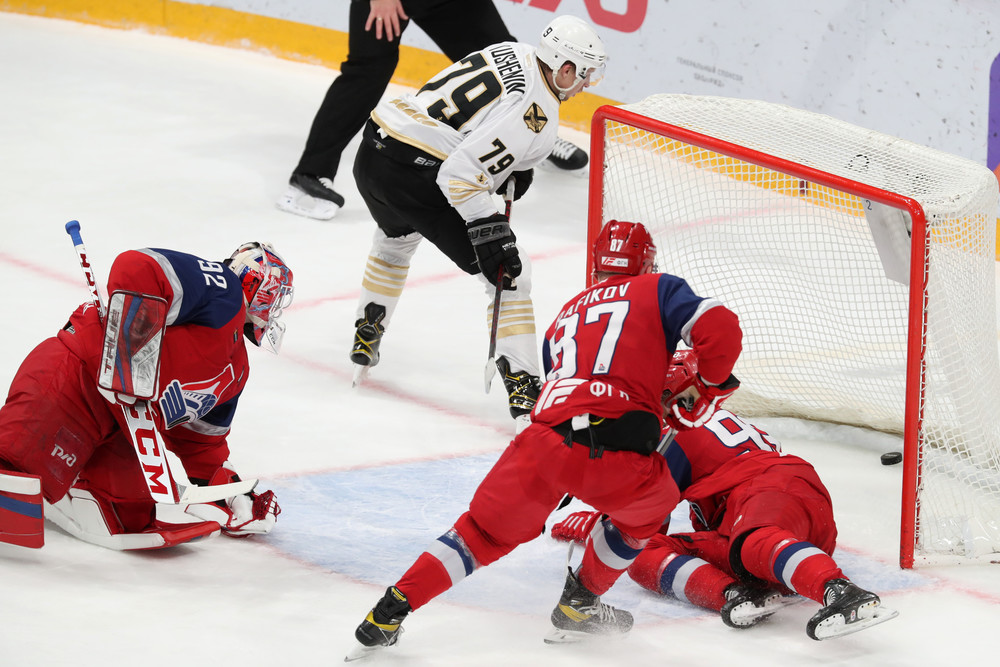 At the start of the second, things got even better for Admiral. A power play chance, the first of the game, saw Evgeny Grachyov redirect a shot beyond Daniil Isayev to make it 2-0. In response, Loko stepped it up. Now the home offense was firing, but the visitor had something to hold on to. There were chances: 17-year-old Alexander Perevalov bewitching rush almost produced a goal in only his second KHL game, Reid Boucher’s one-timer tested Nikita Serebryakov in the Admiral net. But it wasn’t until late in the middle frame that a power play goal from Pavel Kraskovsky put the home team on the scoreboard.

Not surprisingly, Lokomotiv looked to dominate the third period in search of a way back into the game. However, for all its puck possession, the home team rarely created great danger for Serebryakov & Co. The visiting defense got its angles right, blocked shots repeatedly and piled up the frustration for Loko before sealing the deal a minute from time when Alexander Shevchenko found the empty net.

Neftekhimik gets back on track

Two teams in need of a win met in Nizhnekamsk — and a close contest duly followed. After trading four goals in regulation, the teams were eventually separated in a shoot-out with Danila Popov giving the host the verdict.

Amur made a strong start to the game and had the better of the first period in all areas — except for putting the puck in the net. After the visitor dictated much of the play without scoring, it was hit by a sucker punch in the final minute of the frame when defenseman Mikhail Sidorov scored only his fifth goal in 208 KHL appearances.

The Tigers replied in the 29th minute when Vladimir Butuzov tied the scores, but Yegor Popov restored the home lead within a couple of minutes. Amur, though, was still having the better of the play and got its reward late in the second period when Alexander Gorshkov made it 2-2.

The third period was goalless, but the home team had more reasons to be cheerful after it managed to turn around the pattern of play and found itself outshooting and outhitting the opposition as the game moved into overtime.

There was little between the teams in the extras, but home goalie Alexander Sudnitsin came up big in the shoot-out, stopping all five attempts from Amur. Danila Popov found the net at the other end to give Neftekhimik the verdict.

Historically, Severstal has always had the edge over Kunlun Red Star on home ice — and today’s match-up continued that sequence. A 2-1 win ensured the Steelmen have taken victory in all six encounters between the clubs in Cherepovets.

Severstal had much the better of the first period, outshooting Red Star 13-3, but was unable to find a way past Jeremy Smith in the visitor’s net. The visitor improved in the second: Cory Kane’s early one-on-one break set the tone, Luke Lockhart had a good chance and Jason Fram finally broke the deadlock with a point shot that deceived home goalie Konstantin Shostak. Mikael Tam’s assist brought him his first point in the KHL.

However, the lead was short-lived. Kunlun ran into penalty trouble late in the session and, despite surviving 33 seconds of 3-on-5 PK, Smith was beaten by Daniil Vovchenko after regaining a fourth skater.

Early in the third, David Dumbadze put Severstal ahead for the first time in the game when he forced the puck home after a face-off win in the Red Star zone. Once ahead, the Andrei Razin’s team managed the game well to close out the win — and extend the Dragons’ losing run in Cherepovets to six games.

Rashevsky give Dynamo the OT verdict

Dynamo got a much-needed victory in an entertaining game in Kazan. The high goal tally was partly due to some dubious defensive decision-making, but this was a highly competitive clash between two of the league’s marquee teams, settled in overtime by one of its rising stars.

Dynamo’s recent form has been worrying. After a blistering start to the season, the Blue-and-Whites have looked tired in recent games and managed just one win in the last six. Today, Ak Bars looked to take advantage of any uncertainty early in the game, and jumped to a 2-0 lead inside five minutes. Dmitry Yudin, who got the game-winner last time out, launched a long pass down the boards for Nikita Dynyak to chase for the opener in the fourth minute and 50 seconds later Kirill Petrov fired past Ivan Bocharov after good work from Jordan Weal on the boards.

That was the end of Bocharov’s evening, with Alexander Yeryomenko coming into the game to replace him. But the goals kept coming, with Andrei Sergeyev getting Dynamo back in contention before Dmitry Voronkov quickly restored the two-goal lead. 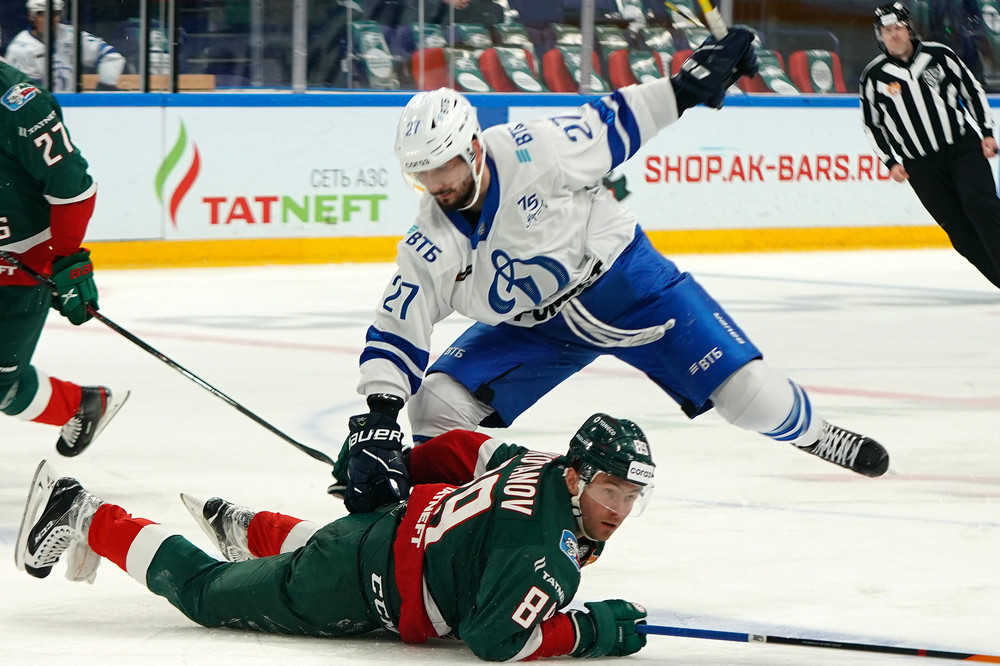 That advantage disappeared early in the second period, though. Home goalie Timur Bilyalov would surely like the second goal back after Ivan Muranov’s routine shot from mid-distance squirmed through his pads. But that error was minor compared with the blunder that presented Vadim Shipachyov with the equalizer: Artyom Galimov’s misplaced pass across his own zone put the puck right on the Dynamo captain’s stick, and the KHL’s leading scorer was not about to turn down that offer.

Dynamo got in front for the first time in the 34th minute thanks to a counter-attack goal from Andrei Mironov, but that lead was short-lived. A flurry of penalties put Ak Bars on the power play and Kirill Panyukov duly converted the chance.

After eight goals in 40 minutes, the teams calmed down in the third and there was no further scoring. However, Dynamo went on to win it in overtime thanks to rising star Dmitry Rashevsky. Ten days after his 21st birthday, the young forward potted his 13th goal of the season with an impressive solo effort to get the Muscovites back to winning ways.

Two goals in 11 seconds midway through the first period proved to be the game-breaker as Dinamo edged Barys in a thrilling battle in Minsk. Jakob Lilja grabbed a hat-trick for the visitor, and Darren Dietz scored twice, but their efforts were in vain as the Belarusians maintained their charge up the Western Conference rankings by turning the game around in the final stanza.

There was no shortage of action in this one as the teams traded 11 goals, and the scoring started early as Lilja put Barys in front after just 45 seconds. The Swede doubled that advantage on the power play in the eighth minute, but Dinamo hit back to tie the scores at the first intermission. Artyom Demkov reduced the deficit with a power play at the other end, then Minsk’s Swedish combo saw Mario Kempe and Malte Stromwall combine for Mattias Tedenby to tie it up a second before the hooter.

The second stanza brought more scoring: Darren Dietz found the net twice for Barys, while Tedenby potted his second of the game for Dinamo. Barys led at the second intermission, and had yet to trail in the game.

Dinamo, though, served notice of its intent early in the third when Ilya Usov tied it up at four. Then it all went goal crazy midway through the final frame. First, Kempe converted a power play when he shovelled home the rebound from Taylor Beck’s shot. That was 51:02, and the home team held the lead for the first time in the game. On the next shift, Dinamo poured forward once again and a Tyler Graovac shot produced a spot of pinball in the crease before the puck skittled into the net off Shevchenko’s skate. Visiting goalie Joni Ortio was sent to the bench by an angry Nikita Mikhailis and, after a video review established that the goal was legitimate, Barys set about salvaging matters.

Within 20 seconds, the visitor had a lifeline. Lilja completed his hat-trick to keep the game alive, but Dinamo had enough to close out the remaining minutes and secure a ninth win in 10 games.