Dynamo Moscow and Salavat Yulaev successfully extended their winning starts to the season. Dynamo win 5-4 at Sibir to record its best-ever opening to a KHL season, while Salavat also recorded a sixth successive win, defeating Red Star 5-1. The Moscow derby saw Spartak recover from 0-3 only to lose to a late CSKA goal. SKA got a shut-out win at Sochi, and Traktor defeated Neftekhimik 3-1.

Dynamo continued its unbeaten start to the season — but almost allowed Sibir to recover from 0-5 in an unpredictable affair in Novosibirsk.

The home team had a great chance early in the game when it got a 5-on-3 power play. Unfortunately, Sibir has the worst conversion rate in the league when playing with a man advantage and was unable to capitalize here. Instead, Dynamo took the lead against the run of play when Stanislav Galiyev opened the scoring in the last minute of the opening frame.

The second period saw the visitor take control. The first shift after the restart saw Slava Voynov double the lead, with Vadim Shipachyov’s assist extending his productive streak to six games. Five minutes later, Nikolai Chebykin scored his fifth goal in three games, then late in the frame a 5-on-3 advantage for the Muscovites led to a second goal for Galiyev and another helper for Shipachyov. 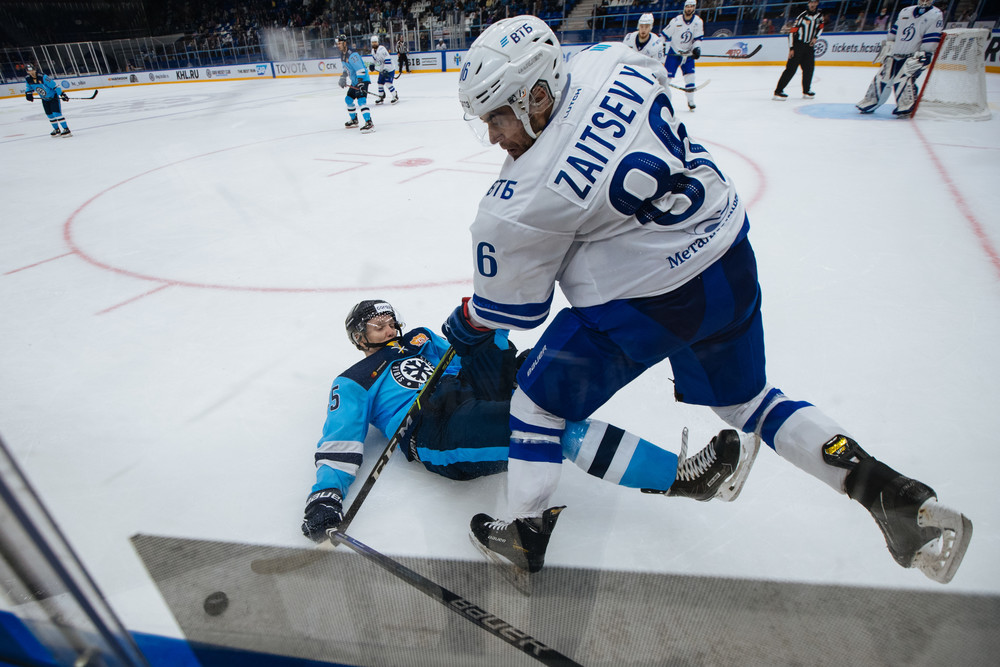 At this point, Dynamo looked well on the way to securing a sixth successive victory and recording its best ever start to a KHL campaign. That impression was reinforced when Oleg Zaitsev made it 5-0 at the start of the third.

Sibir, though, despite struggling for form this season, suddenly found its game. Ilya Morozov pulled a goal back, then a rush of three goals in six minutes late in the game had Dynamo looking nervously at the clock. Alexander Sharov marked his return to the team with a goal, Nikita Setdikov and Denis Bodrov also scored, and Viktor Komarov collected his 100th career point. It all added up to 78 seconds for Sibir to try to save the game; Dynamo held on — just — to take the win.

Shmelyov stars as Salavat makes it six in a row

Five goals for Salavat Yulaev — and not a single point for Ufa’s Finnish troika. As Tomi Lamsa celebrated his birthday with a sixth straight win this season, his team showed why it might be a more powerful contender this time around.

Last year, an over-reliance on Teemu Hartikainen’s line made Salavat easy to stop in the playoffs. This year, though, other players are stepping up to lead the scoring. Today, it was Sergei Shmelyov’s turn to dominate with a three-point performance in another convincing win for the men in green. Whether it was stealing the puck in center ice to set up Nikolai Kulemin’s goal, playing a spot of tic-tac-toe with Alexander Kadeikin as Pyotr Khokhryakov scored, or firing home a well-deserved goal of his own, the summer signing from HC Sochi was at the heart of many of the good things in Ufa’s play.

And he wasn’t alone: young Alexei Pustozyorov opened the scoring when he pounced on a loose clearance in the 15th minute and Vladislav Kartayev also found the net.

The only disappointment for Ufa was failing to secure a shut-out. Kunlun was seriously overmatched here, but the Dragons produced a good goal of their own when Zach Yuen’s no-look feed enabled Tyler Wong to flash home a one-timer early in the third. However, that was never likely to affect the final outcome as Salavat Yulaev continues its best-ever start to a KHL season.

An absorbing Moscow derby saw Spartak battle back from 0-3, only to miss out to a late Sergei Andronov goal for CSKA. Sergei Plotnikov finished the game with a hat-trick for the visitor, while Ilya Talaluyev’s first appearance of the season brought him two goals for the Red-and-Whites.

The Army Men left plenty of experience out of the roster for Thursday’s game. In goal, Ivan Fedotov was again preferred to Adam Reideborn, with the Swede apparently struggling to secure his status as #1 at the Army Men. In addition, Mikhail Grigorenko, Pavel Karnaukhov and Bogdan Kiselevich were all absent from the team.

The first period was a hard-fought but unspectacular affair with little in the way of goalmouth action. Spartak had marginally the better of play, but neither goaltender was seriously troubled. That all changed at the start of the second when the visitor took the lead. John Gilmour took the puck out of defense and his surge down the left-hand channel pulled Spartak out of position. Gilmour’s pass to the slot found Konstantin Okulov, whose shot was saved, and the rebound fell for Sergei Plotnikov to shoot home.

Then, midway through the stanza, came a quickfire double to take the game away from Spartak. Gilmour was involved again in CSKA’s second, but this was all about a devastating one-timer from Lucas Wallmark on the left-hand dot. Barely a minute later, and from a similar position, Plotnikov rifled home his second of the game and CSKA led 3-0. 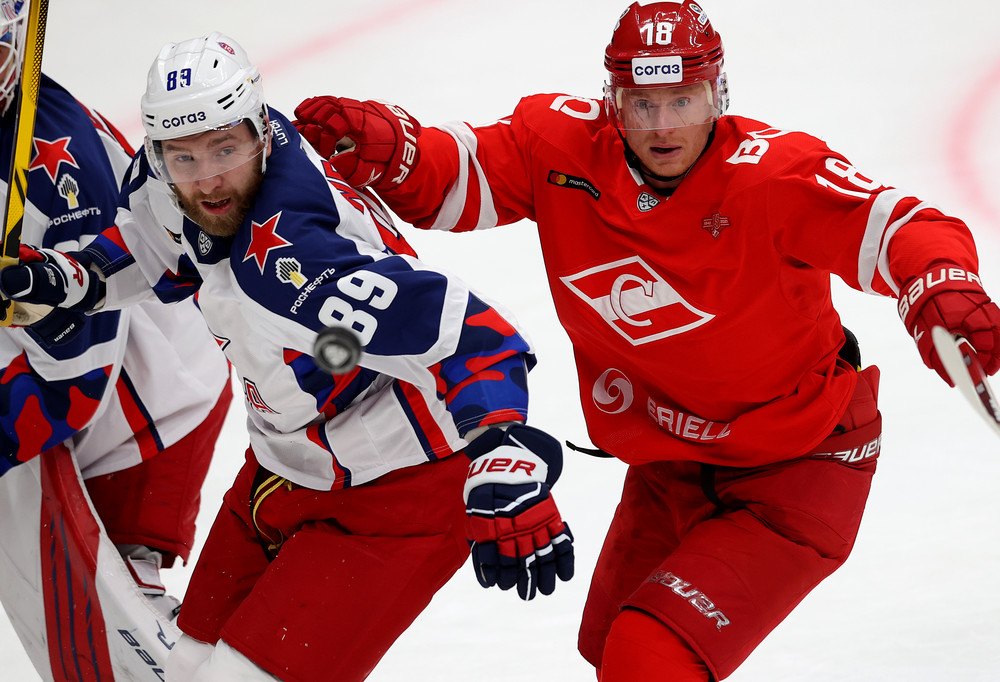 Spartak needed an immediate response and got it thanks to Ilya Talaluyev’s solo effort. He won the puck in center ice, raced down the wing, deked a defenseman to the floor and beat Fedotov to reignite the contest. And it was Talaluyev again early in the third whose power play tally made this a one-goal game when he lazered a shot through a crowded slot and into the top corner. Not a bad return for a first appearance of the season.

Spartak’s power play got another chance soon afterward and although Klas Dahlbeck made it back to the ice safely, the teams were at equal strength for just 15 seconds before Alexander Khokhlachyov tied it at 3-3. Dmitry Kugryshev dinged a shot off the crossbar but managed to retrieve the loose puck and set up his team-mate for the tying goal midway through the frame.

But home celebrations were cut short in the 54th minute when CSKA regained the lead. A point shot was redirected by Matvei Guskov on the slot and Oscar Dansk could not gather the puck cleanly. Andronov was the first to react and the captain lifted the puck into the net for the winning goal. Plotnikov scored into an empty net to wrap up the victory and complete his hat-trick.

Two goals from Joonas Kemppainen secured a win for SKA beside the Black Sea. Sochi slipped to its fifth successive loss and failed to score for the first time this season as Lars Johansson posted his second shut-out of the campaign.

SKA controlled much of the play in the opening two periods. Sochi battled hard to get a share of puck possession and keep the visiting offense at arm’s length, but the Army Men continually applied pressure on their former team-mate Magnus Hellberg in the Sochi net.

The breakthrough came late in the second period when SKA set up camp on the power play. The visitor patiently probed the Leopards’ PK and found a weakness. The puck went back to Daniil Pylenkov and his shot was redirected into the net by Joonas Kemppainen.

The Finn got his second of the game early in the final frame. Andrei Kuzmenko created the chance with his work behind the net and Kemppainen fired home his pass to make it 2-0.

Traktor posted a fourth successive victory as its bright start to the season continued, but allowing two early goals sent Neftekhimik spinning to a third straight loss. The early optimism in Nizhnekamsk is already starting fade as Oleg Leontyev’s team struggles to build on victories in its opening three games.

Traktor got ahead in the third minute when Andrei Stas stuffed home the puck from close range. The Neftekhimik bench challenged the play, believing that the puck had gone out of the playing area before getting to the net, but the video review upheld the on-ice decision. The home team then had a penalty to kill, successfully, only to blow up again on its first power play of the game. A breakdown in the Traktor zone enabled Lawrence Pilut to bring the puck away and he set up Yegor Fateyev for a short-handed goal.

Neftekhimik had slightly the better of a goalless second period but fell further behind when Sergei Kalinin struck on the power play early in the third. The home team got on the scoreboard at last midway through the final frame thanks to Vladislav Shutov, but there was no way back.