Vadim Shipachyov produced the individual performance of the day with four points as Dynamo beat Avangard 5-2. CSKA grabbed an overtime victory in its showdown at Ak Bars, but SKA suffered its first defeat when it went down 2-4 at home to Avtomobilist. Elsewhere, Barys and Severstal both got their first victories of 2021-2022.

Shipachyov at the double again

Vadim Shipachyov began this season in blazing form and today he notched his fifth and sixth goals of the campaign. The Dynamo captain has scored twice in each of his three appearances to date, and today he added a couple of helpers for a four-point haul in an eyebrow-raising scoreline against defending champion Avangard.

This Shipachyov show got started in earnest late in the third period. Dynamo got its first power play of the game and the team’s attacking fulcrum needed just 30 seconds to get the puck in the net. Then, after Arseny Gritsyuk tied it up early in the second, Shipachyov restored his team’s advantage with his second of the night. That moved him to six goals and no assists, an unusual return for a player who tends to collect more helpers than goals. So Vadim began to set that record straight, firing in a shot that Alexander Petunin redirected past Simon Hrubec. 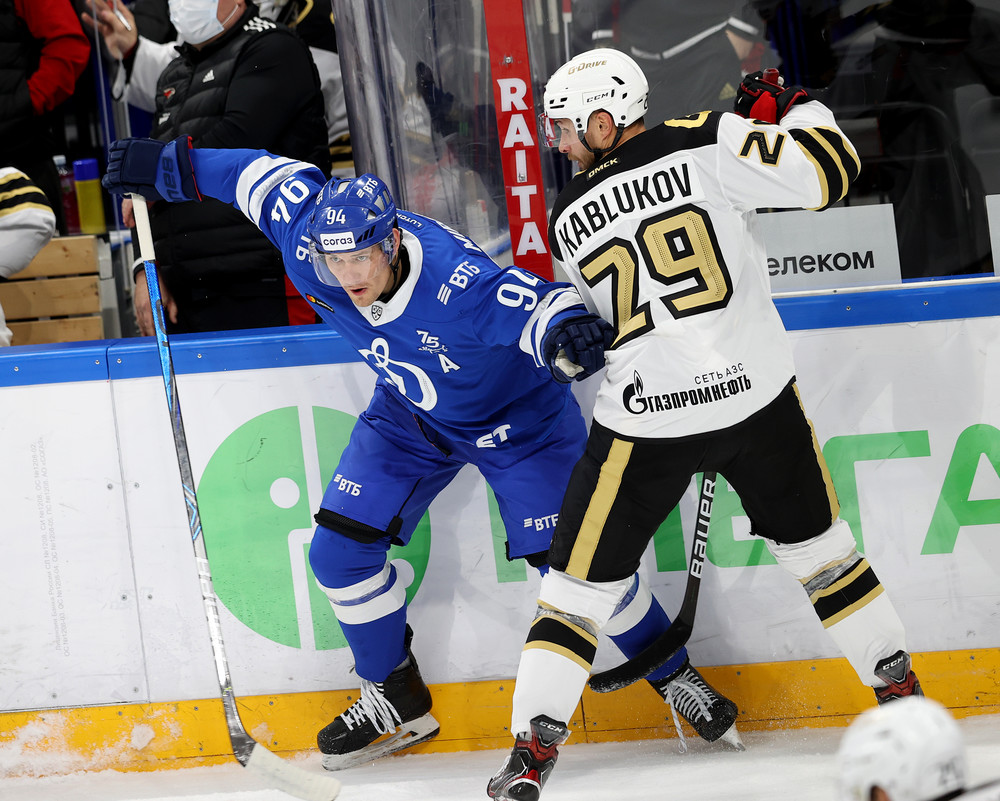 Avangard did not give up, and made it a one-goal game going into the third. Sergei Tolchinsky’s power play goal seconds before the hooter changed the atmosphere in both locker rooms, and possibly prompted some hasty rewrites of the head coaches’ comments.

However, it wasn’t going to dislodge Dynamo. In a battling third period, the home team cemented its advantage in the 55th minute when Yegor Zaitsev scored. For once, Shipachyov was not involved, but he finished his performance with an assist on the fifth and final goal as young Dmitry Rashevsky got his second of the season. Avangard suffered its first loss of the campaign.

The big game of the day saw the two teams that topped their Conferences last season going head-to-head in Kazan. However, neither Ak Bars nor CSKA have been entirely convincing this time around. The home team was beaten in its previous two games, falling to Kunlun Red Star and Torpedo on home ice. The Army Men, meanwhile, suffered a heavy defeat in the Opening Cup against Avangard before edging an unimpressive 3-2 verdict against Dinamo Riga and finally hitting its stride with a 4-1 success in Sochi.

Ak Bars opted to return to the line-up that began the season with a comfortable win over Jokerit. That meant Daniil Tarasov back on the first line and Alexander Burmistrov returning to the fourth. Rinat Valiyev and Mark Yanchevsky paid the price for some lackluster defense and were scratched. CSKA, meanwhile, left out Mikhail Grigorenko and gave Joakim Nordstrom a game.

The game began at a frantic pace, but unfortunately this generated rather more heat than light. There was no scoring at the first intermission, and few clear chances at either end. However, after surviving an early scare in the second, Ak Bars began to get a grip on proceedings. Tarasov, at fault for that early CSKA chance, redeemed himself in the build-up to the opening goal as he took two defensemen out of the play and created the space for Artyom Galimov to set up Dmitry Kagarlitsky. The lead might have been greater; twice, Ivan Fedotov managed to get a pad behind the puck right on the goal line. 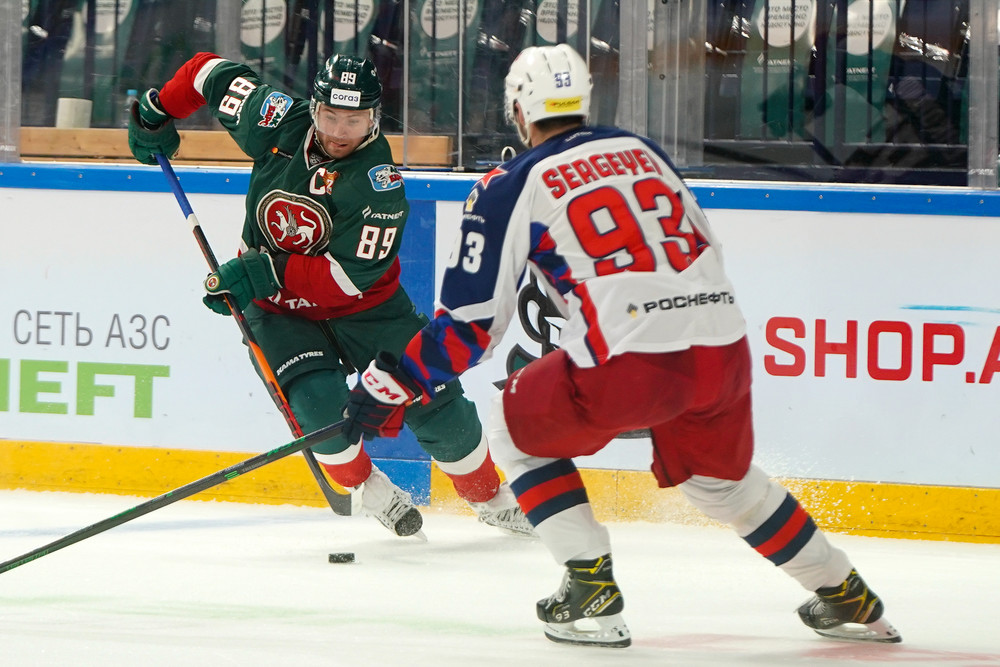 That ensured that the Army Men were still in with a chance in the third and, eventually, the opportunity fell for them. In the 54th minute, a counter attack set up 20-year-old Matvei Guskov for his first goal in the KHL.

Dmitry Voronkov might have won it for Ak Bars in the last minute, then at the start of overtime he earned his team a penalty shot. However, Fedotov snuffed out the one-on-one break in regulation and denied Jordan Weal in the extras. At the other end, Klas Dahlbeck popped up on 64:33 with the game-winner; Nordstrom’s assist was his first point for his new club.

SKA had three wins from three, and a 9-2 win in its home opener. Avtomobilist was winless from two, and allowed 10 goals in its pair of home games to date. So today’s meeting in Petersburg looked like a home banker.

However, there’s little predictable about the KHL this season and Avtomobilist turned the form book upside down to withstand an offensive fusillade from the Army Men and claim a 4-2 win.

Much of the visitor’s success was down to Dmitry Shikin, who stopped 32 shots. That was part of a colossal defensive effort — 21 shots blocked as SKA mounted more than 70 assaults on the Avto net but managed just two markers.

At the other end, Avtomobilist had to rely on breakaway chances for the most part. But opportunism and clinical finishing was sufficient to grab the win. The opener was a case in point. The Motormen were on the penalty kill when Alexander Samonov skated out of his net to field the puck. Quick as a flash, Alexei Makeyev pounced, taking it off the goalie’s stick and slotting home. The next goal, though, was an even more alarming error: Kirill Marchenko fired in a fine shot to beat the goalie, but unfortunately was shooting at his own net. Brooks Macek was credited with the effort, but the German international might be a bit sheepish about adding it to his stats.

Early in the second period, Avtomobilist extended its lead when Linden Vey was flattened at one end of the ice and a breakaway enabled Stephane Da Costa to make it 3-0. Only after that, midway through the game, did we see SKA get on the scoreboard. Fredrik Handemark struck on the power play — his first of the season, his team’s first of the night — and early in the third Anton Burdasov made it a one-goal game. By now, though, the visitor understood what was needed: stay calm, wait for your chance, and grab it when it comes by. A counter-attacking goal from Ryan Spooner was the reward, a 4-2 verdict was the outcome.

Barys gets off the mark

Barys got its first win of the season after a fast start here sent Amur spinning to a fourth successive loss. The Kazakh team suffered a rough opening to its campaign, scoring just twice as it lost at home to Salavat Yulaev and Metallurg in the first week of action.

Today, though, Nikita Mikhailis saw his team improve on that shot-shy run. Two goals in the first five minutes gave everyone a lift and laid the foundation for a much-needed victory. Jacob Berglund made his debut for his new club, combining effectively on the third line with Kirill Savitsky and Arkady Shestakov, but it was the second line that broke the deadlock just 64 seconds into the game. Nikita Mikhailis set up Curtis Valk for his first of the season, and that inspired the home team to pile even more pressure onto the Tigers. A second marker soon followed, with Alikhan Asetov opening his account for the new campaign.

The first period advantage for the home team was huge — 17-1 on shots — but it wasn’t until early in the second that Barys struck again. This time, it was a short-handed goal when Shestakov and Savitsky set off on an odd man rush while Matt Frattin sat in the box.

Amur managed a response on the same power play, though, with Gleb Zyryanov reducing the arrears. The same player made it 2-3, but that goal came in the final minute and there was no time for Amur to salvage the game.

When Severstal hosted Admiral, something had to give. Neither team had a victory to its name this season. Severstal suffered a narrow home loss to SKA before going down 1-4 against Dinamo Minsk; Admiral picked up a point from a shoot-out loss at Avangard, but endured heavy defeats against Spartak (1-4) and SKA (2-9). In the event, it was the home team that got its first success of the campaign, but Admiral could at least take consolation in collecting a second point after taking the game to overtime.

The visitor was keen to put Monday’s heavy loss behind it and made a bright start. Rihards Bukarts opened the scoring inside three minutes to give Admiral the lead. However, the Sailors soon encountered penalty trouble and ultimately that cost them. Severstal’s third power play of the game saw Igor Geraskin tie the game in the 16th minute.

Early in the second period, Yegor Morozov had a great chance to put the home side in front when Kamil Fazylzyanov was called for hooking and a penalty shot was awarded. However, visiting goalie Nikita Serebryakov won that duel to keep the game locked at 1-1. Soon after that, Severstal was reduced to three skaters but managed to keep the Admiral power play at bay. Ironically, then, the visitor went in front with a short-handed goal as Mark Verba opened his account for the club while Fazylzyanov sat for holding.

But penalties cost Admiral again in the third as Morozov found the net on the power play. That goal took us to overtime before Vladislav Kodola potted the winner for the host eight seconds before the hooter.