Man of the Week — Magnus Hellberg

KHL.ru’s weekly column ’Man of the Week’ returns with SKA’s secret weapon in these playoffs. The towering netminder started the postseason on the bench, but after Alexander Samonov allowed four goals to Dynamo Moscow in game-1 of the West semifinals, Hellberg started playing and became the undisputable starter for St. Petersburg. However, the Conference finals will be different as SKA will face CSKA for the fifth time in seven years.

The Swedish goaltender, standing at 6-foot-6, is at his fourth season in the KHL, having first signed in the league with the Kunlun Red Star in 2017. This year, Magnus Hellberg played a career-low of only 21 games in the regular season, still posting excellent numbers. The SKA’s coaches wanted to give more chances to the system’s rising star Yaroslav Askarov, and Alexander Samonov was in excellent shape for a couple of stints earlier in the campaign. However, things changed in the postseason. After a relatively easy 4-1 win in the first round against Dinamo Minsk, with Hellberg getting the start in the final game-5, SKA had to face Dynamo Moscow. The Blue-and-Whites, first of all, presented themselves as a team with a potent offense, with the regular-season top scorers in the first line, Vadim Shipachyov and Dmitrij Jaskin. In game-1, Dynamo managed to confirm this impression, scoring four goals on Samonov and getting a first yet important win in St. Petersburg. The SKA’s coaches had no other choice than to give Hellberg the starting goalie position for the second game. And it paid off. Hellberg stopped 24 shots and posted his first shutout in the 2020-2021 postseason, with SKA defeating Dynamo in a close battle decided by Kirill Marchenko with less than three minutes to go in the third period. The series went on with another three unanswered wins by SKA, with Hellberg accumulating saves, and another shutout in game-5. Currently, the towering netminder is third in the goals-against average standings with 1.16 and fifth in saves percentage, with 95.3%. Strong numbers that show Hellberg’s clutchness and consistency in the most critical moment of the season.

Magnus Hellberg was born in Uppsala, the fourth-largest city in Sweden, and seat of the Almtuna IS local team, where Hellberg started playing. However, like many other young and perspective players, Hellberg later moved to Frolunda, where he had his debut in the then-called Elitserien in the 2011-2012 campaign. One year earlier, Hellberg was drafted in the NHL by the Nashville Predators and was the first goalie called during the selections.

After playing 17 games with Frolunda, Hellberg crossed the Atlantic in 2012, signing an entry-level contract with the Predators. He then consequently played 39 games in the AHL with the Preds affiliates, the Milwaukee Admirals, being awarded goaltender of the month and the week and completing an up-and-coming first season overseas. In the next year, Hellberg had his debut with the big boys, but he didn’t manage to conquer a full-time spot as an NHL goalie and on July 1, 2015, he was traded to the New York Rangers. However, with the Rangers, Hellberg’s career followed a similar path: excellent play in the AHL, but few chances in the NHL. Once his deal with the Rangers ended, he opted to leave North America, signing to be a starting goalie for the Chinese KHL franchise Kunlun Red Star, at its second year in the league.

Hellberg’s career in the KHL started on a positive note. Despite registering just 16 wins in his 51 games for the Dragons, Hellberg was a standout for the underperforming Kunlun Red Star, posting a 92.6% save percentage. He signed a one-year extension with the Chinese franchise during the season, but he was then traded to the perennial contending club SKA St. Petersburg in the offseason for financial compensation. Once in St. Petersburg, Hellber’s role changed. He wasn’t the star of the team anymore but was called to help SKA’s young star Igor Shestyorkin growing up and developing. Once Shestyorkin left St. Petersburg and moved to the NHL, Hellberg was once again called to a similar role with Yaroslav Askarov and Alexander Samonov, leading to his only 21 games played in the 2020-2021 campaign. However, the playoffs are different, and seeing Hellberg starting for SKA is no surprise. With the West finals upcoming, the towering called is expected to start between the piping for the Neva’s Armymen. An exciting duel of Swedish goalies is ahead of us, with CSKA starting his fellow countryman Lars Johansson. 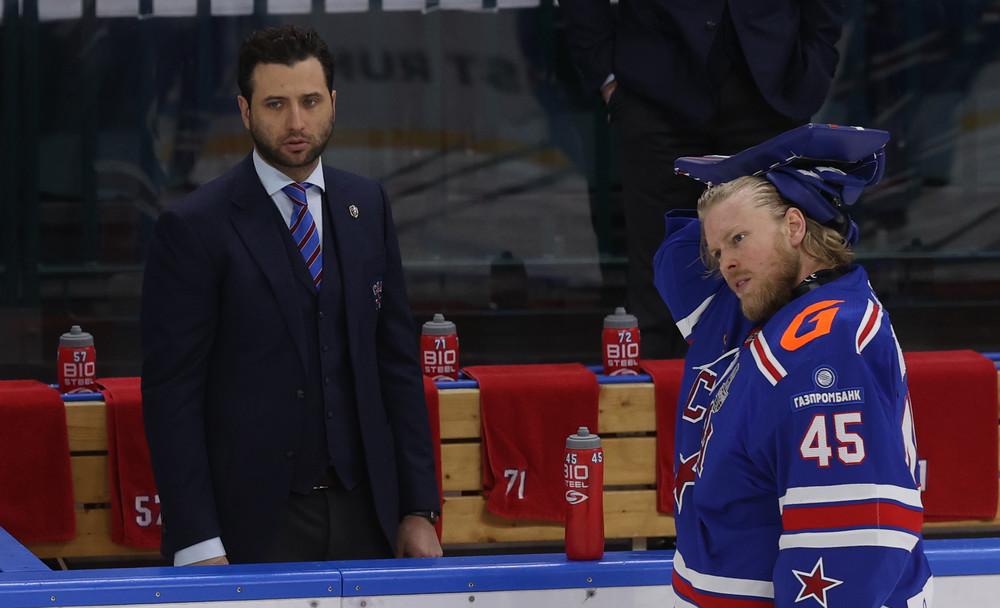