KHL.ru’s weekly column goes on with Avtomobilist’s Peter Holland. In his second season in the KHL, the Canadian forward has played a crucial role in the recent Ural franchise’s winning streak. He netted his second double on Friday when Avtomobilist downed Dinamo Minsk, then posting a three-point performance on Sunday in Avto’s downing of Avangard.

The Canadian forward has just been awarded Best forward honors last week, when he scored 7 (4+3) points in four games, helping the Motormen attaining four consecutive Ws. Long winning streaks are not a novelty in Yekaterinburg; however, this year, they also had plenty of defeats in November and December, when they slumped to ten defeats in a row before finally defeating Metallurg in Magnitogorsk on Dec. 13 with a sound 4-0 away win. Holland didn’t score for six straight games across that span and was held goalless for more than a month. The season for Avtomobilist seems to be similar to the last one, from one hand.

“Every team seems to have ups and downs, and it seems like when our team is down, it takes us a little bit longer than other teams to come out of it,” Holland admitted during an interview with KHL.ru. “And so, as you start to lose a couple of games, it just starts to snowball. But now I don’t know why it’s similar to last year.”

But this is just a part of the Canadian forward’s season. The Ontario native has been on fire lately, especially so in the latest two games. On Sunday, the 30-years-old forward hit the 30-point mark, and he has the chance to score more than 40 points twice in a row after getting 43 (17+26) last year. He’s currently the third scorer for the Ural franchise, trailing only Alexei Makeyev and Pavel Datsyuk.

“I think I’ve been playing pretty, good hockey all year long, just sometimes the puck goes on the and sometimes it doesn’t,” he said. “I’ve had three goals called back on me this year. Different things happened throughout the games, or by bad luck, I’ve had crossbars posts. if those things go in, then it’s not as big of a change, but still. It’s also nice having my wife here finally. For the first five months of being on your own with covid and everything like that, it’s just a lot mentally. And so to have her here now is obviously nice.”

With the recent winning streak, Avtomobilist climbed to fifth place in the Eastern Conference finals. At the start of the season, the Motormen even led the Kharlamov Division, but after sitting for a while just ahead of the playoffs line, they are now a strong candidate to face Metallurg in what promises to be a red hot first-round clash.

Peter Holland was born in Ontario on Jan. 14, 1991. He started playing hockey in the local junior leagues, then had his first showing on the big scene with the Guelph Storm of the OHL. The first turning point of his career happened in the 2008-2009 season. In an eventful year, Holland made it to the OHL All-Star Game, skated at the annual Canada — Russia Challenge, and skated for Team Canada at the 2009 IIHF U18 WJC in the USA. After his successful 67-point campaign, he was drafted by the Anaheim Ducks with the 15th overall pick. Holland played two further seasons with the Storm, cementing his position as one of the hottest prospects in the league and the Ducks’ pipeline for the future.

In 2011, Holland got his feet wet in the AHL, playing three games in the league, scoring a promising 6 (3+3) points. However, the forward didn’t manage to keep the pace for the California franchise. Despite the excellent start, he mostly played for the Ducks’ AHL affiliate, first the Syracuse Crunch, then the Norfolk Admirals. Holland potted his first goal in the NHL in Nov. 2011 against Roberto Luongo’s Vancouver Canucks, but he never made the Ducks’ roster on a regular basis.

In 2014, Holland returned home as he was traded to the Toronto Maple Leafs, where he played most of his games in the National Hockey League. However, in 2016-2017 he changed team again, being traded to the Arizona Coyotes. Holland also signed contracts with the Montreal Canadiens and the New York Rangers, then was ultimately moved to the Chicago Blackhawks, appearing in 266 NHL games, producing 85 (36+49) points. As an impending unrestricted free agent, Holland decided to pursue a career overseas.

On May 22, 2019, Holland signed a two-year deal with Avtomobilist Yekaterinburg. In 2019, the Motormen had several high-profile signings as the team tried to enter into the league’s elite. While roster-wise it the move succeeded, it can’t be said that the franchise achieved the desired results. However, Holland had a fantastic start of his KHL career, tallying a goal in his debut game when the Motormen defeated Severstal on Sep. 02, 2019. A couple of months later, Holland potted his first double when Avtomobilist got the best of Dinamo Riga with a hard-fought, 5-4 win. The Ontario native had a convincing showing in his first KHL season, producing 43 points for the Motormen, who, however, suffered from a first-round exit in the cut-short 2019-2020 season despite winning their first eight games in the season.

Avtomobilist started the 2020-2021 campaign with the hope of improving their overall performance and signed a few other high-caliber players, both Russian and international. Moreover, Bill Peters was hired as the team’s new head coach. The bench boss was famed in Russia as he coached Team Canada to a gold medal at the 2016 IIHF World Championship in Moscow and St. Petersburg. The hiring was a positive one in Holland’s opinion.

“We’re definitely more of a system that our team plays, it’s not so much just go out there and do whatever you want,” he explained. “There’s definitely more structure to our game, and he demands that we play his style. And I think at the beginning of the season, it was an adjustment. Now that we’re playing better hockey as a result of just understanding the system and the structure, and it’s more second nature now doing it.”

Avtomobilist’s new season started similarly to the old one, with seven victories in the campaign’s first ten games. However, soon difficult times hit the Ural franchise, which had a horrid 10-game losing streak between November and December. Rumors were running wild about a possible firing of Peters, but the Canadian bench boss managed to keep the team together, and now the Motormen have four Ws in a row, mostly thanks to Holland’s production and a couple of excellent performances by All-Star goalie Jakub Kovar. Now, the Yekaterinburg side is in full swing and currently the fifth seed in the East. Will Peters succeed where Martemyanov failed last year? Strong performances by Holland can play a massive role in replying to this question.

“I think during the 10-game losing streak, we didn’t have any confidence as a team, and it felt like that any time the other team scored or got a lead on us, we just felt like the game was already over, even though there was still lots of time left in the game to come back,” Holland said. “And I think that’s something we’ve gotten better at that will help us in the playoffs. We believe more in ourselves that we can fight our way back in the games, and we have the offensive ability to score timely goals, and our penalty kill units will keep pucks out of our net. And, even if we’re down a goal or two, I think we believe that we’re able to fight back.” 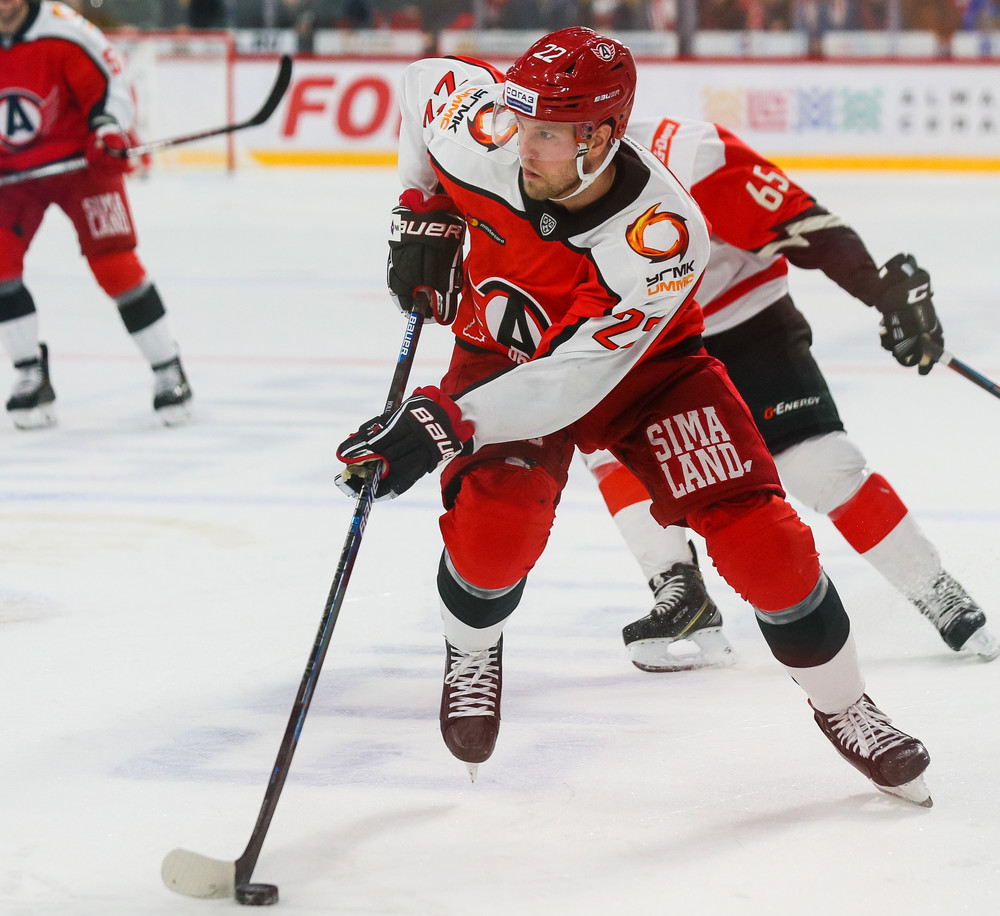