Man of the Week — Teemu Pulkkinen

KHL.ru’s weekly column ’Man of the Week’ goes on with Finland’s Teemu Pulkkinen. The Lokomotiv forward has just had a sensational 5-point performance against Vityaz, breaking several records for the Railwaymen and helping the Yaroslavl side climbing to the third spot in the Western Conference.

This year, Lokomotiv is having an excellent season, being the third seed in the Western Conference, trailing SKA by only two points with two games to recover. Recently, the Railwaymen completed a trade that started paying off when they sent Magnus Paajarvi Svensson to Dynamo Moscow in exchange for Teemu Pulkkinen. The Finn forward is in his third season in the KHL, and is at his third team after lining up first with Dinamo Minsk, then with Dynamo Moscow. Pulkkinen, who just turned 29, had an incredible performance on Sunday. With Lokomotiv thumping Vityaz with a 7-1 score, Pulkkinen scored five points, marking it the third time for a Yaroslavl player in the side’s KHL history. The only players capable of doing the same were Josef Vasicek and Alexei Mikhnov. Enough? Not quite. Pulkkinen also established a record, requiring only 7 minutes and 54 seconds to net his hat-trick. Earlier, the record belonged to Alexander Korolyuk, who scored three goals in a span of nine minutes and 19 seconds on Dec. 12, 2010 against Severstal — the same night when Vasicek posted five helpers for the Railwaymen.

It was Pullkinen’s second hat-trick of the season — the Finnish scorer already potted a treble in October, still while wearing the Blue-and-White jersey. Currently, Pulkkinen has 7 (4+3) points in four games with his new team.

Teemu Pulkkinen was born in Vantaa, Finland, on Jan. 2, 1992. Vantaa has given the KHL plenty of talent, including players like Ville Peltonen, Antti Pihlstrom, and two-time Gagarin Cup champion Mikko Koskinen. However, Pulkkinen soon started playing for Jokerit, where he had his pro hockey debut in 2008, aged only 16. In his first full season with the Jokers, then still playing in the Finnish Liiga, he broke Teemu Selanne’s record for most assists by a rookie, with 36. Pulkkinen had a strong junior career with Jokerit, helping the Helsinki side winning the Finnish U18 title, and being a fixture on top of the scoring race.

Naturally, Pulkkinen was a frontman for the Finnish national junior team at the U18 level. He skated in two U18 WJCs, helping Finland win two straight bronze medals. At the 2018 U18 WJC in Belarus, Pulkkinen was the tournament’s top scorer, with 15 (10+5) points in six games. He was also the best goal scorer and made the post-tournament All-star Team. Among other great performances, he netted a hat-trick to Andrei Vasilevsky in the bronze medal game. Other than potting goals in bunches for the Finn national team, in 2010, Pulkkinen was drafted in the NHL by the Detroit Red Wings. After his excellent rookie season with Jokerit, the Finnish flamboyant forward spent a further two years in the Finnish capital, then moved to North America, signing an entry-level contract with the Red Wings.

Following his career with Jokerit, Pulkkinen joined the Red Wings’ AHL affiliate in Grand Rapids, where he spent most of the next three years. However, he also had his debut in the NHL in 2013, then he scored 11 goals in two years for the Red Wings. During the 2015 Calder Cup playoffs, Pulkkinen led the AHL in goals, recording 14 goals and four assists in 16 games, and helped the Griffins reach the Western Conference Finals for the second time in three seasons.

However, in 2016 — after Pulkkinen helped Finland winning a silver medal at the IIHF World Championship — the Red Wings waived him and the Minnesota Wild consequently picked him up. From there, he was then traded to the Arizona Coyotes, and then picked in the Vegas Golden Knight’s expansion draft in 2017. He spent the 2017-2018 season in the AHL, keeping on recording astounding numbers, this time 65 (29+36) points for the Chicago Wolves. As a restricted free agent in the NHL, Pulkkinen then opted to pause his North America career, signing in the KHL with Dinamo Minsk.

Pulkkinen’s move to KHL was a success right away. He scored 15 goals in his debut season in Belarus, and the number rose to 17 the next year. He established himself as an excellent shooter and a dangerous forward. However, close to the 2019-2020 deadline, he was traded to Dynamo Moscow as the Minsk-based franchise had little chance to reach the playoffs. In Moscow, Pulkkinen scored 12 (6+6) points in 17 regular-season games, then helped the Blue-and-Whites defeating Spartak Moscow in the playoffs before the season was cut short by the COVID-19 outbreak.

Pulkkinen returned for a further season in Moscow, but was then traded to Lokomotiv. The rest is recent history, including his five-point performance against Vityaz. He and his Lokomotiv now have an incredible chance to have a deep playoffs run as the team led by Andrei Skabelka is gaining pace before the postseason. 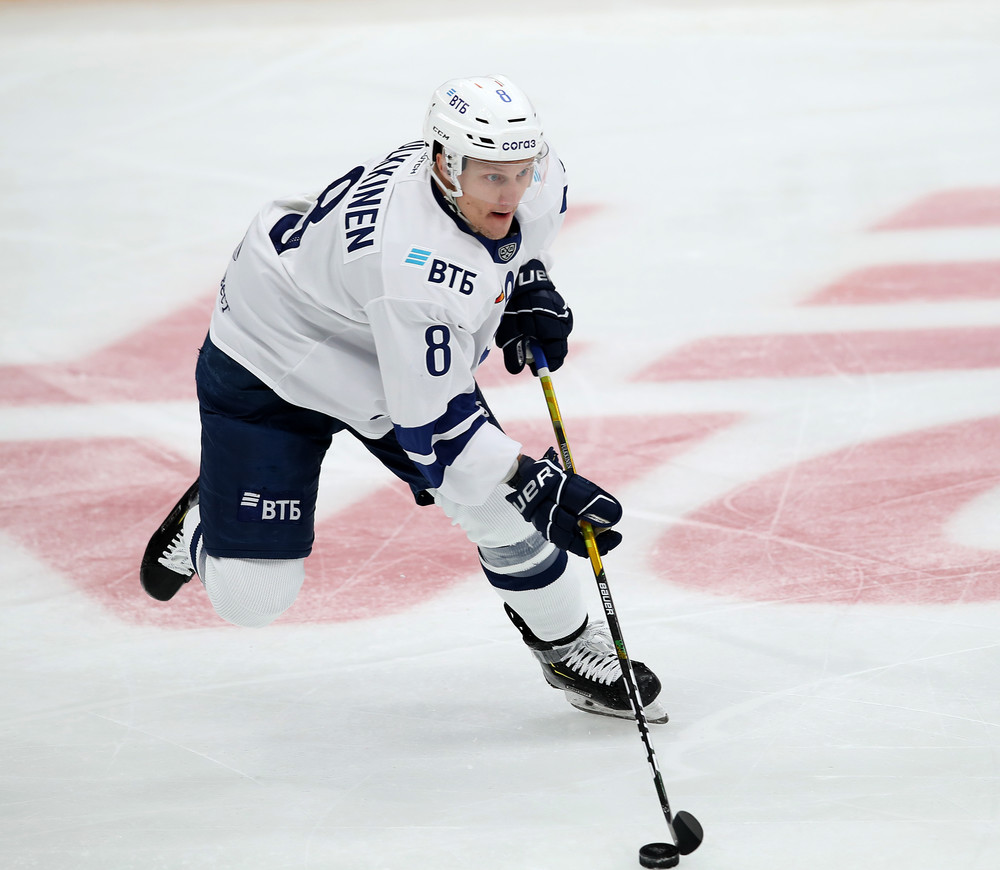