Man of the Week — Daniil Vovchenko

KHL.ru’s weekly “Man of the Week” series goes on with one of Severstal’s leaders, Daniil Vovchenko. The Cherepovets is currently the sixth seed in the Western Conference, two years after its last postseason qualification.

Daniil Vovchenko is having yet another strong season in Cherepovets and has now produced 15 (10+5) points for the Steelmen. Considered one of the big talents coming from the Severstal school, Vovchenko has struggled to achieve the same kind of success that other players from the city had. Vadim Shipachyov, Pavel Buchnevich, Dmitry Kagarlitsky, Bogdan Kiselevich, and Maxim Chudinov had deep Gagarin Cup runs and games with Team Russia at the highest level. Daniil Vovchenko, instead, needed a few more time to start producing at the KHL level. Maybe it was his size (5’10″, 172 lbs) that gave him a little disadvantage, but so far, he only played two games with the Russian ’B’ team in last year’s Deutschland Cup. However, things are changing. Right now, the Steelmen are on a five-game winning streak, and Vovchenko’s role is increasing. Moreover, in the Dec. 11 game against Spartak, the forward got the last laugh for the Steelmen with a fantastic lacrosse-style goal, after which even the team’s bench boss Andrei Razin was caught smiling by the camera. After the masterpiece against the Red-and-Whites, Vovchenko had another tally when he netted his tenth of the season, going top shelf after a cross-ice pass by his long-time linemate Vladislav Kodola.

Daniil Vovchenko was born in Cherepovets in 1996. At the cross of the century, Severstal had a few years where they were a top team in Russia; in particular, Cherepovets won bronze and silver medals in the Russian Superleague in 2001 and 2003, respectively. “I started playing hockey when I was four,” Vovchenko recalled in a recent interview with KHL.ru. “In the early 00s, there was a real hockey boom in Cherepovets, and every game was a soldout. We were lucky as our neighbor worked at the arena and we could visit the game for free. I was there when Severstal lost the finals to Lokomotiv. My brother’s and my favorite player wasn’t a skater, but the Canadian goalie Marcel Cousineau — he started playing in goal because of him, and, well, in a family, you can’t have two goalies.”

After playing in the junior leagues, Vovchenko ranked up to the JHL, where he played three full seasons with Almaz, Severstal’s affiliate. He made the JHL All-Star Game in 2014-2015 in Cherepovets. Naturally, such a talent couldn’t go unnoticed by the Russian junior national teams, and Vovchenko won different medals at the YOF and U17 WHC level before lining up for Russia in his first big international tournament. 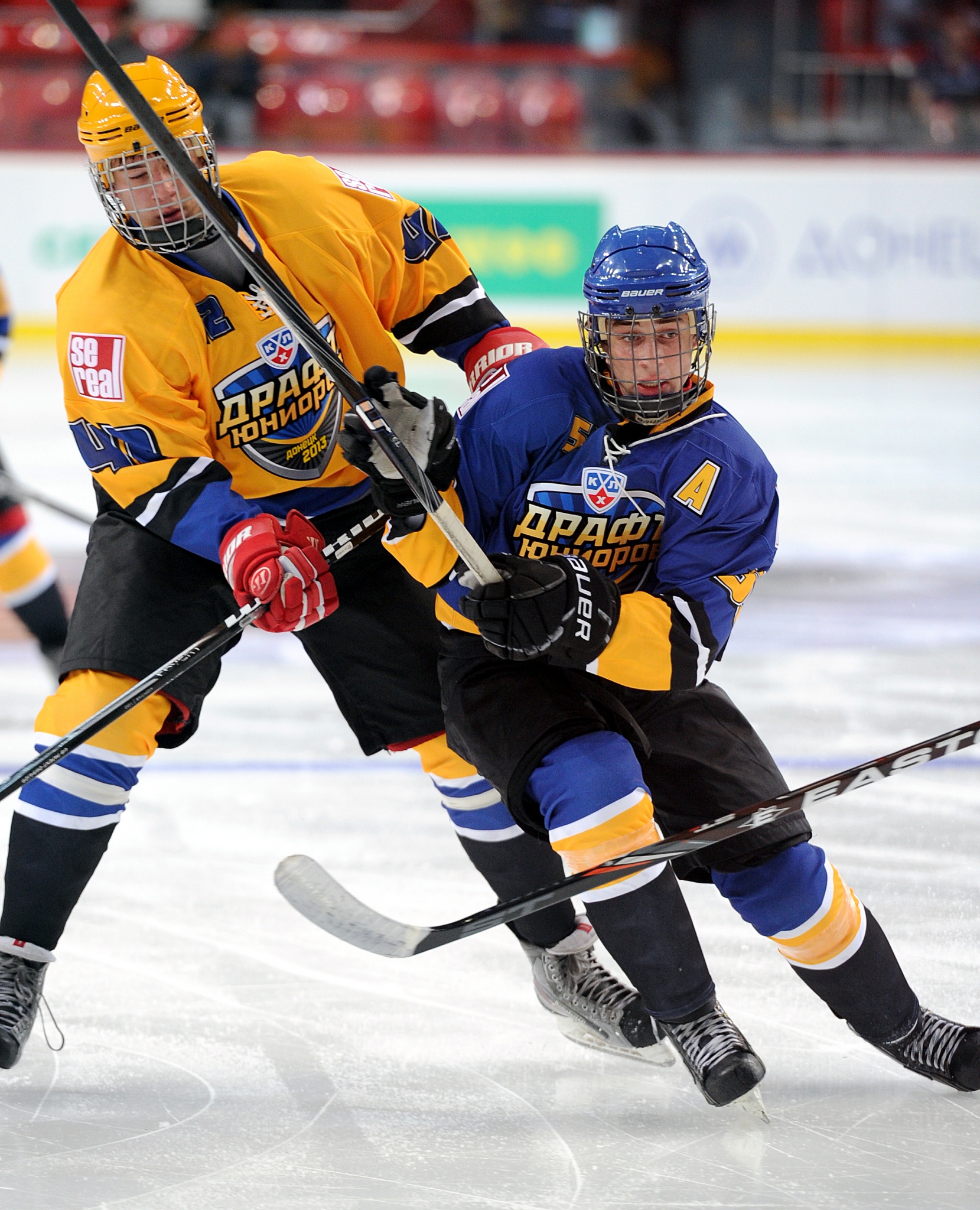 On the international stage

Vovchenko was called to represent Russia at the 2014 U18 WJC in Finland. It wasn’t the best tournament for the Russians, who suffered an early exit in the quarterfinals by the Czech Republic’s hands, losing 2-3 OT. The Czechs eventually lost the finals to the US, while Vovchenko was at the center of a controversial episode in the round-robin game against Team Canada. By then, the Cherepovets native had a good tournament, assisting Kirill Pilipenko’s game-winner in the opening match against Slovakia and having a two-point performance when Russia lost to Sweden 3-4 SO. However, early in the first period, Vovchenko was sent off with a game misconduct penalty following a checking from behind five-minute major. “I hit an opposition player, and he collided against the boards with his head. He was announced to have suffered a concussion, and I was assigned a three-game disqualification. However, that same day, I noticed that player running around the hotel as nothing happened. I think I didn’t deserve that ban. The player in question was Brayden Point, who recently won the Stanley Cup with the Tampa Bay Lightning.”

Vovchenko’s three-game ban kept on having its effect and influence, and he then wasn’t invited to the 2015 WJC as he needed to sit for further two games. “Not making the team was truly unpleasant,” Vovchenko added. “I really wanted to go. I was cheering for our guys, but when I was watching the finals, I thought that I could be there myself.”

Ranking up in the KHL

However, Vovchenko kept on working on himself, and the results are now evident. He needed some time, but he’s now reaping the fruit of all his hard work. “I remember my first KHL goal like yesterday,” he said, after being asked about his tally against Barys in the 2015-2016 season. “We were down 0-3, then we managed to rally up, and I scored the game-tying goal. Pavel Buchnevich sent the puck to Yuri Trubachyov, and Trubachyov moved it to me. It was the biggest goal in my career, and I think that only some goals in the playoffs may beat it.”

Finally, now Vovchenko is enjoying the status many predicted he could reach. “Earlier on, I had a problem,” the forward explains. “I couldn’t add mass to my body. The coach says that it’s about the time to be a leader and to take my responsibilities. I think that my third season in the KHL was the key one — Trubachyov, Maxim Trunyov, and I were a great line, I scored many points, and I grow up a lot as a player.”

With Severstal Cherepovets being one of the Western Conference’s surprises, it’s not unrealistic to think that the Steelmen will reach the playoffs. Severstal only won a single series in their KHL history — against Lokomotiv in 2013 — and it’s time for Vovchenko to start scoring big goals not only in the regular season but also in the playoffs. 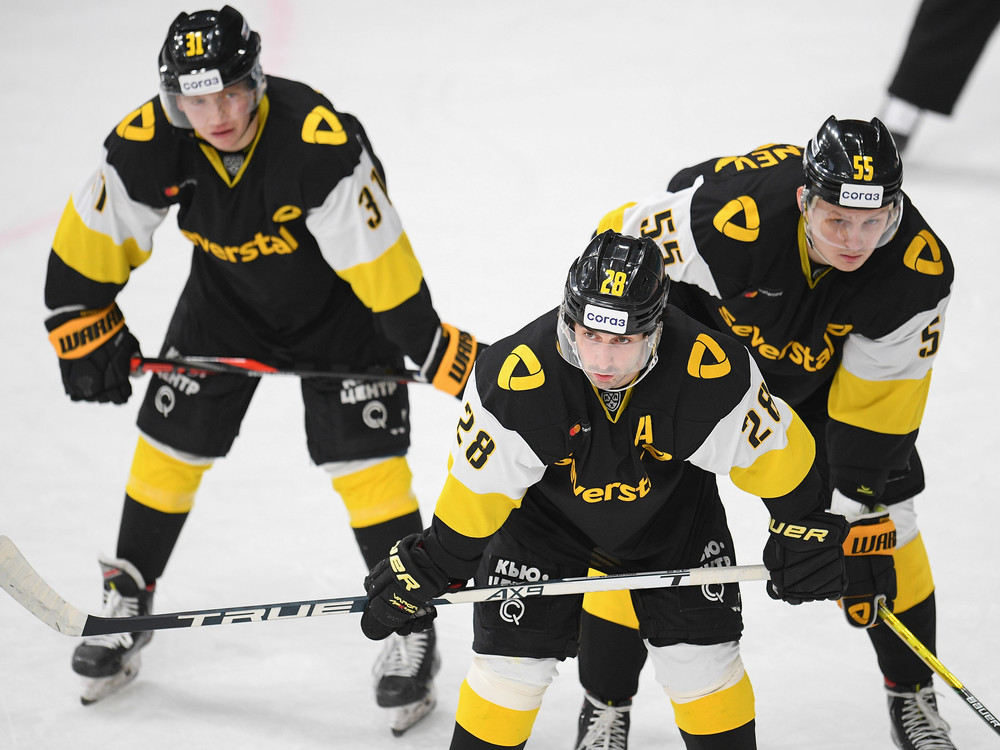