Man of the Week — Brandon Kozun

KHL.ru’s weekly ’Man of the Week’ series goes on with Brandon Kozun. The American-born Canadian forward is back on business, scoring 14 goals in his first 23 games of the season and looking in great shape as he was in his hey-days with Jokerit and Lokomotiv.

Dinamo Minsk is red hot this season, currently the fourth seed of the Western Conference, and looking forward to returning to the playoff. The Canadian forward is equally hot, splitting the lead in points for Dinamo with Ryan Spooner — both imports produced 24 points for the Belarus franchise. Brandon Kozun, 30, trails only Yegor Sharangovich for goals — he tallied 14 goals against Sharangovich’s 17. Dinamo Minsk is missing the postseason qualification since 2016-2017 and is yet to win a single round, having lost all the series they played in its four playoffs — twice to Lokomotiv Yaroslavl. However, this year it will be a fantastic chance to revert the trend, considering that Dinamo is winning game after game, and they look like a hard-to-deal-with team with 18 wins amassed so far. Naturally, Kozun is having a significant impact on Dinamo’s play. The forward has recently had a nine-game scoring streak and a seven-game goal-scoring streak, with 13 (8+5) points. He also had four multiple-point games for Minsk, netting two game-winners.

Brandon Kozun was born in Los Angeles, California, and moved to Canada when he was ten years old. When he was ten, his family settled in Calgary, but by then, he was already playing hockey for six or seven years. The American-born Canadian forward returned to the US to play a season with Shattuck St. Mary back in 2005, and then he moved up north again as he first played in the AJHL, then ranked up and started playing with the Calgary Hitmen of the WHL.

First success on the international scene

A top scorer at the junior level, Kozun was sought-by by both American and Canadian scouts in sight of the World Junior Championship. Despite his short stature of 5’8″, or 173 cm, the native of Los Angeles outscored players like Jordan Eberle or Brayden Schenn. In his final season in junior hockey, in 2009-2010, Kozun led the league and won the Bobby Clarke Trophy to the WHL’s top scorer with 107 (32+75) points, and also leading the Hitmen to the WHL championship being the top scorer in the playoff as well, with 30 (8+22) points. That year, he was part of the Canadian team that returned home with a silver medal at the 2010 IIHF WJC in Saskatchewan. In the meantime, in 2009, the Los Angeles Kings selected him with the 179th overall pick. He was ignored in 2008 allegedly due to his diminutive size.

After a triumphant 2009-2010 season, Kozun turned pro and started playing in the AHL for the Kings’ affiliates, the Manchester Monarchs. In the AHL, Kozun posted decent numbers, but it wasn’t enough to get to the Kings’ lineup. After four seasons within the Californian organization, in January 2014, Kozun was traded to the Toronto Maple Leafs.

Back in Canada, the forward will finally have his NHL debut, but failing to score until February. In total, he had 4 (2+2) points with the Maple Leafs, which he will leave at the end of the season to seek better options in Europe.

In the 2015 offseason, Brandon Kozun inked a one-year deal with Jokerit. In Finland, Kozun made an impact right away, leading the club with 49 (15+34) points in his debut season in the KHL, also earning a ticket to the league’s All-Star Game. However, Jokerit will then lose the first round of the playoff to Torpedo Nizhny Novgorod. After his debut season with the Jokers, Kozun signed with Lokomotiv Yaroslavl. With the Railwaymen, Kozun had a fantastic first season, with 56 (23+33) points in 59 regular-season clashes and another call to the KHL All-Star Game. However, he will then slow down, posting 74 points in the next two seasons combined, a decent loot, but not enough for a player of his caliber. While representing the Railwaymen, in 2018, Kozun helped Canada win the bronze medal at the South Korea Winter Olympics. 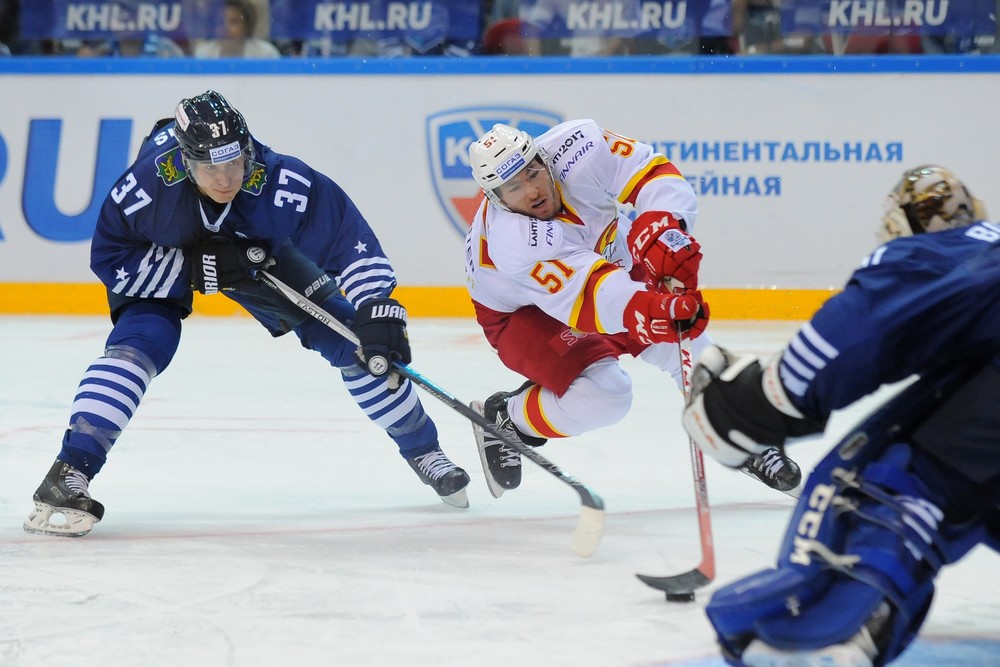 Trying to change atmosphere, Kozun signed with Metallurg Magnitogorsk, who was then seeking to rebound after a disappointing season. However, Metallurg ended up having an even more disappointing campaign in 2019-2020, with Kozun scoring an all-time low of 22 (9+13) points. The Magnitogorsk franchise ended the regular season only as the seventh seed in the Eastern Conference. It was then defeated 4-1 by Barys before the season was halted due to the COVID-19 spread, and Kozun only had a helper in the series.

Return to the Western Conference

In the 2020 offseason, Brandon Kozun moved West again, signing with Dinamo Minsk. In Belarus, he was expected to return the player he was earlier, scoring at the pace he did with Jokerit and Lokomotiv Yaroslavl. The move has paid off for both the team and the forward. Kozun is now one of the first options in the offensive zone for the Belarus franchise, and Dinamo is eyeing a return to the postseason after a three-year hiatus. And if Kozun’s line will keep on clicking and scoring, the club may also win its first playoff series.