KHL.ru presents a new issue of its ‘Tactical approach’ series dedicated to the KHL teams’ different styles. This time, Lauri Marjamaki’s Jokerit gets under the lens.

Jokerit’s main advantage is the quality of its players. With 180 goals scored, the Finns trail only CSKA. Moreover, only three teams had fewer shoots than Marjamaki’s team (1577), but the quality of the performers allow Jokerit to lead with an ample gap in the shooting percentage rankings (11.41).

One of Marjamaki’s game central element is the constant movement of the puck. Considering the puck possession-based game of his team, it’s clear that Marjamaki managed to transmit his philosophy to the players perfectly. Moreover, Jokerit not only thrives on moving the puck in the offensive zone ideally but plays an energic style organizing dizzying plays. Jokerit has plenty of players who fly around the rink with an average speed of at least 15 km/h (9.32 mph): Steve Moses (15.2), Brian O’Neill (15.1), Henrik Haapala (15.0), and Antti Pihlstrom (16.1).

The Finns’ constant non-standard, East-West approach is logic: KHL teams usually pay a lot of attention to building the correct defensive game in their zone, and most of the sides adopt a strict position-based strategy, and Jokerit needs to figure out how to find a breach in the dam.

Through this constant movement, Jokerit players manage to pull the opposition out of their position in the defensive zone, while the high quality of the performers allows for perfect use of the gained space in almost every play to pose the opponents a serious challenge. One can imagine that it’s impossible not to see Marko Anttila and his two-meter body. However, Traktor was so focused on neutralizing the fast movement of the puck around its crease that no one even noticed that the towering forward twice easily found a sweet (and empty) spot in the slot to rifle home the 2-2 goal that allowed Jokerit to revert the score and win 3-2. 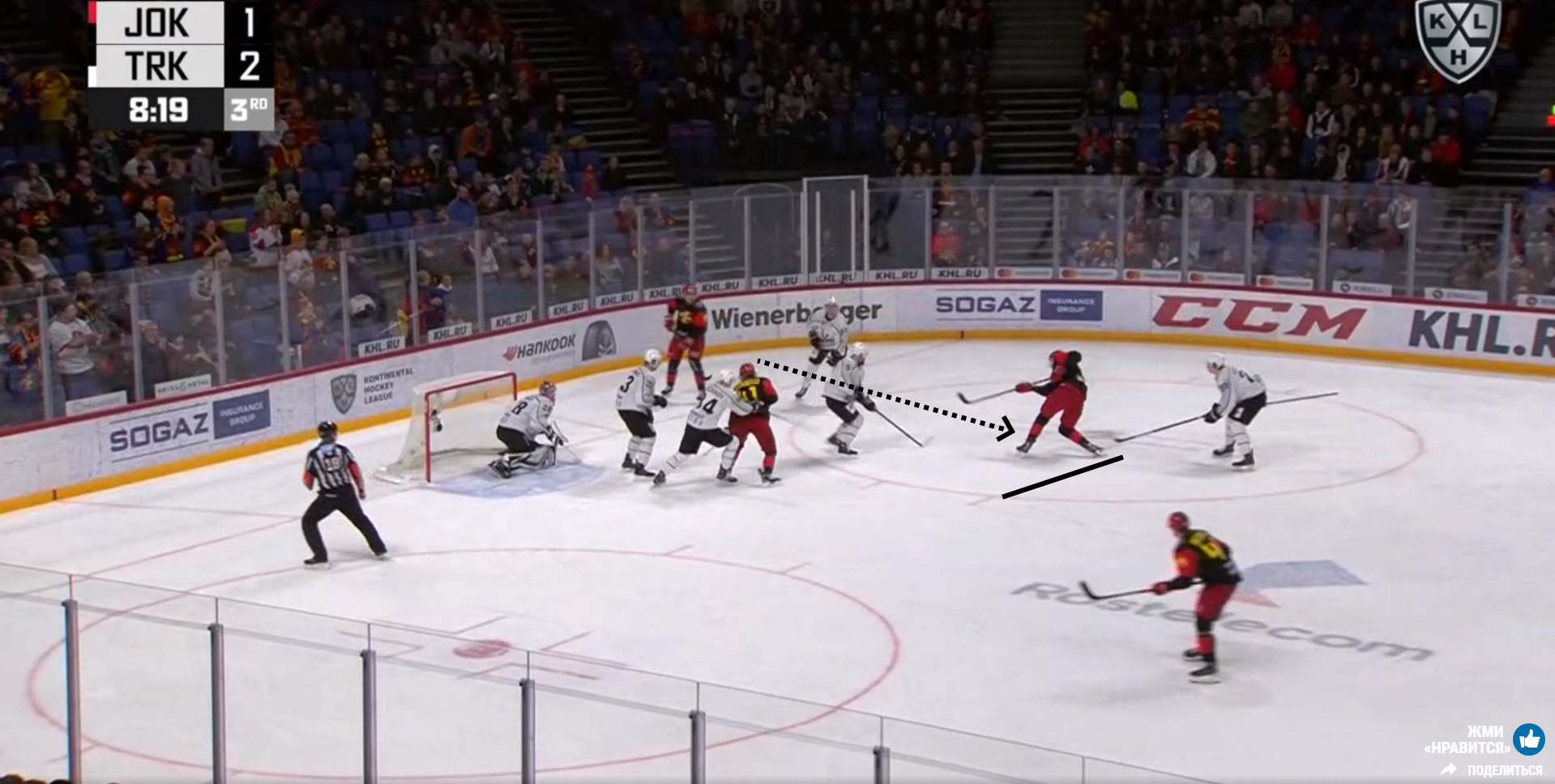 Marjamaki’s biggest advantage is that he doesn’t limit this player creating a frame when they are with the puck in the offensive zone. Jokerit players work a lot with the puck on the stick, aren’t scared of moving around, showcase excellent protection of the puck and don’t worry too much about getting counterattacks. The Finn side can allow itself not to think too much – in a positive meaning – and this approach both brings results in the offensive zone and covers the creative style of the team.

A good example is what happened during a game against Dinamo Riga: the player with the puck got the best out of the chance with a long-range diagonal pass, even if, with an interception, a dangerous, 2-on-2 counterattack – with one player running back from behind the puck – could have arisen. If Jokerit would play a simpler and more accurate game, in this case, they would just dump the puck along the boards seeking a battle to recover it. It’s not the worst variant – quite the opposite since so many goals get scored through it, but it’s the diagonal pass itself that allowed Jokerit to create a big scoring chance.

This episode is a real marker of how Jokerit keeps its head fresh without thinking too much, getting results as, judging by the stats, it’s the ideal approach for its players. Moreover, a player is on the slot screening the goalie, as it most often happens when Jokerit plays the puck in the offensive zone. Marjamaki’s team knows how to get the puck closer to the net, and the player screening the goalie further increases the chances of burying it in. Of course, the opposition’s goalie and luck have a big impact, but this kind of organization often manages to tip the scale in the right direction. 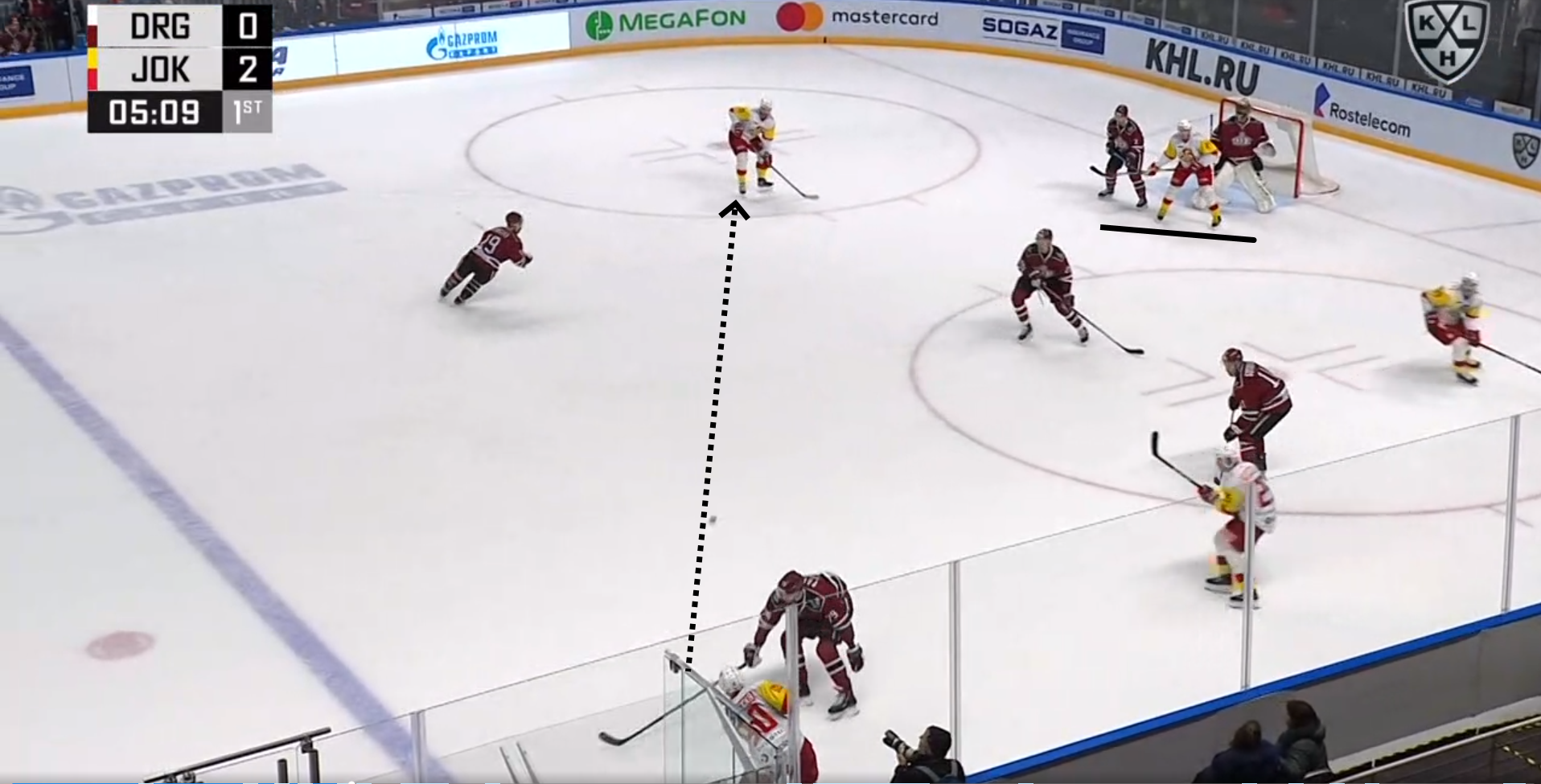 Another example with tons of fast puck movements and excellent skating is the second goal that Jokerit scored in the Jan. 30 game won against Metallurg.

With such a high volume of movement, chemistry plays a key role. Jokerit players successfully mix up their positions, including defensemen, and this allows for a much more dangerous play if compared to a more standard, and strict game with defensemen shooting from the blueline as they almost follow a script. Jokerit’s play is based on fast and constant movement, with players whipping the puck on the net. 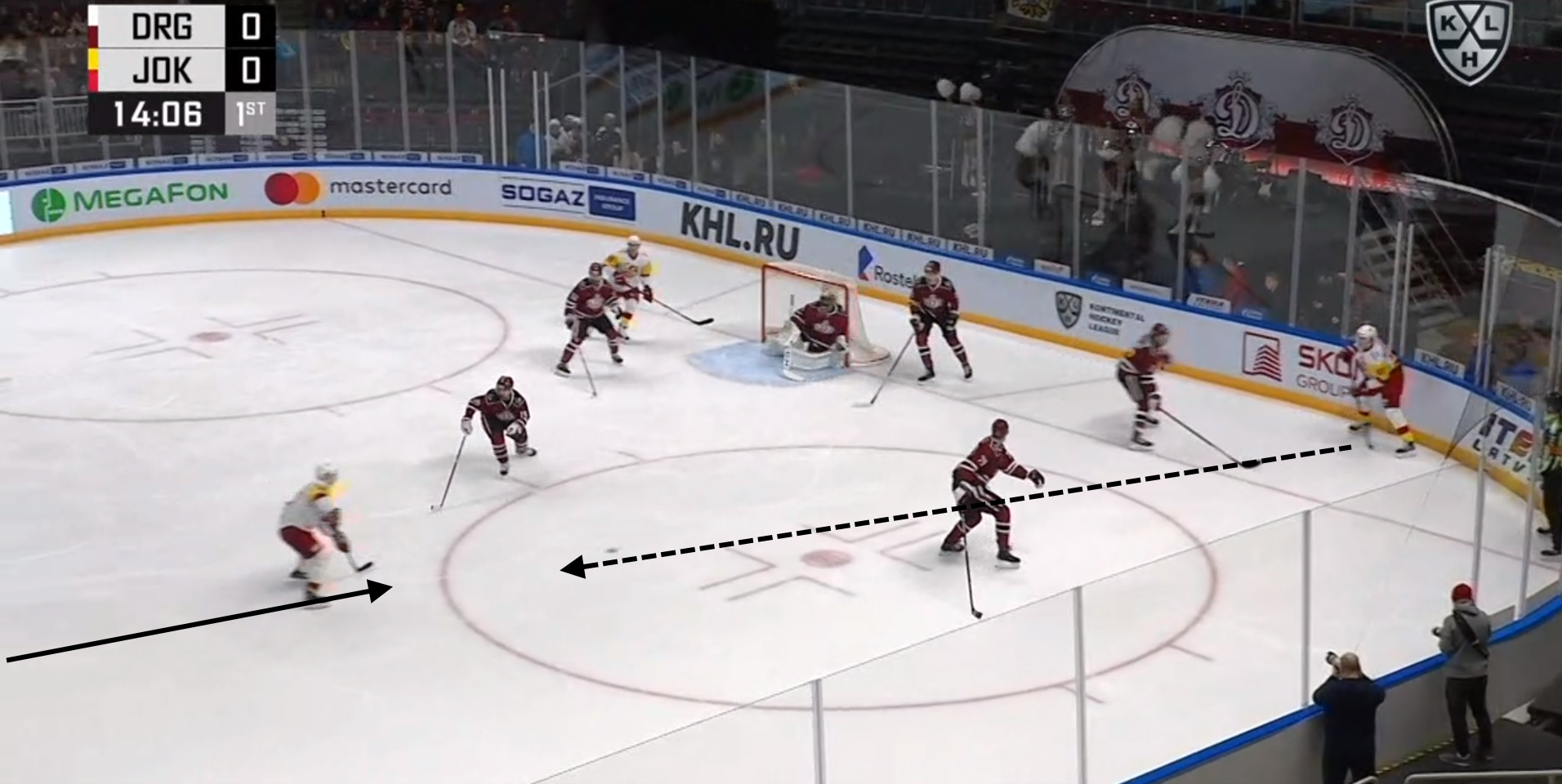 Probably, Jokerit’s offensive model is going to cause a lot of damage in the playoffs. It will be hard to face the Finns with a zone defense because of their constant shuffling. However, playing man-on-man won’t be any easier, as all the players display a high level of play that often allows them to outskate, outmuscle, and outsmart the opponents. 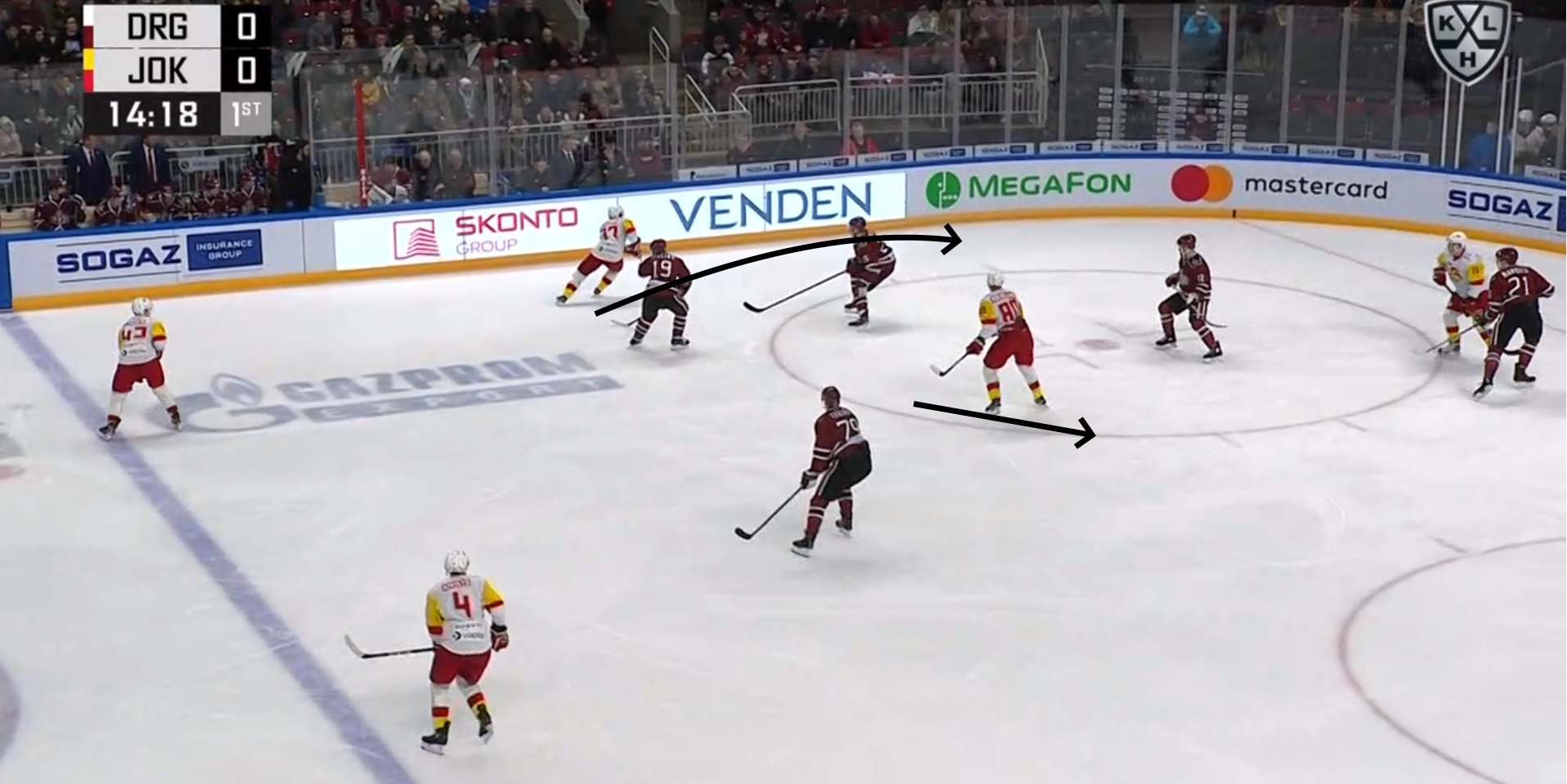 Jokerit is dangerous not only on natural offensive plays but also after faceoffs. In the next episode, after the whistle, the player on the right gets the puck and immediately moves toward the boards. Two other players muscle their way to the slot. A D-man moves to the crease, while the other one covers the zone as all the Jokerit’s unit is moving. Naturally, Jokerit scored on this perfectly-orchestrated play.

Like most of the KHL teams, Jokerit executes its forechecking with the so-called “one player and a half” scheme. However, from time to time, the side plays a more aggressive scheme with two forwards in the opposition’s zone. In the next episode, Dinamo Riga’s players weren’t able to start an offensive play because of the two Jokerit forwards pressing in the zone and not allowing them to have a long pass forward as they were initially planning. 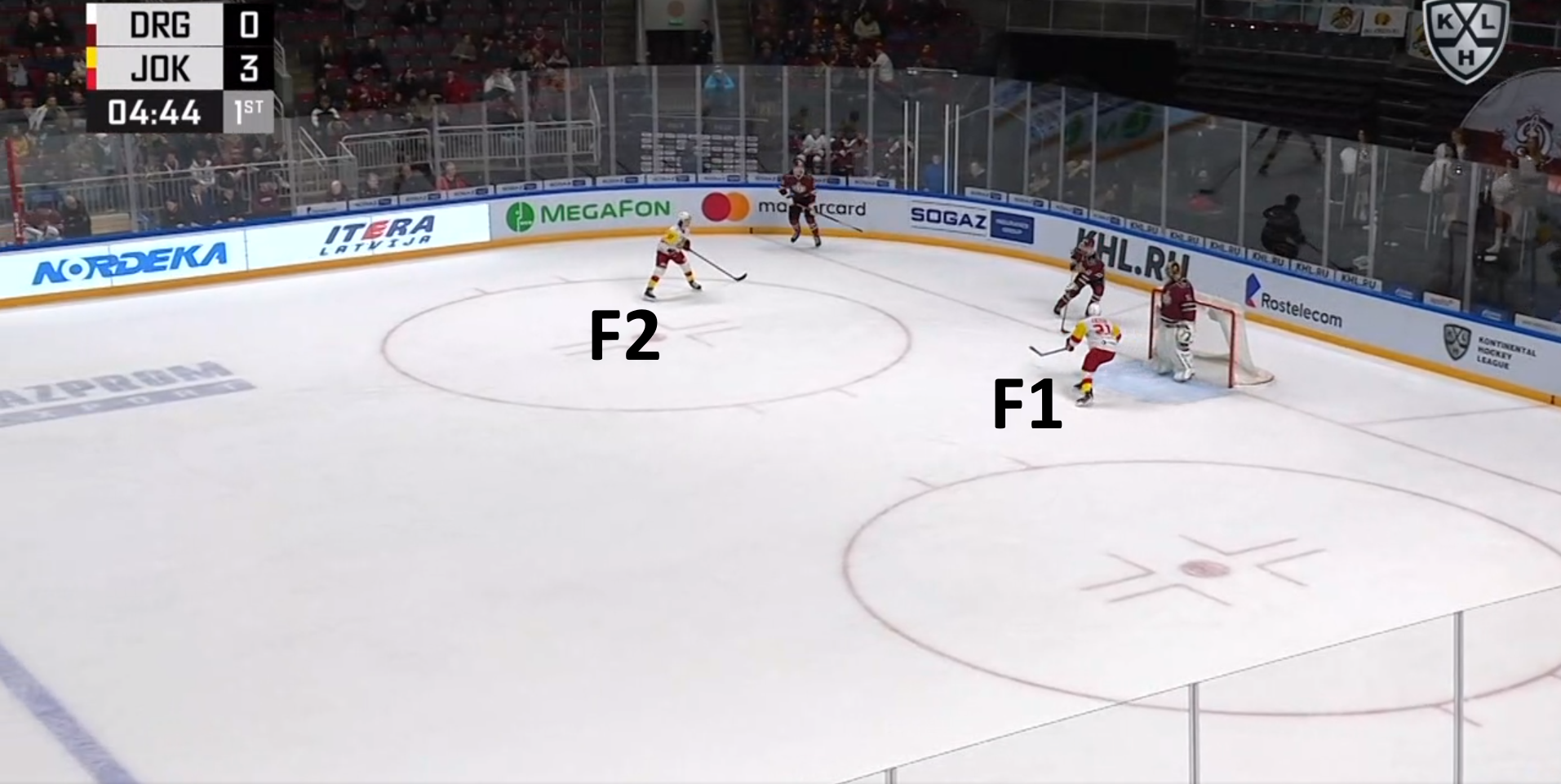 However, Lauri Marjamaki’s team is in eighth place in the league for allowed goals (147). Most likely, this is due to the player sometimes taking too much hazard and the coaches’ tardive corrections to what happens on the ice.

The first shift of the game against Dinamo Riga: Jokerit’s player starts moving forward with the puck, without noticing that all his linemates were going to change. This caused a giveaway in a bad spot that could potentially create a scoring chance for the opponents. Jokerit makes its change and, at the very first minute of the game, gets a two-minute penalty for too many men on the ice. Not bad, isn’t it? Naturally, Jokerit had a very good game that night, but these episodes show that they aren’t perfect and coaching problems can potentially arise. 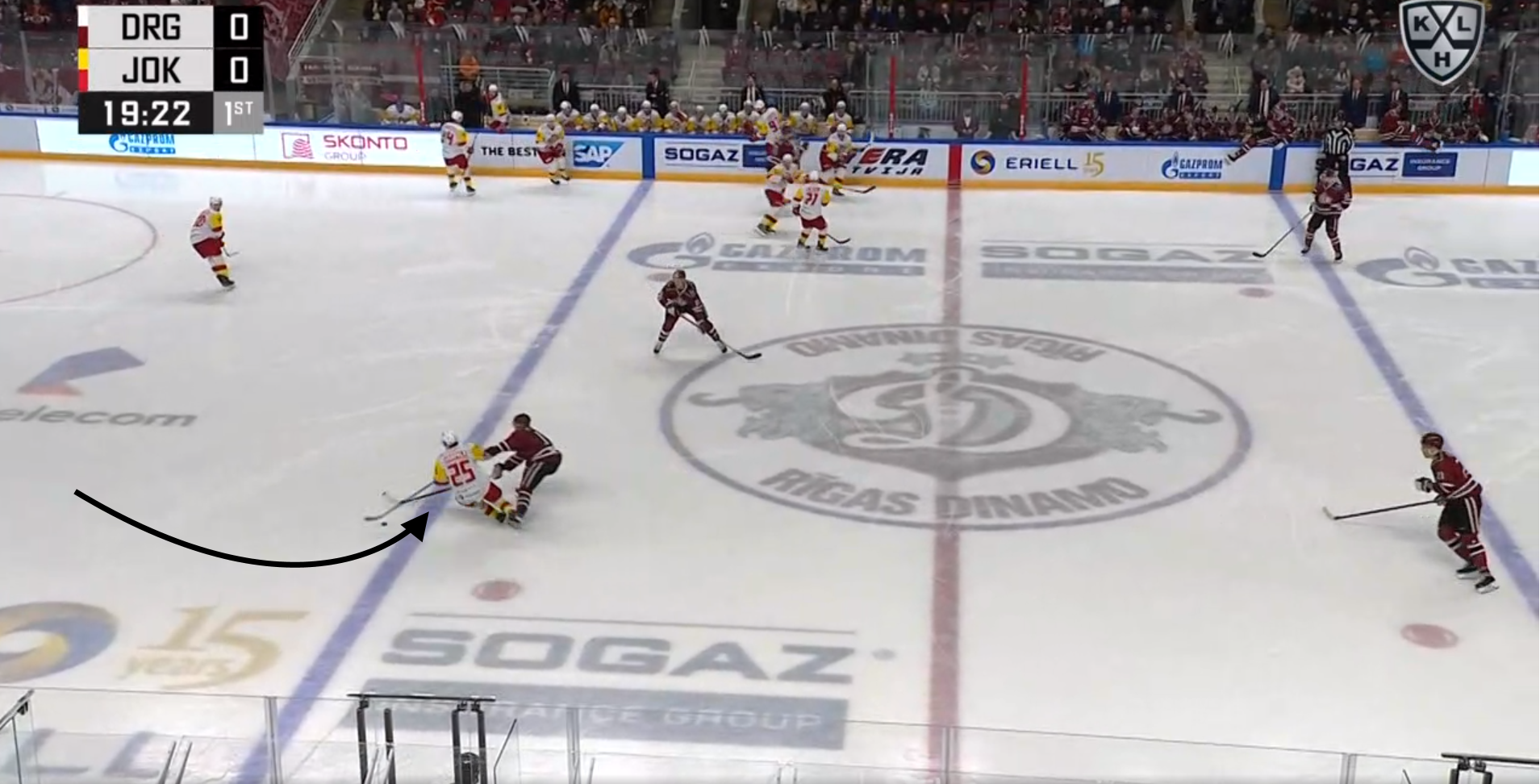 Jokerit’s game appears more and more confusing as it approaches its net. This is caused by both the adventurous style in the neutral zone, and the desire to gain the highest possible speed and transfer the game to the team’s favorite end. 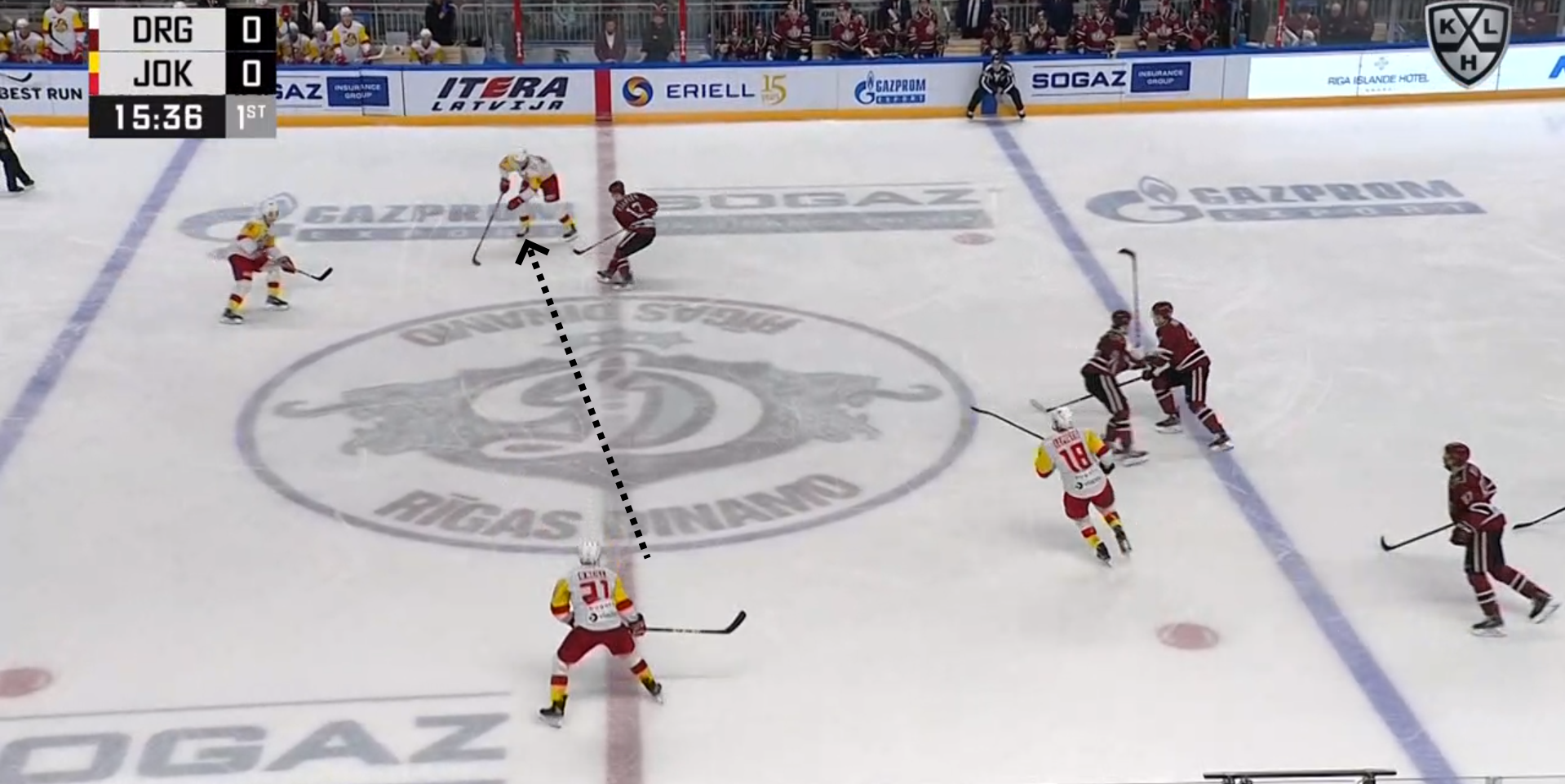 Another problem is that too often, an opposition forward is left alone deep in the zone without any challenge because of the mixed nature of the team’s defense that lacks a proper structure. Some players play man-on-man, while others seem more to be covering a zone, especially those closer to the net. This approach is not suitable for Jokerit’s creative players. They should either play zone defense and limit the opposition’s actions close to the crease or to take man-on-man and rely on individual skills and tenacity. This mixed system can have dramatic costs for the team in the playoffs.

Jokerit starts his plays in different variants, mostly with two different approaches. The first one is starting from the five back position and then having the whole unit moving on with two men moving fast on the wings as the defenseman seeks for the best option. However, breaking this kind of play is not the hardest task for the opposition. A good example is the Feb. 1 game against Lokomotiv Yaroslav, when the Railwaymen scored the first goal after taking away the puck from the Finn side after they tried organizing their attack from the five back scheme.

Another option is based on short passes in the defensive zone with a defenseman moving up from the blue line and then having the next pass. Considering Jokerit’s players, theoretically, this is a good idea. However, with some pressure, the players start making mistakes and this is another consequence of the lack of structure in Marjamaki’s game plan. Without detracting, of course, from the advantage mentioned above, but both the goals allowed in Feb. 3 game against Dinamo Riga (2:4) are a consequence of this kind of problems.

Moreover, one of Jokerit’s biggest advantages is its strong game with the man advantage – with the Finn side trailing only CSKA for powerplay percentage (23.3%). Jokerit’s main scheme is the 1-3-1; however, one of the wingers usually helps the defenseman on the blue line, thus almost having to players on the point. The players’ universality and skating ability allow at least a player to go unnoticed and create a scoring chance. A great example is Peter Regin, who scored more than half of his sixteen regular-season goals (9) with the man advantage, mostly with a shot from the left circle. 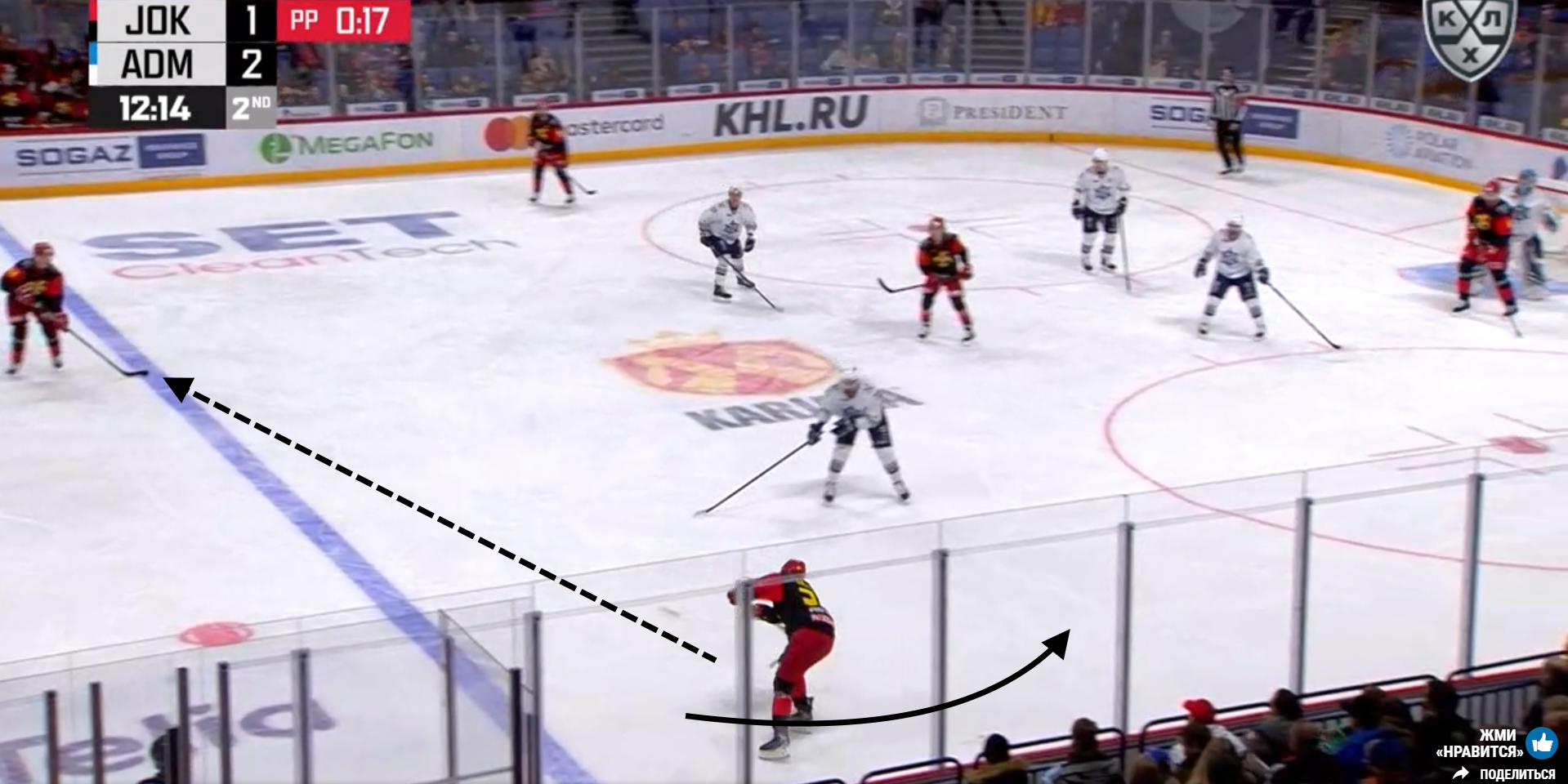 However, Jokerit’s excellent powerplay is counterbalanced by an average penalty-killing percentage (14th place in the rankings). Here, the players’ technique is not a key factor as much as the coaches’ preparation work and bench management. For example, let’s consider once again an episode against Lokomotiv. The Railwaymen play 1-3-1, while the Jokers fail to cover diagonal passing lines. Lokomotiv has three unchallenged players on the same line, plus a player screening the goalie without a white jersey in sight.

To sum it up, Lauri Marjamaki managed to transmit the team his philosophy and game plan, with a good result in the offensive zone. However, in the playoffs, Jokerit may suffer the lack of a more structured approach. Will the opponents get an advantage for it? We’ll know soon!