Man of the Week – Tomas Hyka

Tomas Hyka has been in fine form of late, posting a hat-trick in Monday's game against Dinamo Riga. It was the most productive match so far for the Czech forward, who is in his first year in the League. With 11 (5+6) points in 17 games, Hyka is currently the team's top scorer.

However, Tomas Hyka's hat-trick party was spoiled by Dinamo Riga's excellent performance, which allowed them to get an unexpected 4-3 win over Chelyabinsk. "Of course, it was fantastic to hear our fans chanting my name," Hyka told KHL.ru after the game. "I am glad to have scored my first hat-trick in the KHL. However, I'm very disappointed that we lost. The only thing that ultimately counts is the team's result."

Hyka, however, is not only scoring goals for Traktor. Bench boss Peteris Skudra put him on the first line since the start with his fellow Czech countrymate Lukas Sedlak and the Canadian winger Andrew Calof. Only Sedlak boasts a higher time on ice, with 19 minutes a night. Hyka is also his team's top assist-man, with six helpers. Moreover, his plus/minus indicator is a favorable one - especially for a team that is just barely making the playoffs for now. This season, he's running at +5; only Calof is better than him among the forwards.

As it is often the case with the most talented players, Hyka regularly played with and against players significantly older than him. After making his debut in the Czech Republic's senior league in 2011, Hyka moved overseas, where he played two seasons. Then, he spent another four years in Europe, split between Sweden and his native Czech Republic. In the meanwhile, he was drafted by the Los Angeles Kings.

In 2017-18, Hyka was part of the Vegas Golden Knights' inaugural roster, but in two years, he only managed to play 27 games in the big show.

"I spent two seasons with the Golden Knights, and I played a few games in the NHL, it was an incredible experience," Hyka told KHL.ru this summer. "Last year I played mostly for the Chicago Wolves of the AHL, and we reached the Calder Cup finals. Even if we didn't win, it was a tremendous experience. Getting to the NHL would have been very hard. The team signed so many new players, and there was no room for me there." Playing in the world's central entertainment city was a new experience for Tomas. "It was fun to be there. In Vegas, it's an eternal show. However, it's a fantastic place with many good people. I enjoyed spending my free time there." In total, Hyka posted 7 (2+5) points in 27 NHL games, with 88 (31+57) in 93 matches in the AHL.

Tomas Hyka in Chelyabinsk to win the Gagarin Cup 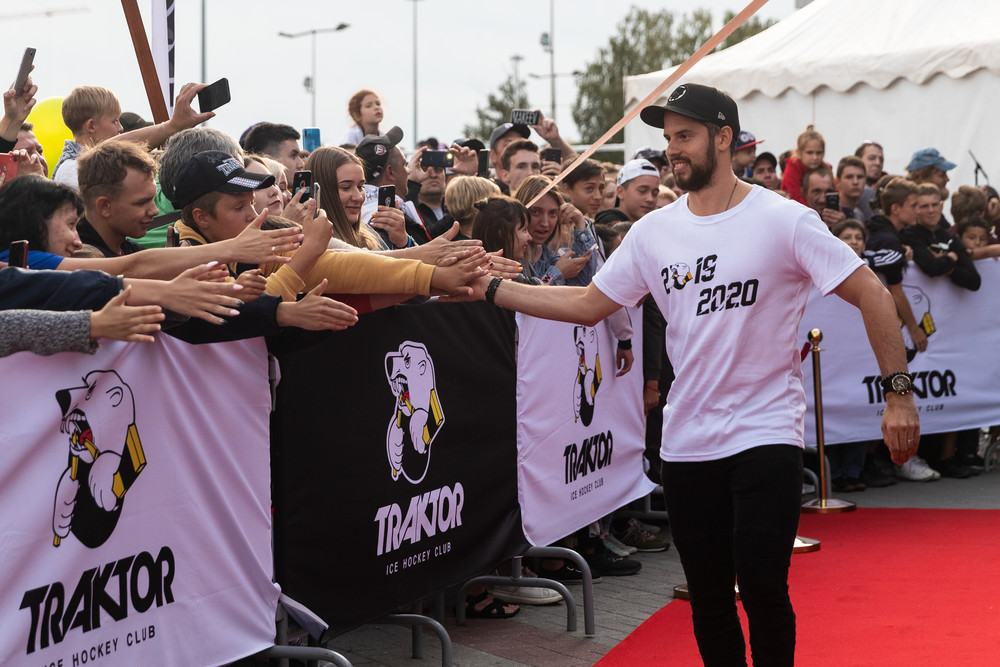 Hyka was a well-established player overseas, and probably would have had a chance to sign a new contract, but choosing the KHL, he had an opportunity to play at a high level and closer to home. The resilient forward took some time to get his first KHL goal, earning the right to bring the puck home only at his eleventh game - a 2-1 win over Lokomotiv - after a three-game drought. And now, his acclaimed hat-trick against Dinamo Riga, quite a feat, in spite of his team's loss.

Other than being closer to home, Hyka will also have more chances to play with the national team. We're now getting closer to the start of the Euro Hockey Tour, which kicks off on November 7 with the Karjala Cup in Finland.

The Czech winger seems to be excited with the opportunity: "I'm always ready to play for the national team, and I never declined an invitation," Hyka says. "It will be exciting to represent the Czech Republic at the EHT. I played two IIHF World Championships, and it was a great time." Both times, however, the Czech Republic was defeated at the quarterfinals stage. "Yes, once by the Russians, and another time by the USA," Hyka recalls. "The latter was particularly bad because we had an excellent team, and it was a close game." If Hyka goes on with his fantastic play, he will have excellent chances to represent his country once again at the 2020 IIHF World Championship in Switzerland.