Old foes and upsets – the KHL week in review

The playoffs are getting down to the sharp end with two powerhouses maintaining their dominance of the west while the east has seen a series of surprises. Elsewhere, Lokomotiv set a new record for the youngest ever KHL roster, while Taylor Beck and Juha Metsola have emerged as new stars in the current playoffs.

Familiar foes face off in the West

The Western Conference final pits CSKA and SKA together once again. The two Army teams dominated the regular season, where they were the only teams to reach 100 points, and have taken that form into the playoffs. CSKA dropped just one game to reach this stage, an overtime loss against Dynamo in game two of the Conference semifinal. SKA has faced a bit more work, forced to recover from 0-2 in its series against Spartak before downing Lokomotiv 4-1.

It’s the fourth time in five seasons these two have met at this stage. The sequence began in 2015 when SKA made history in recovering a 0-3 series deficit on its way to a first Gagarin Cup triumph – Patrick Thoresen’s 51st minute goal snapped a 2-2 tie in game seven to send Petersburg forward. One year later, CSKA got revenge with a sweep of SKA. The teams did not meet in 2017 but normal service was resumed last year and CSKA again had the edge, winning the series in six games.

Depth in the East

This year’s Eastern Conference final is unique. For the first time, none of the top three seeds have made it. That’s job done for Avangard and Salavat Yulaev, and proof of the depth of competition in the Urals and beyond. In Omsk’s case, the obstacles of defending champion Ak Bars and Chernyshev Division top dog Barys were overcome with the loss of just one game. Ufa went all the way to edge past Metallurg before finishing off regular season leader Avtomobilist in five games.

It’s been a postseason of surprises, and now the East has a final that recalls one of the greatest shocks of all. In the KHL’s first season, Salavat Yulaev topped the regular season while Avangard, affected by the tragic death of young forward Alexei Cherepanov, eventually came 16th. The teams’ playoff match-up was expected to be a routine win for a Radulov-powered Ufa roster but Avangard came out on top in 2009. Ten years on, can Nikolai Tsulygin’s Salavat Yulaev get revenge? 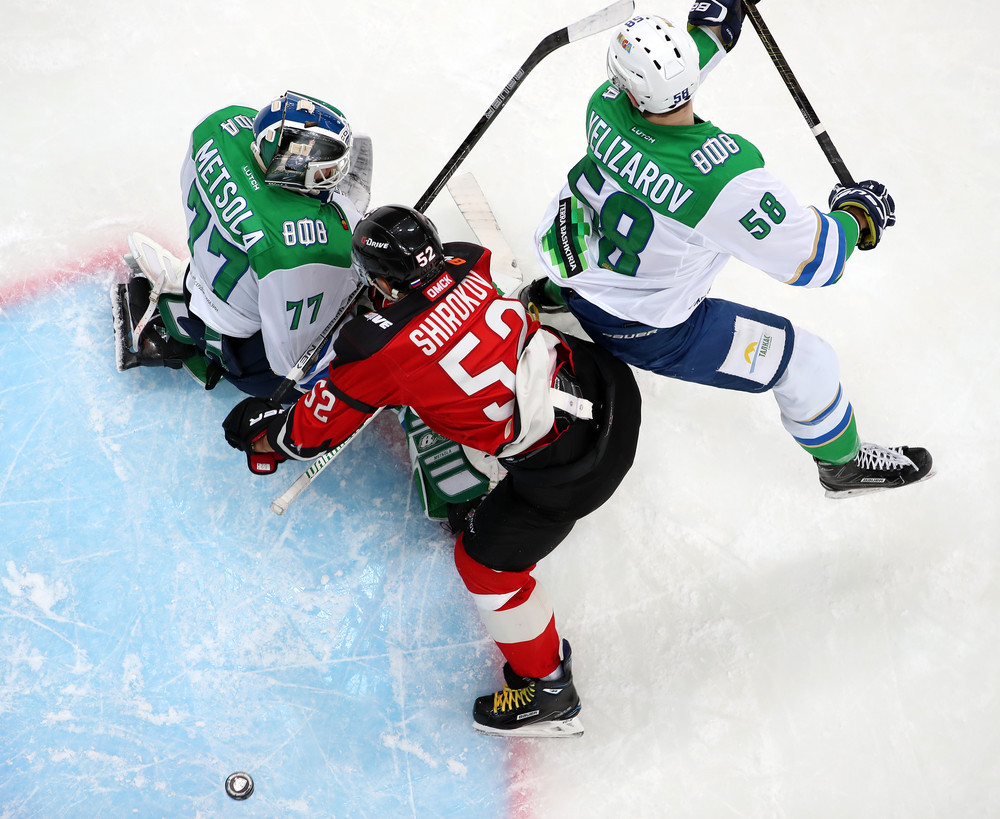 Avangard defenseman Maxim Chudinov hit the headlines with a rather special goal in game four of his team’s series against Barys. As his team changed on the fly and looked to start an attack from its own zone, Chudinov advanced to the blue line and fired a skidding shot that deceived Henrik Karlsson. Nothing unusual? But this was Chudinov’s own blue line! It was no fluke, either. Two days later, in a similar situation, the 29-year-old went to the same spot on the ice and did it all over again.

Gusev and Hartikainen lead the race

The playoff scoring race sees SKA’s Nikita Gusev and Salavat Yulaev’s Teemu Hartikainen out in front with 14 points apiece. The pair have identical records – six goals and eight assists in 14 games. For Hartikainen and Ufa, its been a case of a devastating line in top form. The Finn’s partnership with Joonas Kemppainen and Linus Omark has produced 35 points so far and the trio is out in front in terms of plus/minus stats. Gusev, meanwhile, has combined well with Sergei Plotnikov and has been the engine of SKA’s imposing power play: the Army Men have 16 goals on the PP, one more than Avangard, and have converted one in three of the penalties against their opponents.

Taylor Beck’s two seasons in the KHL have been a story of steady progress. The Canadian, who played most of his 92 NHL games with the Predators, joined Avtomobilist at the start of last season but moved to Kunlun Red Star part way through. In China he rediscovered his scoring touch with 22 (9+13) points in 39 games for a struggling team this season. That earned a deadline day move to Avangard and set him up to be the key set-up man in this year’s playoffs. Beck, 27, has a league-leading 11 assists in nine postseason games so far. He’s on an eight-game scoring streak and, with two goals taking him to 13 points, he has the best points per game ratio of any current scoring leader.

Andrei Martemyanov, Avtomobilist’s head coach, acknowledged that his team hit a roadblock in the form of Salavat Yulaev’s Finnish goalie. “Juha Metsola is the best goalie in the KHL right now,” he said after the end of the Eastern Conference semi-final on Friday. The stats back him up: the 30-year-old from Tampere has stopped 96.3% of the shots he’s faced in postseason. That kind of form has made Salavat Yulaev the most effective PK in the competition, with an 88.2% success rate.

Lokomotiv Yaroslavl’s focus on youth has been a feature of its season – and the club finished with a new KHL record. In Tuesday’s playoff game at SKA, where an overtime loss ended Loko’s campaign, the average age of the team was just 23 years and 8 days. That’s the youngest ever in KHL action. The previous record was held by Metallurg Novokuznetsk, which iced a roster with an average age just one day greater. It was also comfortably ahead of the youngest team ever to contest a playoff game. Yaroslavl had set a new mark – 24.09 years – two days earlier, before bringing in Maxim Afanasyev, Grigory Denisenko, Denis Alexeyev and Pavel Kudryavtsev to push the figure even further down. Prior to this season, Lada Togliatti’s 2009 line-up managed 24.89 years against CSKA.

Loko’s young guns include Denisenko, the fourth-youngest ever to take part in the playoffs. The Panthers prospect, a first-round draft pick last summer, was still shy of his 18th birthday when he made his playoff debut last season. This season saw defenseman Daniil Misyul become the fourth youngest playoff goalscorer, the 18-year-old beaten by three Traktor prodigies – Valery Nichushkin, Evgeny Kuznetsov and the youngest of all, Rangers prospect Vitaly Kravtsov. Ilya Konovalov became the fourth youngest goalie to get a postseason shut-out. 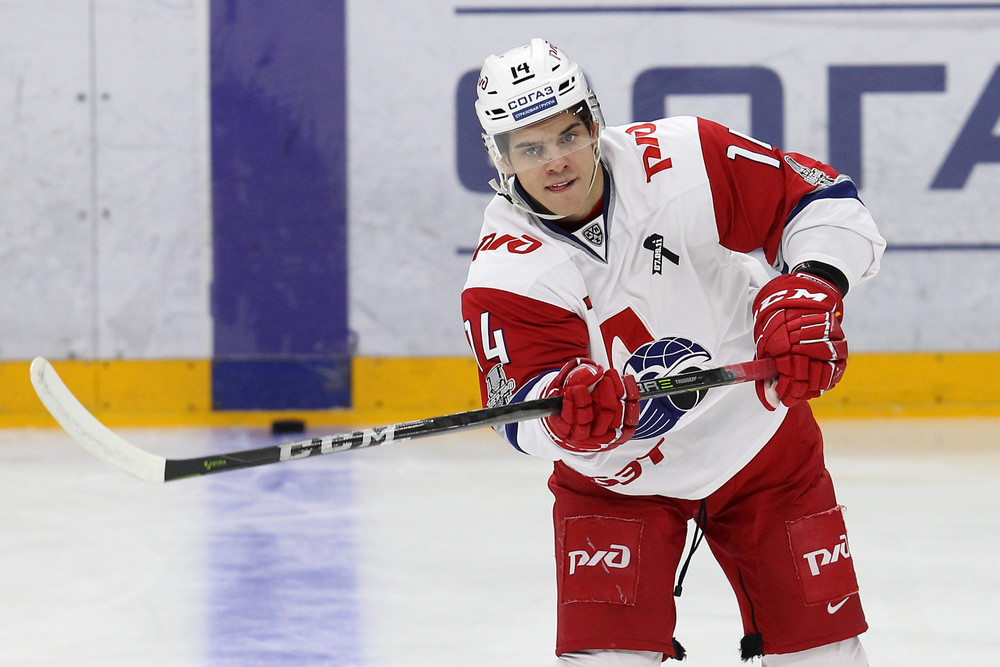