Pyotr Kochetkov: the story of his success

Pyotr Kochetkov played just two games in the KHL this season, but he’s already generated a lot of hype as one of Russia’s most talented goalies.

Over the Christmas and New Year’s holidays he guarded the pipes for the Russian team at the World Junior Championship, where he was recognized as the top goaltender of the tournament. It seems very likely that he could soon be discussed in the same distinguished light as Ilya Sorokin or Ilya Konovalov, two of Russia’s other young star tenders. The 19-year old HC Sochi goalkeeper has made a good start towards fulfilling his grand ambitions, and he hopes that his success at the World Juniors was just the start.

“As a kid, I was always sick. My mom decided to enroll me in sports to improve my health,” remembers Pyotr Kochetkov. “I started hockey at four years old, and once I got a little more serious I started going to the rink, shooting pucks at the net.”

Kochetkov got his start playing defence. His coach Andrei Vladimirovich Agapov recalls that he excelled at this position as well. “Even when he was a defenseman, he was always a leader, whether on the ice or playing football or basketball with his friends,” he says. But Pyotr always wanted to give goaltending a shot. At eight years old, he got his chance. “I was always asking the coach to look at how many other kids were playing goal, and how none of them were very good,” Kochetkov says. “After one of the losses, I got my shot at it, and I loved it. I said to my dad, ‘that’s it, I’m going to be a goalie.’”

For his parents, their son’s new ambition proved a little pricey. Even the goalkeeper himself recognizes that his mother and father helped him as much as possible, despite their difficulties. “I remember well how my dad bought me a new uniform and we had to sell a few things just to afford it,” says Pyotr. Kochetkov is also very thankful to his coach Andrei Agapov, who gave him an old jersey left over from his Penza sports academy.

“Pet’ka did it all himself,” the coach says. “I gave him the ammunition, but he trained with other goalie coaches from professional teams all by himself, where he learned what it takes.” The Penza sports academy has a right to be proud of its 1999-born stars. That group includes not only Kochetkov, but also Klim Kostin, his partner from the Russian junior team.

In 2011, Dizel Penza became the champion of the Volga region, attracting attention for many of its players from other clubs. One of these was Kostin, who headed to Dynamo Moscow’s system. Kochetkov stayed and racked up further successes in goal. “He turned away something like 90 shots a game. I can’t even remember how many times we won 1-0 or 2-0,” says Agapov with visible pleasure. “The saying is true: there are good goalies, great goalies, and then those goalies who steal games. Kochetkov was the last kind. He was always true to hockey and never turned away from it.”

Right away after leaving the sports academy, Kochetkov wanted to try his hand at the MHL. He joined Kazan, but after receiving little ice time there decided to come home to Penza. There, too, he did not immediately get the starting position for Dizel, in the VHL. “At first I would play five minutes, then ten, and eventually a whole match,” recalls Pyotr. “I started three games in that first season.”

Last season Kochetkov started with Kapitan Stupino in MHL. According to him, that season was his most trying. “We lost a lot, we even had 16 straight games without a win,” he notes. “And I was often unhappy with my own play, too. I couldn’t manage to stay positive. I got badly injured, and especially after this it was hard to have the right mindset.” 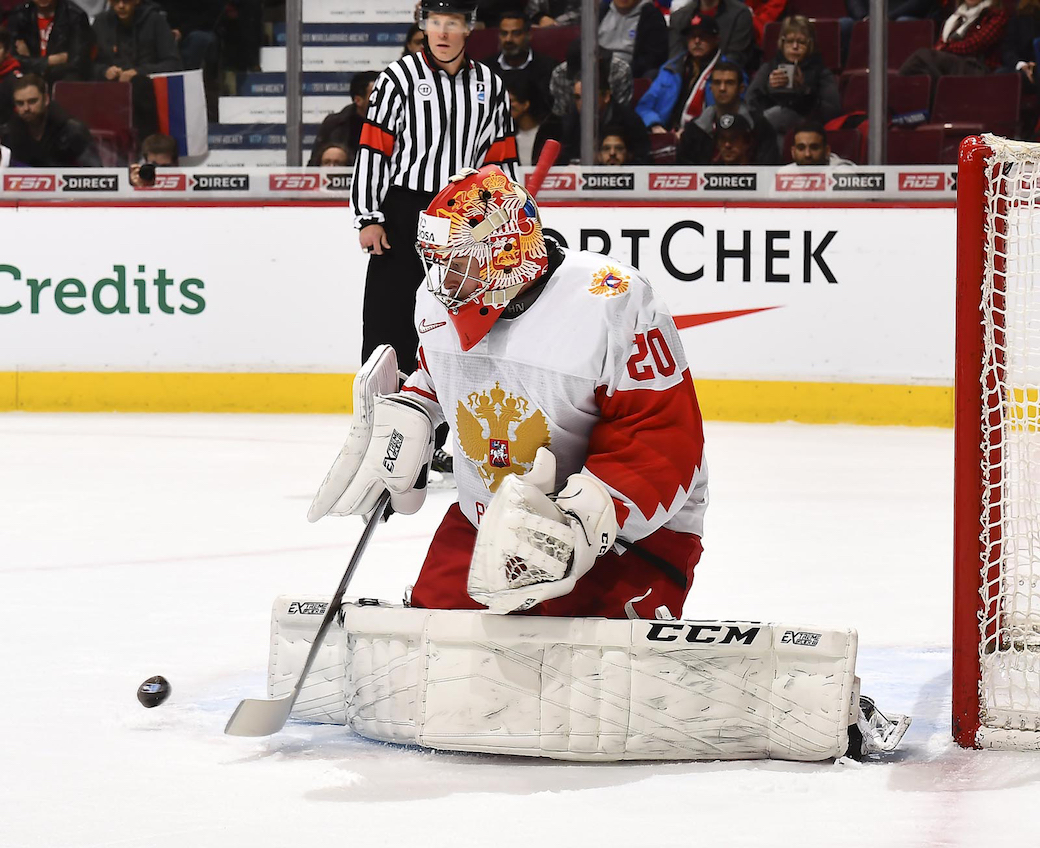 Six months ago, Kochetkov was still on crutches. At this point he probably could not have imagined that he would play in the World Junior Championship. “Thanks to HC Sochi, when things got bad, Petya got surgery,” says the goalie’s childhood coach Andrei Agapov. “Immediately after that he was already going to the arena in Penza, watching the games.” But after the season started, HC Ryazan become more and more interested in Pyotr. After a series of tryouts for the Russian junior team, the coaching staff of Valery Bragin decided to include him in the roster after all.

The starting goalie for the tournament was Daniil Tarasov, but Kochetkov got his first chance in net by the second game, when the coaches put him in against the Czechs. He stopped 24 of 25 shots for a hard-fought 2-1 win. A few days later, the Russians fell by the same score to the host team, Canada. Kochetkov was again between the pipes for that match. He won out as the team’s starting goaltender for the rest of the playoffs, where the Russian team took gold. Kochetkov himself was named the best goaltender of the tournament. 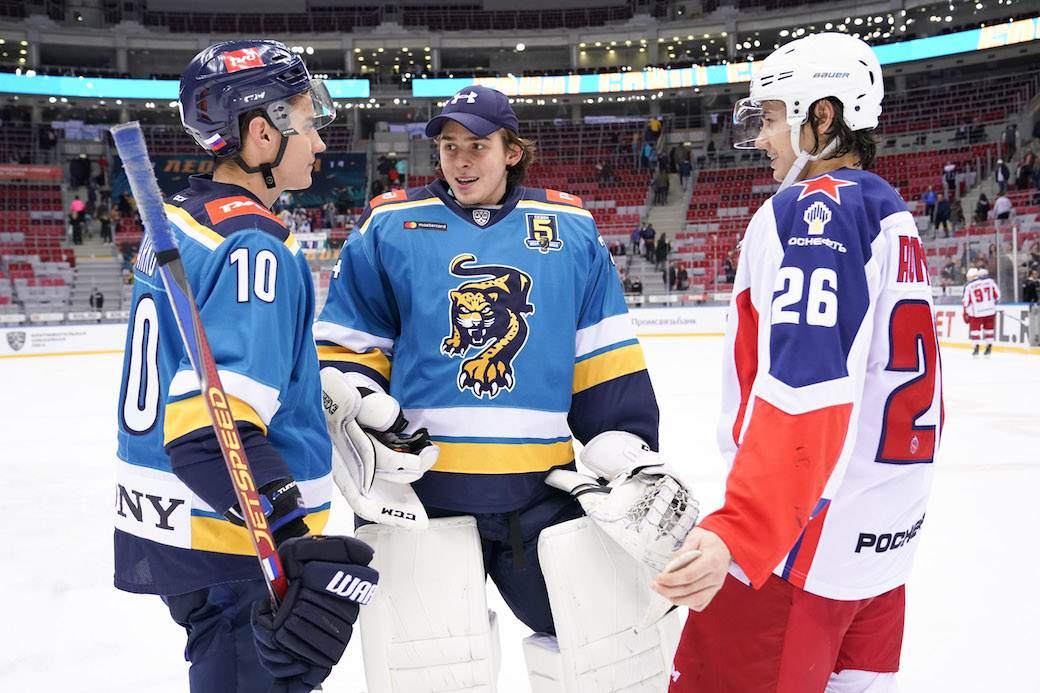 Throughout the course of the World Juniors, Kochetkov stayed in touch with HC Sochi goalie coach Jari Kaarela. After the tournament, Pyotr received a call from the team’s general manager. “We had a chat, and I told him that if I wasn’t going to get ice time in the KHL, it would be better to send me to the VHL, where I can improve,” he says.

Kochetkov has always been ambitious, and his designs only grew after his World Juniors honours. But despite his young age, the goaltender already knows the line between being ambitious, and being cocky. “I understand perfectly that HC Sochi has a difficult position in the league, they were trying to reach the playoffs and it was not the time to experiment with a young goalie. It was also the same time Konstantin Barulin returned to the lineup.”

This season, he got two opportunities with HC Sochi. The first was already in the fall, when the coaches came to him and decided to try him against Jokerit in Helsinki. “I was pretty nervous, they [Jokerit] were very good,” says Kochetkov, remembering his first game in the KHL. “The difference with junior was immediately obvious, the speed of the game was totally different. The guys here are real pros. I was already getting shelled in the first period. We lost, but I learned a lot.”

He got his second chance in January, against Neftikhimik. In that game Kochetkov allowed just one goal, but it was not enough – HC Sochi lost 2-1. “He’s a very ambitious guy,” says Andrei Agapov, recalling the match. “We called each other a few days ago and I asked him who will be the starter in game six against Lokomotiv. And he answered, ‘hopefully Pyotr Kochetkov!’ We had a good laugh.”

“I think I have to prove myself in the VHL, to show that I deserve a spot in the KHL,” concludes Kochetkov. “Goalkeeper is a special position: as a forward you can play for just a few shifts on the fourth line, but the goalie plays all 60 minutes. It’s a huge responsibility.” 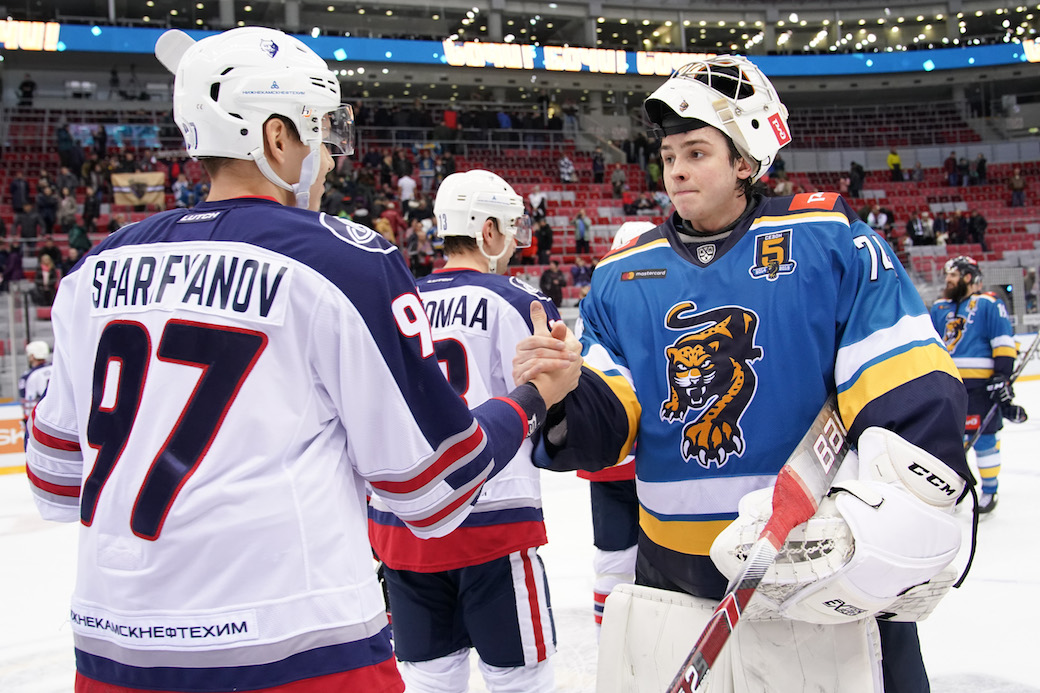