Barys ended its game seven hoodoo to see off Torpedo and progress to the second round for only the third time in the club’s history. Three previous winner-takes-all showdowns – against Metallurg in 2012, Traktor in 2013 and Avangard in 2015 – saw the Kazakhs finish on the wrong side of the scoreline. Today, though, a 3-2 verdict was enough to send Andrei Skabelka’s team through. The result means Barys will face Avangard in the Conference semi-final, while Avtomobilist takes on Salavat Yulaev.

For Torpedo, meanwhile, a second tilt at the Eastern Conference playoffs ended in the same manner as its first appearance on this side of the divide in 2014 – a first round loss in seven games.

Two goals from Darren Dietz saw Barys to victory in this deciding game of the playoff first round. The 25-year-old Canadian defenseman, who topped the club’s regular season scoring with 53 points, put his team 1-0 up in the first minute and then grabbed the game-winner with eight minutes to play as the home team edged the verdict.

Every previous game in this series had gone the way of the home team – although often after a struggle – and the Kazakhs made a perfect start here. Valery Orekhov won a face-off in the Torpedo end, the puck went back to Patrice Cormier and he teed up Dietz for a blast from the top of the circle that whistled past Barry Brust. But this series has never allowed either team to establish a firm grip on proceedings and today’s final showdown was no exception. There was almost nothing to choose between the teams as they traded opportunities at will and it was little surprise that Torpedo tied the scores before the first intermission. The goalscorer was less expected: Anton Volchenkov’s 118 KHL appearances have brought just three goals; the 37-year-old defenseman shot home here for his third of the current playoffs.

The middle frame followed a similar pattern. Both teams had plenty of chances and neither could take control of the game. Barys regained the lead when Matt Frattin intercepted a pass in center ice, evaded the visiting defense and fired past Brust. This time the advantage lasted just four minutes before Mikhail Varnakov’s unstoppable surge saw him set up Dmitry Semin, who beat Henrik Karlsson from the slot to make it 2-2.

For a time, the third period looked set to provide more of the same with the teams trading attacks. Steadily, though, Barys managed to close down Torpedo’s offense and started to dominate the game. That effort got its reward in the 52nd minute when Dietz potted his second of the game. Again, it stemmed from the home team winning the draw in enemy territory; this time, though, Dietz opted to skate with the puck rather than unleashing a shot from the point. His rush took him to the crease before he was halted. Dmitry Shevchenko kept the play alive and the puck squirted out to the back door for Dietz to shoot into an open net. Torpedo struggled to regain the initiative, even a final surge was stymied by a penalty on Philip Holm and the visitor managed just four shots on target in the final session as Barys booked its place in the next round.

It turned out to be a very interesting series; it went all the way to the third period of the final game. We couldn’t get the goal we needed at the end and lost out. Right now it’s hard to put it into words. Overall, we had a good season. It might have been even better if we had continued further. I think that everyone could see how the team battled this season, how much character it showed. Unfortunately, it wasn’t enough here.

First, I’d like to thank our fans. We had a crazy atmosphere at our home games and at the end of the season that really brought the team together with the fans. I’m delighted that the playoffs will continue here in Astana. Thanks also to our guys for the character they showed. Today’s game was tough, the whole series was tough, but we found a way to win it. 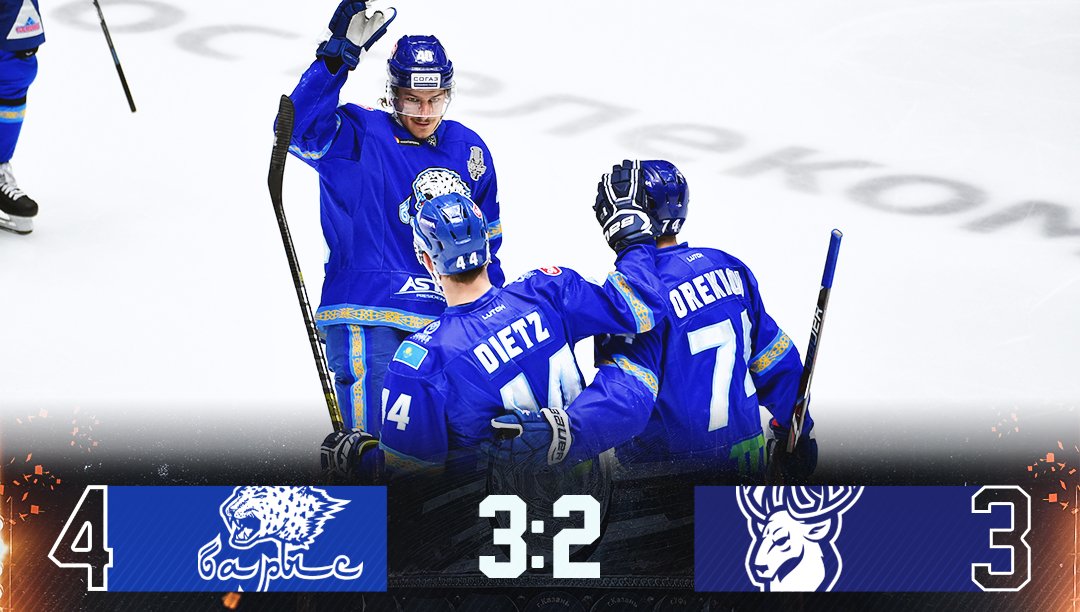