SKA recorded the first home victory of any team in this series to move ahead for the first time in this year’s playoffs. Once again, though, Spartak made life tough for the favorite before succumbing to two goals in the third period.

David Rundblad was SKA’s game winner for the second time in three days. The Swedish defenseman’s power play goal with five minutes to play secured a tight verdict over Spartak. However, the Army Men needed two power play tallies to cancel out Anton Zlobin’s second-period opener and take a 3-2 lead in the series.

The first period was played at a lively tempo, although neither side was able to create a glut of scoring opportunities. SKA’s Andrei Kuzmenko was the most likely scorer, but he was unable to find a way to goal despite a couple of promising counter-attacks.

For a time it looked like this might be Julius Hudacek’s day. The Slovak goalie not only denied the home offense until the 49th minute, he also played a big role in the opening goal of the game early in the second period. A SKA attack broke down, and Hudacek was immediately alert to the possibilities. The goalie’s long pass released Artyom Fyodorov on an odd man rush alongside Anton Zlobin, who finished off the move and gave the visitor the lead. Magnus Hellberg’s look of frustration told the story: once again, SKA was struggling to put away an opponent that most had assumed would be a formality. Zlobin almost helped Spartak to a second goal, but a second odd man rush with Ilya Talaluyev was less effective than his earlier surge.

Still the Red-and-Whites kept it tight. SKA looked to raise the tempo but struggled to really test Hudacek. The second intermission came and went, the home team’s shot count of 17 was respectable but hardly the stuff of overwhelming offensive power. However, Spartak was putting in a Herculean effort on defense. Eleven blocked shots in the second period highlighted how the visitor was keeping SKA at bay – and hinted at the possibility of the Muscovites running out of energy before the game was won.

That proved to be the case. Midway through the third period SKA tied the scores with a power play goal. Pavel Datsyuk and Nikita Gusev combined behind the goal line to set up Maxim Karpov for a one-timer in front of Hudacek’s net. Finally, the spell was broken and the scores were level. Then there was more penalty trouble for the visitor. Almost immediately, the PK was out again, successfully wiping out Alexander Osipov’s minor. All too soon, though Maxim Goncharov took his seat on the sidelines and this time SKA got the all-important goal. David Rundblad, Monday’s overtime winner, did the business once again. Nail Yakupov’s shot was blocked, Sergei Plotnikov recycled the puck and Rundblad was open at the back door to rifle home with just five seconds remaining on the penalty. Of 12 goals for SKA in this series, eight have come on the power play.

There were still five minutes of the game left and SKA played two of them with Anton Belov in the box. But Spartak’s last hurrah came to naught; the home team held on for another narrow victory and now has the chance to wrap up the series in Moscow on Friday.

It was a great playoff game. I’d like to thank the fans for the atmosphere and our guys for living up to it. We can’t rely on fortune, we need to earn it. In the build-up to their goal we spent a long time on the PK, the guys were tired. But in the end, it’s the score that counts.

A couple of games ago, [Vladislav] Gavrikov scored a power play goal from the slot, so we used him there again today.

I’d like to thank the guys for their commitment in every moment, their fight for every puck. This was a great playoff game, you could see that from the stands or from the bench. Everybody was fighting for everything. SKA had 30 shots and we blocked 19, that tells you everything about our guys. In the third period emotions took over and we paid for that. Tonight, SKA made the most of its home advantage and we’ll hope to do the same on Friday in Moscow.

Do you still have hopes of returning here for game seven?

I’ve got unfinished business in Petersburg. We hope we’ll be back. I don’t think this team is tired, the guys are in good shape. In hockey you can’t do anything without emotions, it’s just a question of using them the right way. A couple of times we’ve overdone it, but that’s far less dangerous than when there is no emotion in our game. You won’t see anyone here who doesn’t care passionately about this, and that’s absolutely normal. Even in chess, you see players kick the board over! 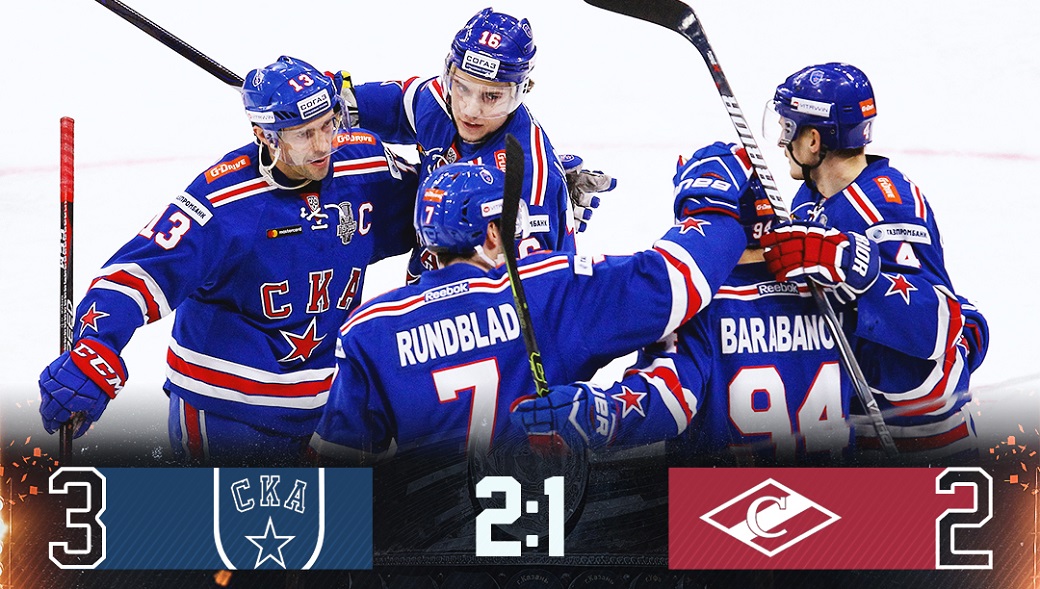