The regular season champion wrapped up a sweep of Vityaz to march into the Western Conference semi-finals. Two goals from Mikhail Grigorenko and a superb effort from Kirill Kaprizov secured a 3-1 victory in Podolsk to give the top seed a place in the next round. SKA, meanwhile, tied its series with Spartak at 2-2 – but almost fell to another late rally from the Muscovites. Two goals in the 56th minute saw Spartak claw back a two-goal deficit, but David Rundblad got the overtime winner for the visitor.

The regular season champion did what was expected and eased past Vityaz with a sweep. In truth, the Army Men were rarely troubled in this series, while Vityaz is still awaiting a victory in a KHL playoff game. Two years earlier, the Podolsk team’s previous postseason campaign ended in similar fashion against SKA.

Any hopes that the home team harbored of extending this series were swiftly dampened. CSKA took the lead in the fourth minute when Mikhail Grigorenko picked up the puck in center ice and advanced to bury a wrister from the left-hand circle. Then the forward turned provider when his pass set the stage for a moment of magic from Kirill Kaprizov. The forward was standing at the near post with his back to goal but found the time to slip the puck through his own legs before lifting it over Alexander Samonov’s shoulder. Throughout the series, that kind of individual quality has proved too much for a hard-working Vityaz team that has lacked a cutting edge; the expressions on the home bench as CSKA celebrated rather told the story.

The visitor thought it had a third marker late in the frame but Maxim Mamin’s presence on the paintwork cost his team that goal. CSKA appealed to no avail; the original verdict was upheld by the video footage. That reprieve lifted Vityaz and a strong start to the second period saw the host reduce the deficit on the power play. Pavel Chernov and Alexei Makayev exchanged some swift passes before Chernov’s shot was redirected home by Artyom Shvets-Rogovoi. Much of the remainder of the second period saw Vityaz push for an equalizer: Gennady Stolyarov might have scored off the rebound from a Borna Rendulic effort, Chernov and Denis Kokarev created a dangerous odd man rush on the penalty kill. However, Grigorenko potted his second of the game late in the frame to quash hope of a revival, flashing a shot in off the inside of the post after a Kaprizov feed from behind the net.

The third period began with an alarming incident when Anton Slepyshev cannoned into the boards head first and had to be helped to the locker room by the CSKA medical staff. That took some of the energy from the game and, one late chance for Miro Aaltonen apart, there was little sign of Vityaz unleashing a final storm on the visitor’s net. CSKA saw out the game, and the series, comfortably enough and will await a sterner challenge in next week’s Conference semi-final.

I’d like to wish CSKA further success this season. As for us, we did everything we could but it wasn’t enough to win a game. For Vityaz, this is the eighth game in our history in the KHL playoffs and we are still waiting for a first win but I think it will come soon. I think we looked a little bit better than we did two years ago. We’re gaining experience and making small steps forward.

We earned our own place in the playoffs. We had 63 points, Dinamo Riga had 62. But, like in any season, you always hope for more. Having to play CSKA wasn’t the most pleasant reward for us; in the final stages of the season, when it seemed that we would comfortably make the playoffs, something went wrong and we fluffed our lines. I wanted to finish higher up the table but at least we achieved our primary objective and got to the playoffs again.

I’d like to thank Vityaz for a good series. Although the scoreline was 4-0, these were all tough games. Vityaz was well-organized against us and we had to put a lot of effort into breaking them down. That’s why we’re so pleased to get it done in four games. The desire and dedication of the guys was clear, that’s why we overcame this opponent. We’ve made the first step, now we’re ready to go further. 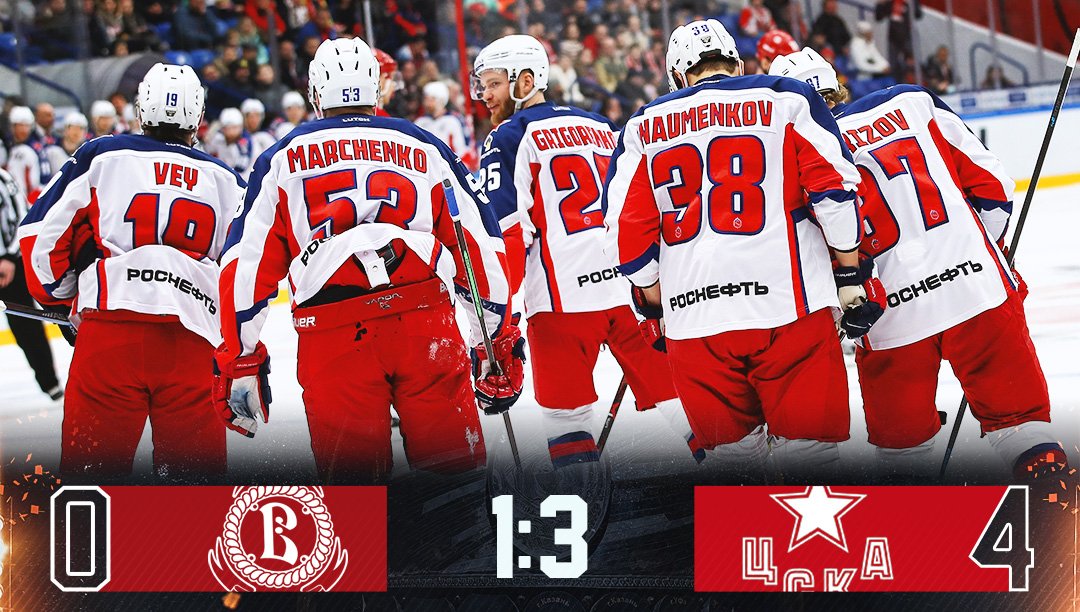 Not for the first time in this series, Spartak gave SKA an almighty fright. This time, though, the Army Men regained their composure and found a way to win after blowing a two-goal lead. David Rundblad’s overtime goal settled the issue in SKA’s favor and ties the series at 2-2.

The decisive goal came in the 65th minute, Nail Yakupov twisting and turning in the circle before feeding Rundblad on the point. The defenseman’s shot whistled under the crossbar, sparking relief for SKA and outrage for Spartak. The home team was convinced that there was an offside in the build-up to the goal; Julius Hudacek forcefully made his point to the officials while captain Dmitry Kalinin was at pains to point out his grievance. A formal challenge soon came from the home bench but, after a long look at the video, the referees ruled that the goal should stand. SKA had tied the series with two victories on road, cancelling out its two shock losses at home.

Spartak went into the game without Kaspars Daugavins, following his injury in the previous encounter. The Latvian forward was released from hospital yesterday with little worse than fractured ribs; encouraging news after his alarming headlong slide into the boards under a challenge from Igor Shestyorkin. The SKA goalie was suspended for this game, meaning young Alexei Melnichuk was named as Magnus Hellberg’s understudy for the evening.

The visitor had the better of the opening frame without carving out too many dangerous moments in front of Hudacek’s net. It wasn’t until the second period that SKA got in front, with Yakupov firing home a one-timer from close range after Maxim Karpov’s pass from behind the net. Spartak’s best chance of a swift response fell to Martins Karsums, but he failed with a one-on-one break.

In the third period, a double minor for Viktor Tikhonov offered Spartak a route back into the game, but the home team failed to capitalize. Then a power play for SKA enable to Vasily Tokranov to show how it should be done, smashing home a point shot after just 14 seconds of the numerical advantage.

Spartak, though, has shown repeatedly that it will not back down in this series. And, once again, it had a surprise in store for the favorite. With less than five minutes to go, the host got a goal back through Evgeny Kulik, who scored just eight seconds into a power play. Inspired, Spartak tied the scores 21 seconds later; Karsums again combined with Ilya Zubov and this time Enver Lisin was the beneficiary. In game two, a similar scoring sequence ended with the Red-and-Whites snatching a last-gasp victory but today there was no repeat. SKA took the game into overtime and Rundblad delivered the decisive blow.

I’m grateful to our guys for their character and commitment. They showed up, they didn’t throw up their hands. This series is very much still alive. It’s clear that both teams are doing better on the road. Let’s see what happens next. I’d like to say a big thank you to our fans for the terrific atmosphere at these games.

Now we’re in a best-of-three series and we’ll be ready for that. As for the way we ended in regulation, we’ll be working on that.