On November 12, 2018, for the first time in the KHL history, a player born in the 21st century hit the ice. It is highly symbolical that this player is Vasily Podkolzin – one of the most promising players of his generation. KHL.ru reached Podkolzin and his first coach Ivan Dekin to talk about his KHL debut, his past, and his future.

You’re just 17 years old, sitting on the SKA’s bench during a home game against the League’s leader and the coach says: “Get ready! You’re going with Gusev and Datsyuk!” Probably, many young players dream about such a phrase, but for Vasily Podkolzin it became true. After a few seconds he jumped over the boards, and for the first time, he hit the ice in the KHL.

“At first I’ve been told that I’ll be the 13th forward. Something like, go there, watch, and learn,” Vasily Podkolzin remembers his debut. ‘I spent two periods on the bench; I was quite cold. Then Ilya Vorobyov speaks out loud the next line: Gusev – Datsyuk – Podkolzin. It was quite a shock, so I say Nikita: ‘Gus, my legs are shaking, I can’t do it.’ He suggested me to breathe out, and I started playing better.” The 17-year-old forward recognized that he was long filled with emotions after the game, getting some sleep only the next morning.

Vasily got on skates for the first time when he was four, and he started playing hockey pretty much right away. Thankfully in Maryino, Moscow district, where he was born, a closed rink was available. “My family loves hockey,” Podkolzin says. “My grandpa played for Khimik Voskresensk, my father also is a huge hockey fan and plays in the local amateur league.”

Quite fast, Podkolzin became the top forward in his team, but it didn’t have a significant impact on the team’s results. “We played in the Moscow Championship against the White Bears and lost 4-26”, the young SKA forward recalls. “That time, I scored all my team’s four goals. Naturally, I started hating the White Bears. I couldn’t handle such a score. A few days later, my mother gets in my room and tells me: ‘Vasya, we can move you to the White Bears. What do you think?’ I was shocked: ‘Mama, I told you that I hate them!’”

Of course, it was just children’s resentments, and a few hours later the then-8-year-old Podkolzin was already getting ready for his first practice with his new team.

There was only one detail, and not the least important: The White Bears’ facilities are in Khovrino, North-West Moscow, not far from the Moscow Ring Road. It’s hard to find two farther points in the Russian capital but going from one end of Moscow to another didn’t scare the young Vasily.

“At about 2 p.m. I finished my classes, so I would just run home to take my bag, and my parents or my grandma got me to the practices,” Podkolzin tells. “It was about one hour by metro and another twenty minutes on a bus. On my way, I used to study. You can hardly write anything, so I either read or did some gross work to copy it at home on my notebook.”

Podkolzin’s schedule resembled a bit the Groundhog Day movie. He had five practices a week and Moscow Championship games on the weekend. And it was like that until he finished his hockey school last summer.

“Vasily is one of the few modern guys who you don’t need to push or to motivate: he loves hockey and is incredibly desirous of developing even further,” says Igor Dekin, one of Podkolzin’s youth coaches. “My belief is that talent is just 10-15% of success, the rest is hard work. Believe me, in these years I had many guys with more talent than Vasily. Maybe he’s not as coordinated as Andrei Kuzmenko is, but he has another style, he always had a powerful stroke. Some compare him to Valery Nichushkin, but Valery crashes the net from the side, Vasily always tries to play in the middle.” 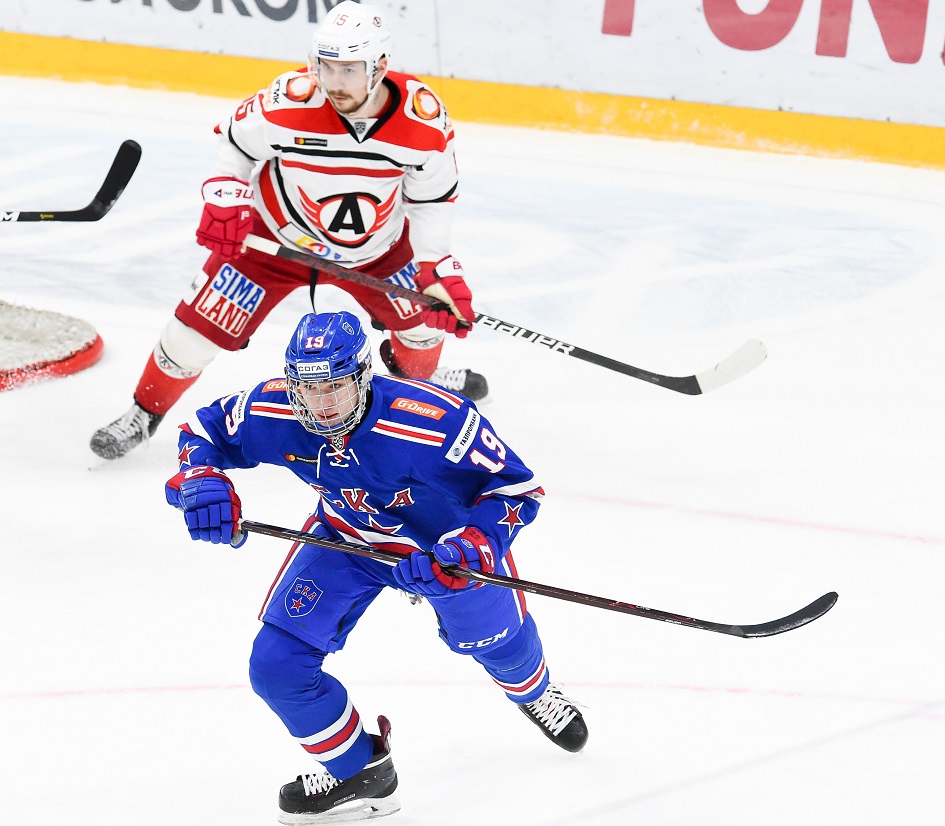 Vasily Podkolzin’s name started thundering a bit earlier than his first game in the KHL. In August, during the Hlinka Gretzky Cup semifinals, at two minutes to the final horn with Russian down by one goal to Sweden, Podkolzin picked up the puck in the defensive zone, run through the whole rink, undressed two defensemen and scored a memorable goal. He repeated his trick the next day in the bronze medal game against Team USA.

“Vasily loved scoring these goals when he was younger as well,” Dekin remembers. “I remember that once we were playing against Rus’. A difficult game, we were tied at zero and had to play three-on-five hockey. Podkolzin picked up the puck, run through the rink even though we were down two men, scored, and we won the game 1-0. But that was in kids’ hockey, not an international competition against the best players in the world in your birth year.”

Vasily himself says that at that moment he remembered his exploits of the kids’ hockey times and decided to save the team. However, in his early years, he was often scolded because of these attempts, asking him to share the puck more. At the Hlinka Gretzky Cup, Podkolzin was the top scorer in the tournament with 11 (8+3) points and captained Team Russia to a bronze medal.

“In 2014 I moved from the White Bears to Vityaz, bringing some players with me,” Dekin goes on. “Of course, Vasily was in the first line. He already was a leader. But only on the ice, not in the locker room. But in his last year of school hockey, he grew up a lot and became wiser. It happened that after my speech in the locker room he would ask me to leave to have a short speech himself.”

Podkolzin has now a chance to play at the World Juniors this season. Team Russia head coach Valeri Bragin traditionally prefers icing the most experienced players available, but he is also never scared to call up the exceptionally talented guys, no matter their age. In November, Podkolzin lined up for Team Russia U20 at the Four Nations tournament. 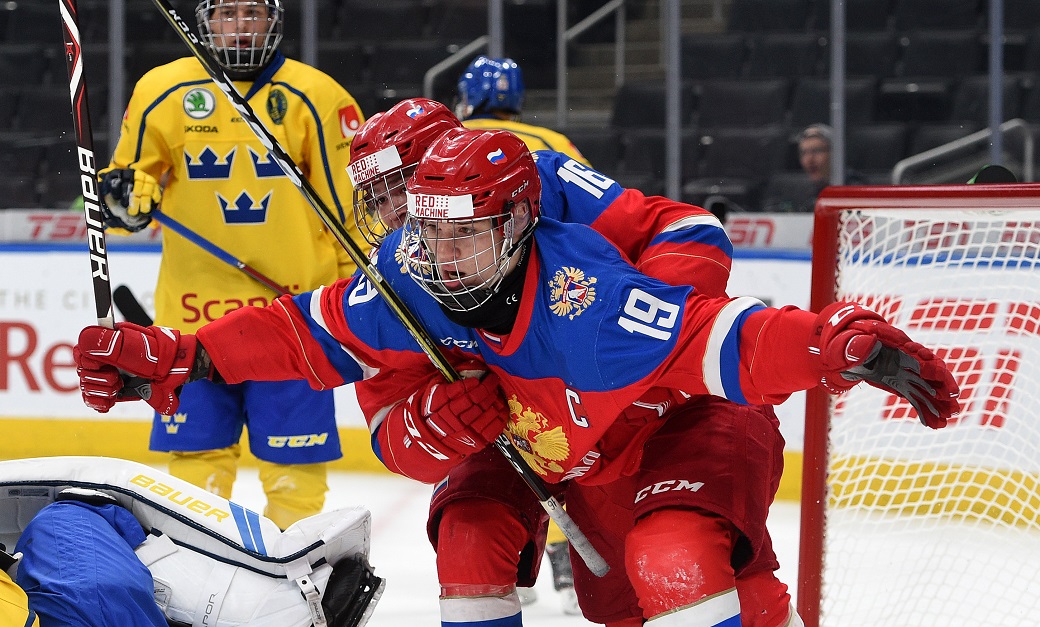 Podkolzin didn’t play a single game for Vityaz, and before the Hlinka Gretzky Cup, he moved to SKA. Even if he had many offers from North America, he decided to keep playing at home.

“In his last year in kids’ hockey, Podkolzin was often called to Canada and the USA, but I advised him to stay in Russia,” Dekin says. “There are way too many examples of good players who move there at 16-17 and then get lost. At home, it’ll be easier for Vasily: His family is close, and the coaches talk his language.”

Vasily agreed with his coach and accepted to stay in Russia. He considered all the pros and cons and decided that it would have been hard to adapt to an entirely new world and culture.

His possible move to SKA gave him much to think. However, he couldn’t miss the opportunity to take advantage of a great chance to improve within a structured and well-working system. Podkolzin has an opportunity to play with three different teams: SKA in the KHL, SKA-Neva in the VHL, and SKA-1946 in the JHL. In just a few months at his new team, Vasily managed to play in all leagues. 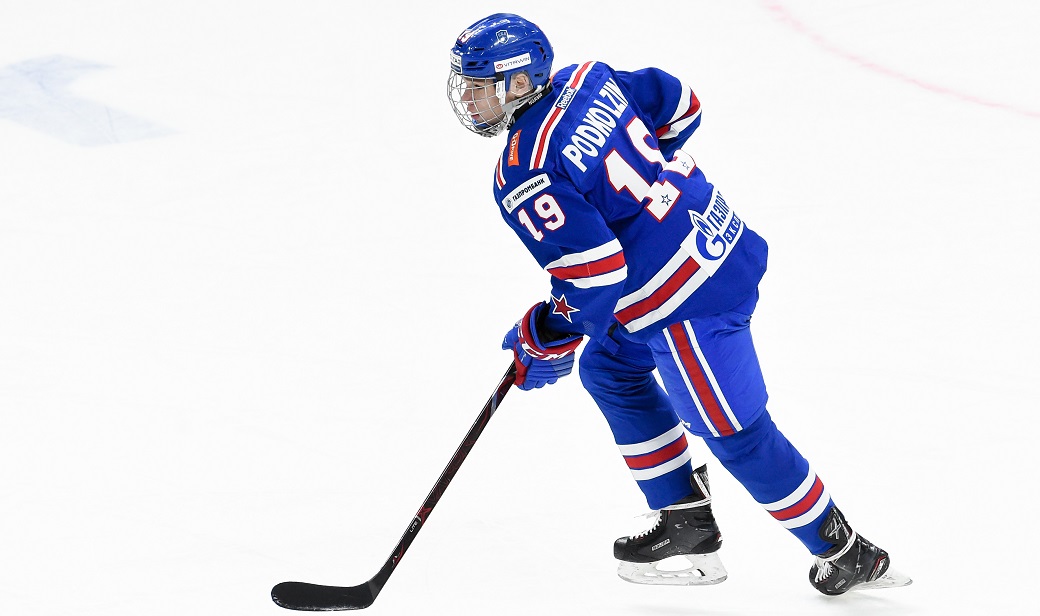 One goal in six VHL games and five in ten JHL games are a great start. But after his debut game in the KHL, his intentions became even more explicit.

“My first game for SKA gave me wings,” Vasily shares his experience. “I want to play even more, but for that, I have to work even harder in practices.”

Right after the game, Podkolzin’s telephone exploded: He got calls and messages from any possible number.

“I got calls from pretty much all the guys who played with me with the 2001-born team,” Podkolzin says with a big smile. “We’re still good friends and follow each other.”

Oddly enough, he passed his hockey exam before the school one, as he will sustain his Unified State Exam just next year. Podkolzin didn’t stop thinking about his future, quite the opposite, he keeps on thinking about it: “My goal is to study at the Lesgaft University of Physical Education to become a coach.”