SKA hit back in game two of the Western Conference Final, blanking CSKA to claim a 2-0 victory and square the series before the teams head to Moscow on Monday. Mikko Koskinen made 25 saves for his fourth shut-out of this year’s playoffs, while Nikita Gusev and Jarno Koskiranta got the goals in the second period.

After missing out in a tight opening game, SKA was eager to assert itself from the start here. Oleg Znarok’s team was playing a characteristically ‘in-yer-face’ brand of hockey, and in the opening frame it had 12 hits against just two from CSKA. The all-action approach was not enough to generate many clear-cut chances, though, and the period ended goalless.

That all changed 40 seconds into the second stanza as SKA hit the front. Vadim Shipachyov, recalled to the team after missing game one of this series, was the architect. First, he leapt to catch the puck on the blue line as CSKA attempted to clear its lines. Next, a swift pass found Gusev in the left-hand circle. Gusev’s instant shot gave Ilya Sorokin no chance as he tried to slide into position and SKA had the lead. CSKA came close to an instant reply through Roman Lyubimov after Pavel Karnaukhov battled his way forward, but then failed to capitalize on a power play and the momentum moved back towards the home team. 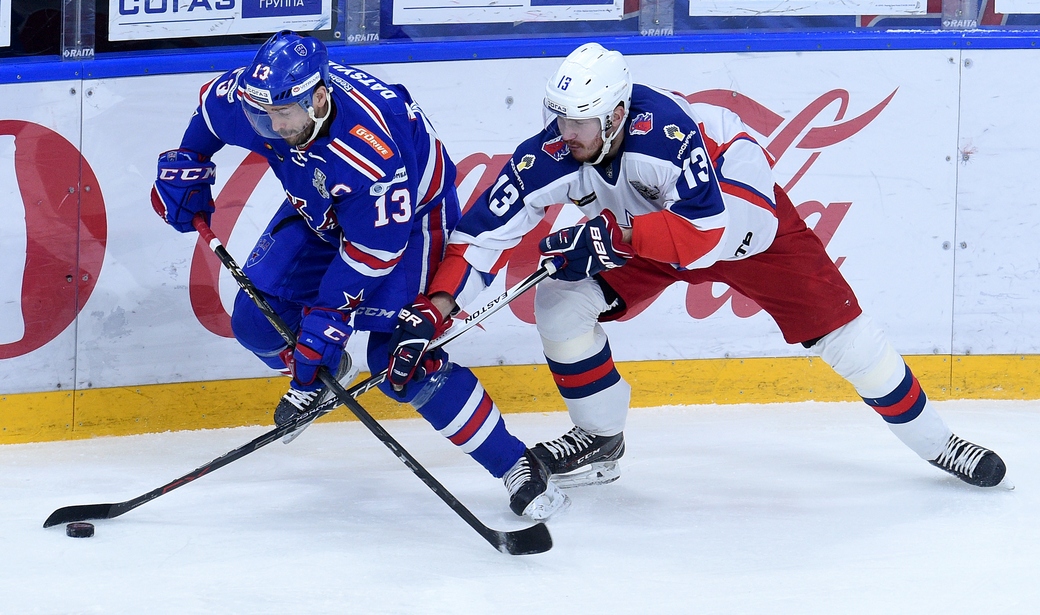 Koskiranta added a second as the game passed the midway point, slotting a neat finish past Sorokin after Ilya Kablukov’s rush down the left wing. There was a query about SKA’s line change as Kablukov streaked past the benches, but the video showed no infringement and the goal stood. That did not prevent a skirmish between Karnaukhov and Sergei Plotnikov, which resulted in both players going to the box and started a trend for niggly clashes all over the ice. Karnaukhov got into trouble again, picking up a double minor for a tussle with Koskiranta and an extra two minutes for boarding. SKA twice went close on the power play, with Shipachyov threatening twice in quick succession. Then two more men went into the box after Patrick Thoresen and Mikhail Pashnin had a heated exchange of their own.

The third period began with CSKA eager to up the pace. The visitor fired in a flurry of shots at the Mikko Koskinen’s net, with Kirill Kaprizov’s pace causing problems for the home defense. But SKA held strong, and an impressive PK after Gusev went to the box highlighted the battling qualities of this performance. Kaprizov continued to threaten, Kirill Petrov managed to dislodge Koskinen’s helmet without disturbing the Finn’s net. Increasingly, though, SKA’s defense was closing the game out, making it harder and harder for CSKA to get good looks at Koskinen’s net and allowing the clock to tick down. Even a final 6-on-5 surge from the visitor failed to generate a meaningful effort on goal as the defending champion tied up the series in solid style.