The clash of the titans in the Western Conference got off to a flying start with a game that delivered all the excitement promised by this showdown. And, to wrap up an absorbing start to this much-anticipated series, we finished with an overtime winner from Andrei Kuzmenko. The CSKA forward completed his hat-trick in the extras, a performance reminiscent of Denis Mosalyov’s triple show for Dynamo at this stage in 2012; the Blue-and-Whites won that game 5-4 in overtime, and went on to lift their first Gagarin Cup. CSKA would be thrilled if history repeated itself and the big prize returned to Moscow draped in red and blue colors this year.

Even before the puck was dropped, there was a surprise. SKA’s Vadim Shipachyov, who already has nine points in this year’s playoffs, was a healthy scratch. The forward might be feeling a sense of deja vu – he suffered the same fate in Korea during Russia’s Olympic run – but this was a tactical switch that some reporters had anticipated before the series began.

But that tactical plan was confounded by Kuzmenko, whose triple strike handed CSKA the first victory of the series. His winner came six minutes into the extras, with CSKA dominating play in overtime. The forward took Bogdan Kiselevich’s pass behind the net and emerged on the wraparound. It seemed that he would look for a pass to the slot, where Andrei Svetlakov was jockeying for position, but instead he used the wrestling match between his team-mate and Nikolai Prokhorkin as a screen to shoot past Mikko Koskinen and win the game. 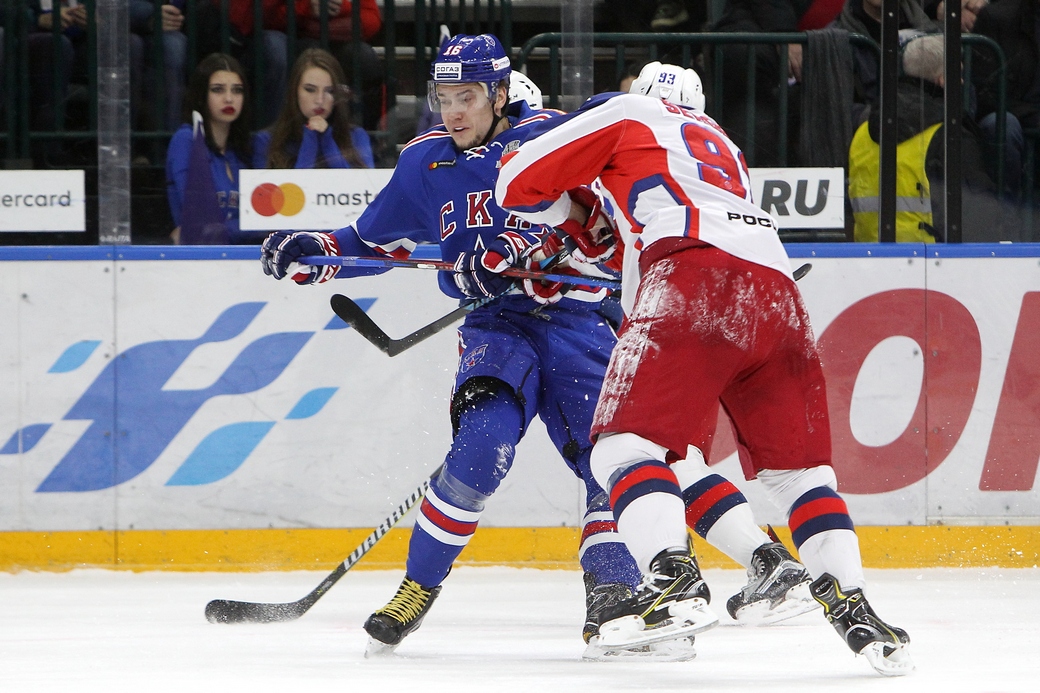 CSKA deserved the victory, even though SKA did not seem to be missing Shipachyov early on. A bright start from the home team was rewarded with an opening goal for Pavel Datsyuk in the seventh minute. Nikita Gusev’s diagonal feed from the point picked out Artyom Zub and the defenseman looked to slide a pass across the slot to Sergei Plotnikov. The feed never got there; CSKA’s defense pushed it away, but only as far as Datsyuk, lurking between the hash marks to tuck away the first goal of the series.

The home team was playing ‘in-yer-face’ hockey, unafraid of piling in with the hits against CSKA, and that kept the visitor away from a tying goal in the first period. But, seconds after the intermission, Mikhail Grigorenko made it 1-1. Kirill Kaprizov was the architect, with a sublime piece of skill to advance to the goal line before slipping a no-look pass back between his legs for Grigorenko to beat Koskinen. Now we had a game, and a series, to savor.

SKA isn’t a team used to struggling on home ice, and the silence was profound after 25 minutes when CSKA went in front. There was a nasty hole in the home defense as the Muscovites quickly sprang from their own zone, and Kuzmenko took advantage to speed down the left and get close to the net for the 2-1 goal. The lead was shortlived, however: Prokhorkin, once a star prospect at CSKA, needed just 12 seconds to tie the game with a close-range finish after Alexander Barabanov’s rush stretched the visitor’s defense to breaking point.

CSKA, though, was a much stronger proposition in the middle frame – that hit counter was swinging into the visitor’s favor and the chances kept coming in front of Koskinen. Kaprizov got involved again, going behind the net to fashion an opening for Alexander Popov, and CSKA led for a second time as the game approached its halfway point. However, a power play chance for SKA saw Gusev tie the scores before the second intermission: Vyacheslav Voynov’s shot was saved, Gusev got on the rebound and slotted the puck home from a tight angle.

Into the third period, and SKA looked to raise its game on offense in a bid to finish things off as quickly as possible. CSKA, meanwhile, had other ideas: despite absorbing more pressure than earlier in the game, it still found a way to get back ahead. Svetlakov’s leap to catch a puck on its way out of the zone kept SKA on the back foot; his shot from the blue line was deflected past Koskinen as Kuzmenko claimed his second goal of the game with 10 minutes left.

That wasn’t enough to win it, though. Plotnikov hit back almost immediately for SKA. Once again, Artyom Zub picked up an assist, this time with a thunderous shot that was pushed away for Plotnikov to tie the game at 4-4 and set up overtime before Kuzmenko could celebrate victory.