The lure of the Olympics is still attracting players to the KHL, with experienced NHL forward Pierre-Alexandre Parenteau one of the latest to head to Russia. He gave KHL.ru an exclusive interview about his move to Yekaterinburg. Before Korea, though, there’s the league’s first ever outdoor game coming up this week when Jokerit hosts SKA on Saturday. And it’s not long until the All-Star action goes to Astana in January, with voting already underway for the fans’ choice of players. Two big names could also be back in action this week: Danis Zaripov is available after a successful appeal against his two-year doping suspension, while Patrick Thoresen is expected to return to SKA until the end of the season.

After a successful appeal to the Court of Arbitration for Sport, Russian international and four-time Gagarin Cup winner Danis Zaripov saw his suspension for doping violations reduced from two years to six months. The reduced ban made him eligible to return to the ice on November 23, and the forward quickly returned to Ak Bars, where he had signed a contract in the summer after leaving Metallurg Magnitogorsk.

Zaripov could make his Ak Bars debut this week when the Eastern Conference leader entertains Salavat Yulaev on Wednesday and Neftekhimik on Saturday. 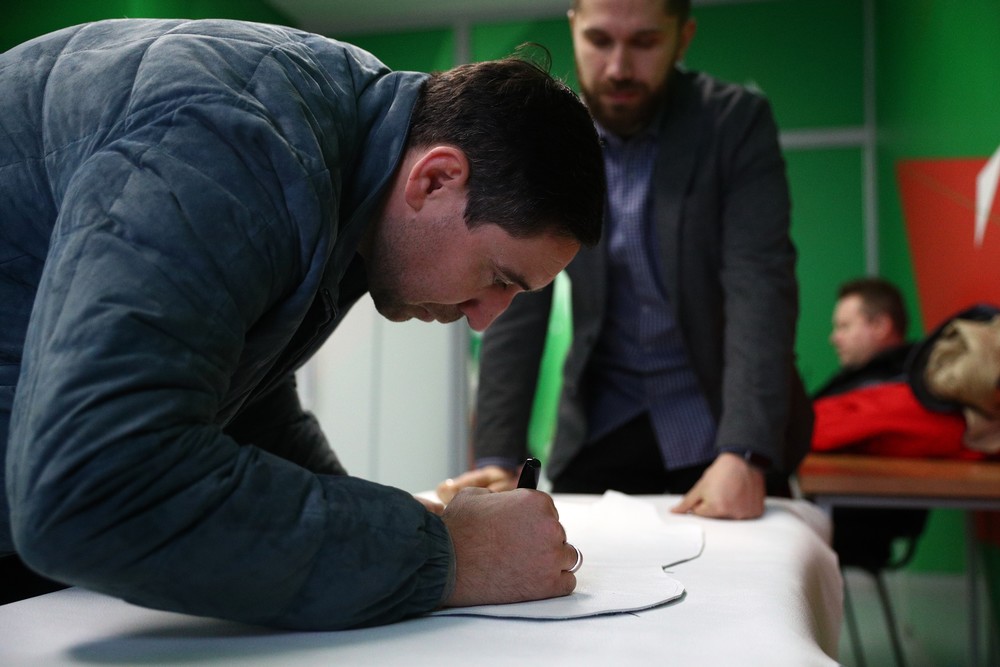 Thoresen heads back to SKA

Patrick Thoresen, one of the KHL’s most successful imports of all time, is reportedly on his way back to SKA until the end of the season. The Norwegian forward, who won Gagarin Cups with SKA and Salavat Yulaev, was the leading scorer among imports with 365 (144+221) points, until he was overtaken last season by Barys duo Brandon Bochenski and Nigel Dawes.

Now, two years after leaving St. Petersburg, the 34-year-old is expected to be officially unveiled at SKA in the coming week. Swapping his home-town team, Storhamar, for the KHL means a boost for his prospects in his third trip to the Olympics, but also means a battle to get into a loaded roster at the Gagarin Cup holder.

“I know that, even without me, SKA looks like a really, really strong team,” he told Russian newspaper Sport Express. “But I’m not just coming to sit on the bench, I want to fight for a place on the team. I’m ready to do everything needed, to help us win the cup. I understand perfectly well that I’ll have to prove my worth to the coaching staff, and I’m entirely confident that I can do it.” 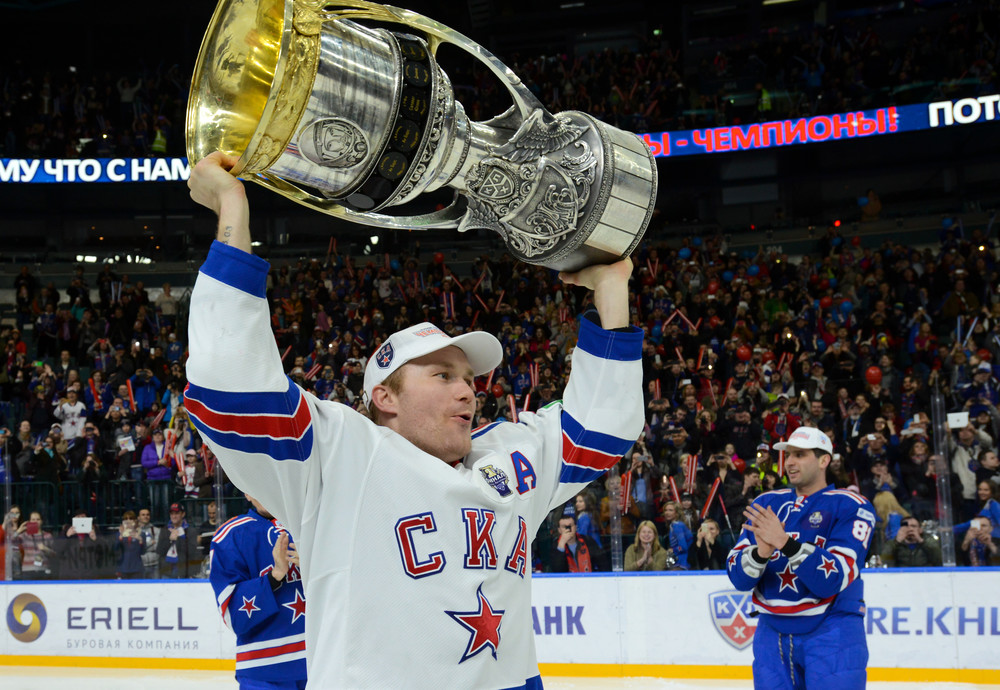 Pierre-Alexandre Parenteau, veteran of eight NHL teams and more than 500 games in the big league, is one of many players who opted for the KHL this season in the hope of booking a trip to the Olympics. He arrived at Avtomobilist in November, marked his debut with a goal (albeit, a streaky one) and is set to join up with Team Canada at December’s Spengler Cup. International play, for the first time since the 2003 World Juniors, is a big deal for the 34-year-old.

“I want to play in the Olympics,” he told KHL.ru. “I’m not going to lie, that’s the main reason I came overseas. At the same time, the KHL is a good league and I am excited to be part of this team.”

Parenteau: The KHL is my route to the Olympics 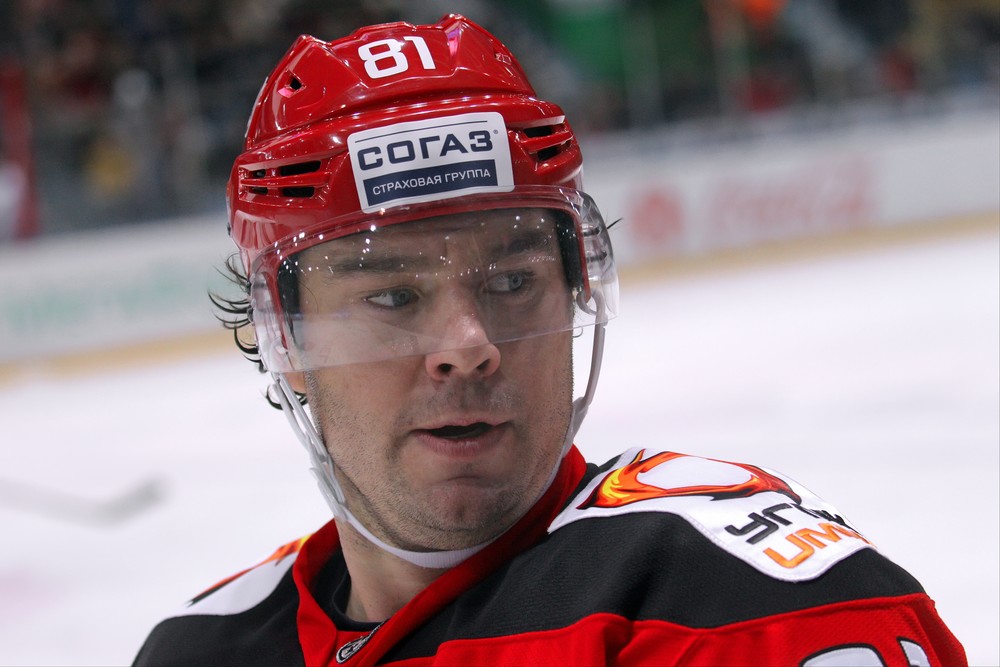 A Winter classic in Helsinki

This season is a double celebration for Jokerit. As well as marking the 10th season of the KHL, the Finns are also celebrating 50 years of the Helsinki club. One of the highlights of that party is set for Saturday, Dec. 2, when Jokerit and SKA will meet in the open air for a festive special.

It’s the first time a KHL game will be played outside, but for SKA’s Pavel Datsyuk the game evokes memories of NHL spectaculars and childhood scrimmages. “In the NHL, I think the atmosphere was the most memorable part,” he told KHL.ru. “There were so many fans in the stands, it was a great feeling playing in front of 40,000 in one game and 100,000 in the other.”

And those childhood games? Well, that was a little different. “If you played street hockey as a kid, you probably remember the biting cold, the icy winds from all directions and the snow falling. But in that kind of atmosphere, you just have to enjoy it while it lasts, because games like this are few and far between and they linger in the memory.”

Datsyuk: "Open-air hockey is a trip back to childhood."

It’s not long until the KHL Week of Hockey Stars hits Astana with one of the biggest shows of the season. But, before that, fans can vote for the players they want to see in the main event. As with last year’s competition, each of the four KHL Divisions will be represented, and as always, the fans have their say on their favorites.

To place your vote – up to two D-men and two forwards from each division – click here and log in where prompted. You can quickly and easily access the poll by logging in with your Facebook or Twitter profile, or via the popular Russian social networks vKontakte and Odnoklassniki. The polls are open until December 1, and the teams will be officially announced on Dec. 12. 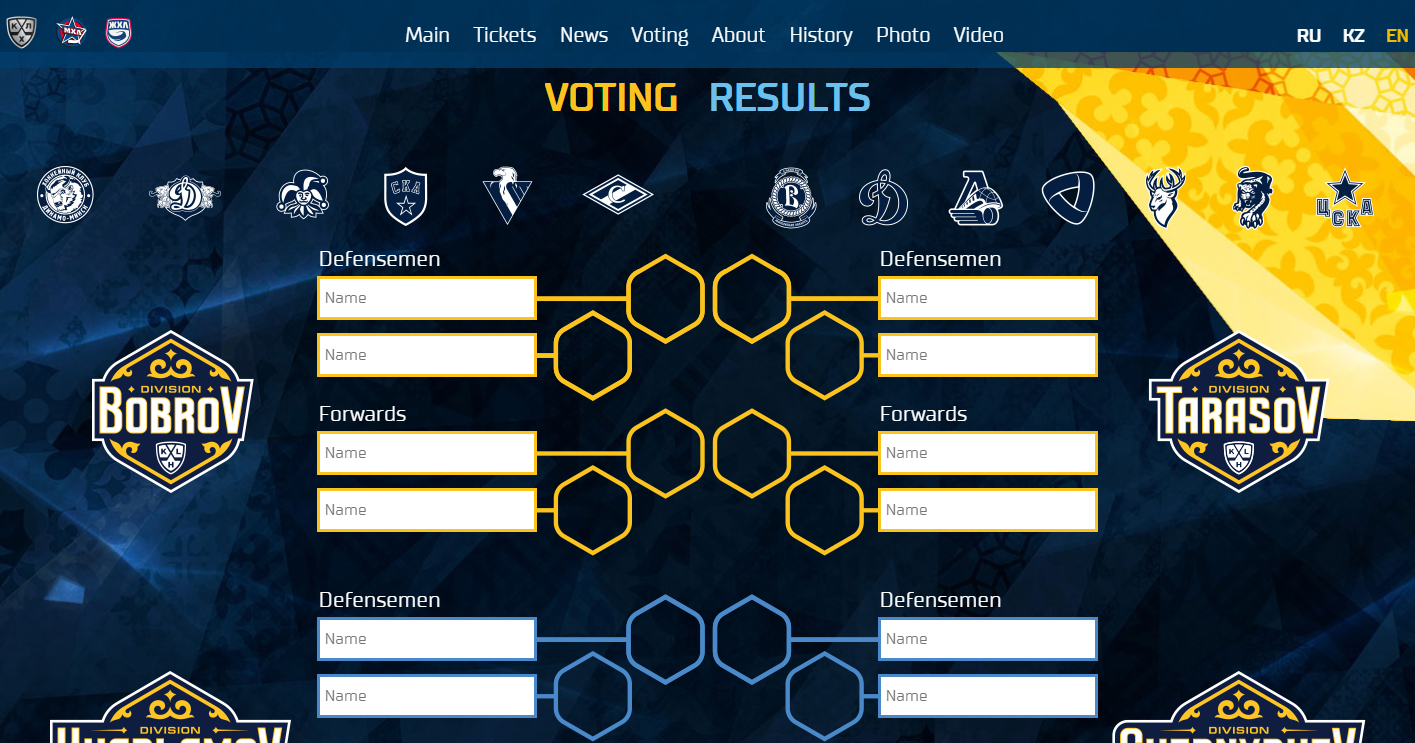 Team West announced a change in their coaching staff ahead of JHL Challenge Cup in Astana, Kazakhstan. In lieu of Sergei Oreshkin, Mikhail Milyokhin will be assisted by Loko Yaroslavl head-coach Dmitry Krasotkin.

Due to coaching change in MHC Dinamo St. Petersburg, Junior Hockey League consulted with top coaches of the Western Conference and decided to name Loko Yaroslavl head-coach Dmitry Krasotkin as assistant coach of Team West at the 2018 JHL Challenge Cup.

MHC Spartak Moscow beat Chayka Nizhny Novgorod in a hard-fought game. With this 4-2 win Spartak climb on top of the Western Conference. 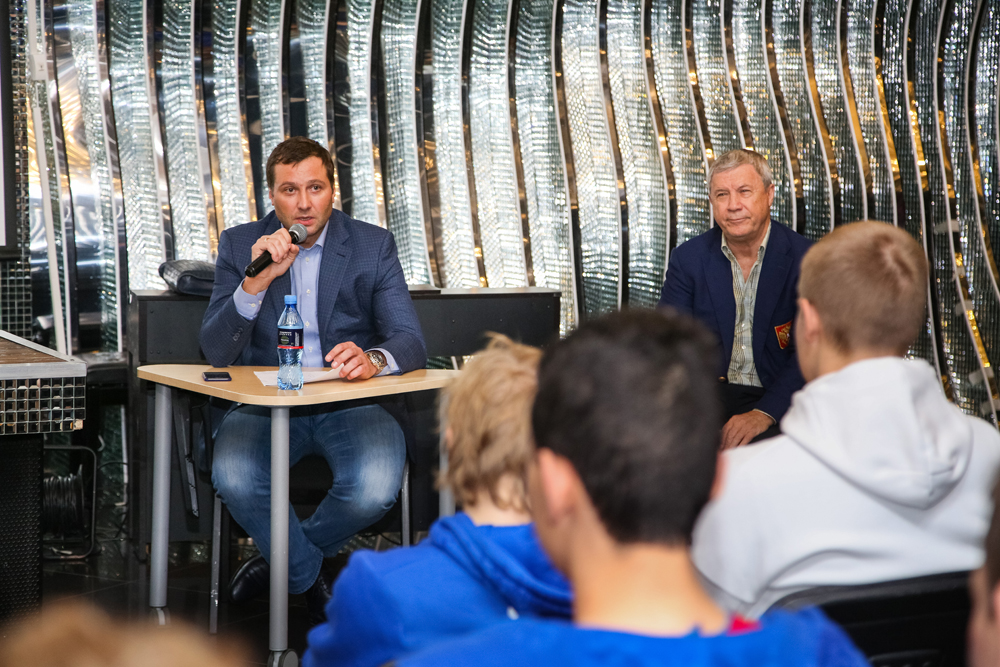 Six more games took place in the Women's Hockey League over the past seven days, and not all the results went the way the pundits might have predicted.

In Krasnoyarsk, Biryusa welcomed Dynamo Saint Petersburg, who were playing their last matches of 2017, but the hosts were not in a hospitable mood. The Siberian team won both matches by a 2-1 score, although they needed a shootout to edge the first encounter.

In Ufa, the current leader, Agidel, played host to Arctic University. The first match was a resounding 6-1 win for the home team and favorite, but in the second encounter the visitor raced to a shock 3-1 lead. Home nerves were soothed, however, in a blistering 10-minute spell in which Ufa captain Olga Sosina hit a hat-trick to seal a thrilling victory.

In Nizhny Novgorod, Skif took on the reigning champion, Tornado of Moscow Region. The visitors took the spoils in the first match with a 3-1 triumph, but Skif showed admirable spirit in the rematch, exacting sweet revenge with a 3-1 win.

Following her captain's performance, Agidel's Olga Sosina leads the League in both goals and points, with her account now showing 23 (8+15), and her team tops the standings with 26 points. In second place, 5 points adrift of the Ufa women, is Skif on 21, three points ahead of third-placed Biryusa on 18, while Dynamo Saint Petersburg clings to fourth place with 17. 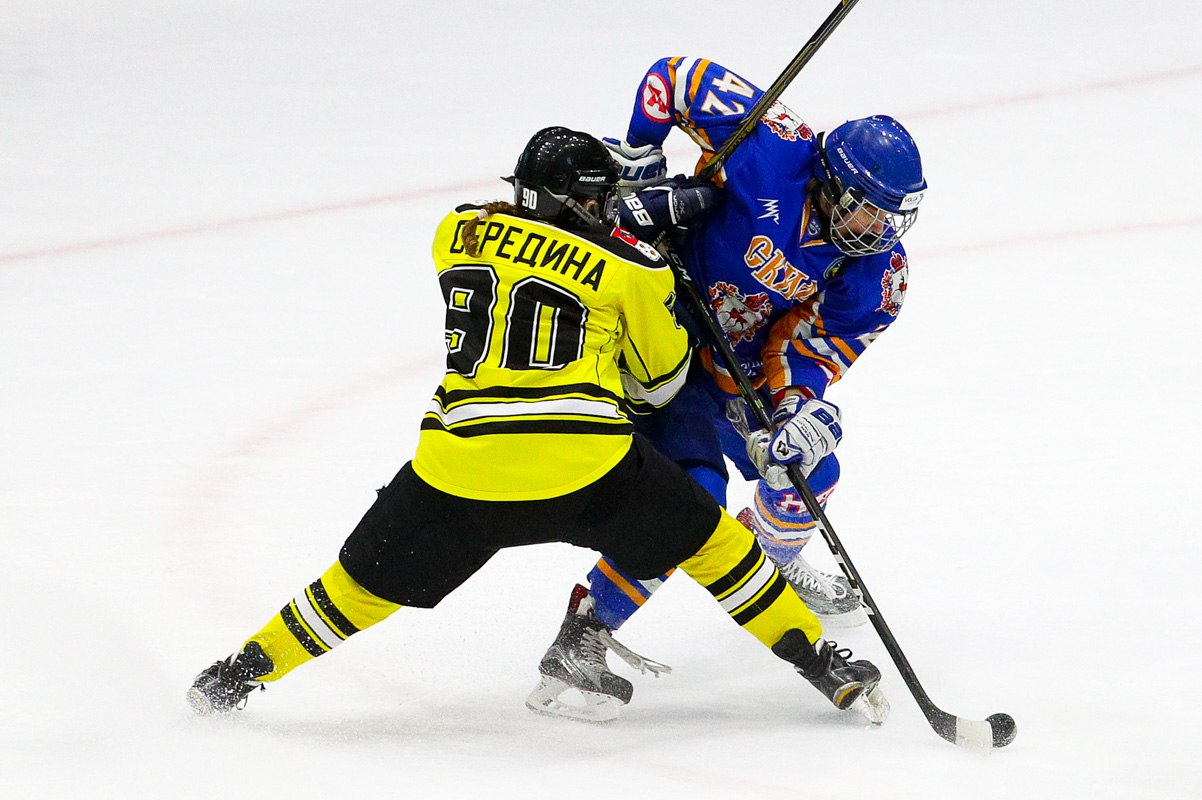