Vyacheslav Bykov returned to the KHL – and picked up where he left off by winning the Gagarin Cup. The former Salavat Yulaev supremo took SKA to its first ever championship and became the first man to win the cup with two different teams. CSKA also got back on the trophy trail: after topping the regular season table, the Army Men were announced as Champions of Russia – the first title for the club since the fall of the USSR.

Clowns to the north of me, leopards to the south …

Two new teams joined the KHL, and a third made a welcome comeback for the 2014-15 campaign. In the north, Jokerit Helsinki, the jokers of the Finnish league, switched to Europe’s biggest competition. Under the guidance of Erkka Westerlund, Finland’s double Olympic medal-winning coach, the club had high hopes of rivalling Lev’s achievement of the previous season and putting a foreign name among the Russian contenders for the big prize.

On the Black Sea coast, HC Sochi adopted a leopard as the club symbol and moved into the Olympic complex. With ex-CSKA man Vyacheslav Butsayev at the helm, this expansion franchise brought the game to a region of Russia that had never before enjoyed top-level hockey.

Finally, Lada Togliatti came back to the league in a new arena. The club – famously the first team from outside Moscow to win the national championship – was a founder member of the KHL but had spent four seasons playing in the VHL due to financial restrictions and the need to upgrade its home arena.

But the league also lost three teams. The political instability in Ukraine forced Donbass Donetsk to withdraw, last season’s runner-up Lev Prague dropped out for financial reasons and Spartak Moscow was forced to take a year’s sabbatical while it resolved its own cash-flow problems. 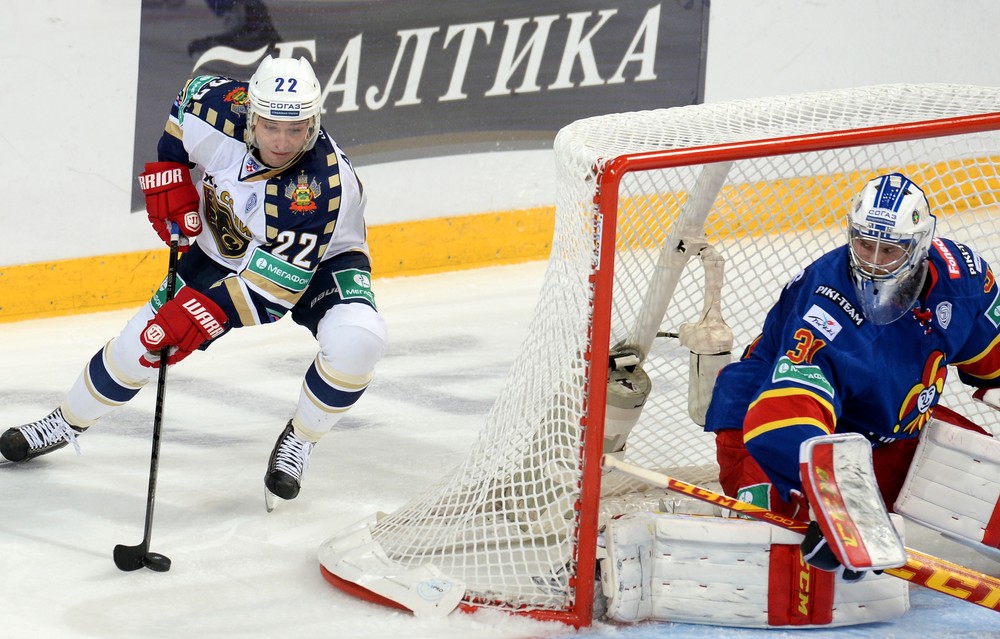 Viktor Tikhonov, the most successful hockey coach of all time, died on the morning of Nov. 24, 2014 at the age of 84. As head coach of CSKA and team USSR, he won 12 straight Soviet championships, three Olympic golds (and one silver), eight World Championship golds and the 1979 Challenge Cup and 1981 Canada Cup.

On the evening of Tikhonov’s death, his club, CSKA, played a SKA team that featured his grandson, also called Viktor. It was a somber evening, the game played out without music or fanfare. CSKA won 5-3, Tikhonov Junior scored two goals and an assist; the game was a fitting memorial to a hockey great.

Subsequently the KHL announced that the prize for the regular season champion would be named in honor of Tikhonov; CSKA went on to win that accolade. 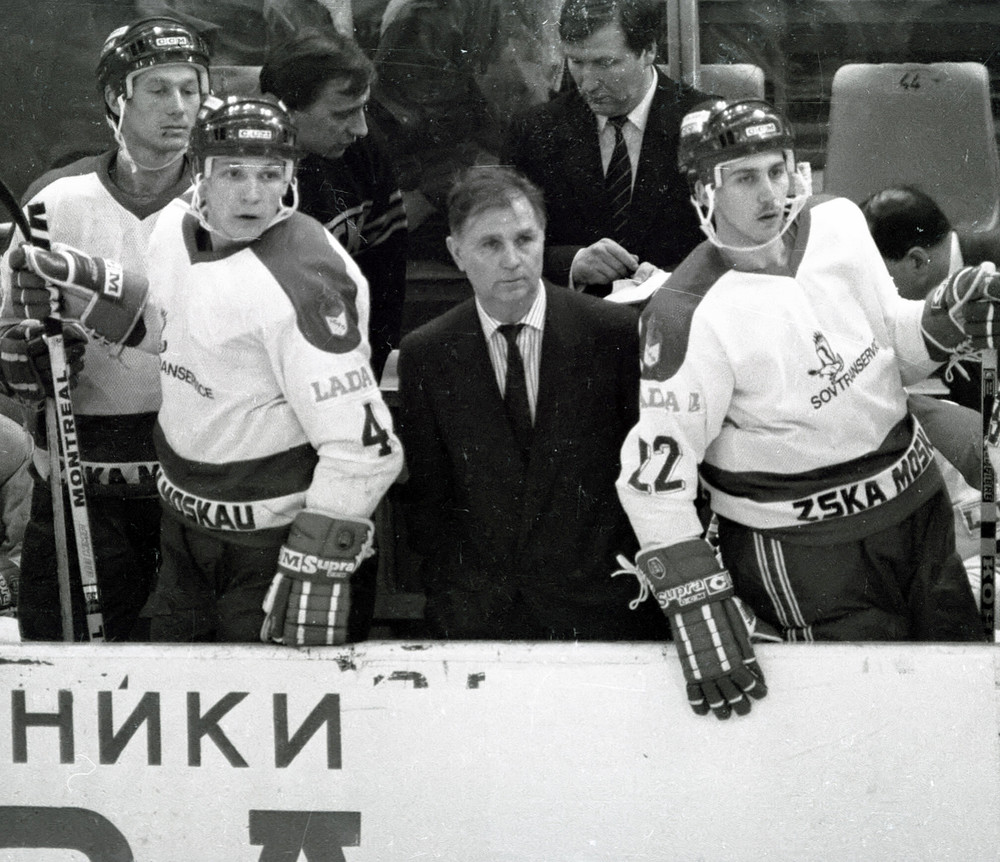 The big milestone of the season was achieved by Steve Moses of Jokerit. The American forward scored 36 goals in regular season, setting a new KHL record. He wasn’t the only one among the goals. CSKA beat Slovan Bratislava 12-0 on Feb. 11, setting a KHL record for the biggest victory.

Defenseman Kirill Koltsov, playing for Salavat Yulaev, smashed a long-standing record on Jan. 21. His scored the 376th point of his career in the Russian top league, making him the all-time top-scoring D-man ahead of Vyacheslav Fetisov. Wojtech Wolski got the quickest KHL hat-trick, scoring three in 1:46 for Torpedo against Sibir. And Sergei Mozyakin potted his 400th point in regular season play, the first man to do so in the KHL.

Then there was one oddity: defenseman Matt Anderson played in 63 regular-season games, a new KHL record. However, the season only had 60 games. Anderson, who was traded from Medvescak to Neftekhimik part-way through the campaign, squeezed in his extra appearances thanks to the Croatian team’s busy start to the season. In total he played 35 times for Medvescak and 28 for Neftekhimik, contributing 35 points. 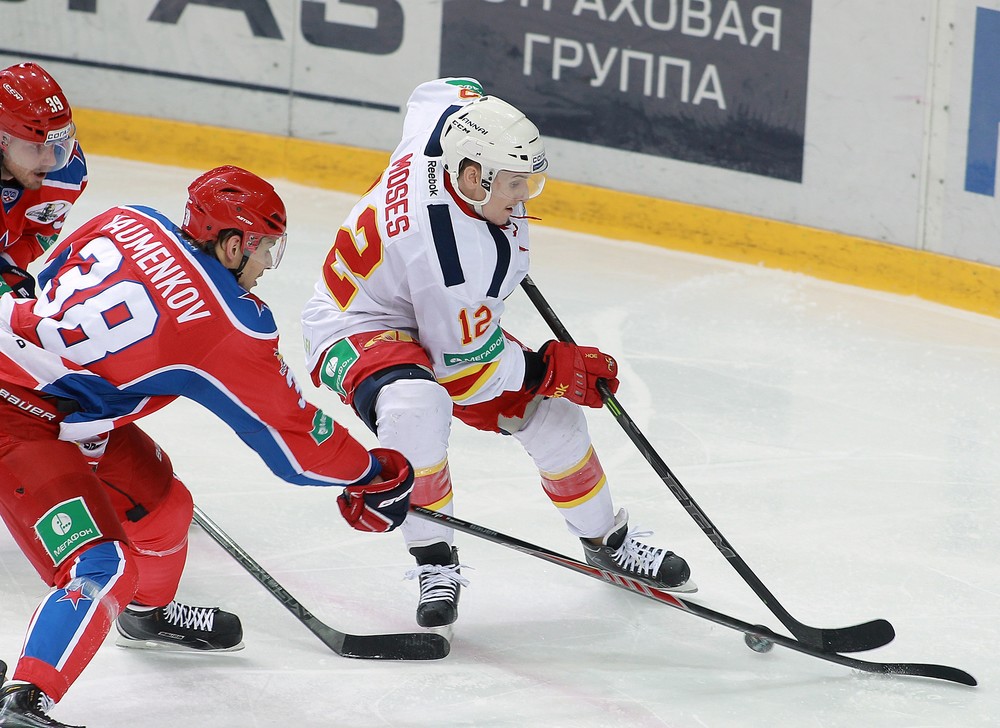 Defending champion Metallurg Magnitogorsk faced Dynamo Moscow – the previous Gagarin Cup holder – in the Opening Cup. It was the second time Dynamo had been invited to the curtain-raiser after the previous season’s runner-up failed to return for the new campaign, and the Blue-and-Whites’ first game since the departure of Oleg Znarok to the national team. It wasn’t a happy debut for new head coach Harijs Vitolins – Magnitka powered to a crushing 6-1 victory.

The regular season turned into a procession for CSKA. The Army Men won 49 out of 60 games, 39 of them in regulation. A rock-solid defense allowed just 98 goals all season, the lowest in the league, and the team finished with 139 points – 16 clear of SKA – and a goal differential of +107. Alexander Radulov topped the scoring charts with 71 points (24+47), despite missing 14 games. Stephane Da Costa, the KHL’s first French international, contributed 62 from 46.
Jokerit, fired by Moses’ scoring, finished fourth in the West with an impressive 119 points. HC Sochi also made the playoffs in its debut season, claiming the final berth in the Western Conference, three points clear of Atlant and Severstal. The third newcomer, Lada, found things tough in the East and came 11th, some way off the playoff pace.

Ak Bars topped the Eastern Conference table. Zinetula Bilyaletdinov enjoyed a successful return to club coaching after his stint with the national team, and completed his 800th championship game behind the bench during the course of the season. But Sibir was the break-out team in the East, winning the Chernyshev division. Andrei Skabelka’s team surprised many by the way it coped with the loss of the talented Jori Lehtera to produce its best-ever KHL season. Defenseman Patrick Hersley, forward Jarno Koskiranta and goalie Mikko Koskinen (traded to SKA part way through the campaign) were among the stand-out players.

Sibir’s success continued in the playoffs. The Novosibirsk team got past Traktor in six games, then stunned defending champion Metallurg with a 4-1 series win. Game four was the crucial one. Sibir led the series 2-1, but had lost its first game in Magnitogorsk and needed to stop the momentum swinging back to Metallurg. Two first-period goals put the visitor in control, but Danis Zaripov hit back to tie the game in the second. It went to overtime, and Renat Mamashev got the decider just 22 seconds into the extras. Sibir went 3-1 up in the series, and finished the job on home ice.

That set up an Eastern Conference final against Ak Bars. This was a low-scoring series, with the Kazan team getting over the line in five games, winning the last two 1-0 in overtime. Oscar Moller, Ak Bars’ Swedish forward, proved to be a difference-maker: over the course of the post season, six of his nine goals were game-winners, including the game four overtime marker.

In the West, the two Army clubs made serene progress to the Conference final. But after dropping just three games between them in the opening two rounds, CSKA and SKA served up a classic battle.

Initially, it seemed that the Moscow team would maintain its advantage from regular season. An assured 3-0 win to open up was followed by a 3-2 squeaker on home ice, giving CSKA the early advantage. A 3-1 victory in Petersburg, Alexander Radulov involved in all three goals, seemed to have the team poised for the final.

Then it all changed. SKA, with nothing to lose, roared into action. The Shipachyov-Dadonov-Panarin line kicked up a gear. SKA fired in 10 goals in two games, seven of them from that line. The series sprung back to life. Game six was an anxious affair; the teams traded power play goals in the first period but could not find a breakthrough until Patrick Thoresen struck nine minutes into overtime. It was all set for a game seven showdown in Moscow.

SKA went into a 2-0 lead through Kovalchuk and Dadonov, CSKA hit back with two goals in four minutes late in the second period. The home team tested Koskinen repeatedly – the Finn made 37 saves – but Thoresen, a Gagarin Cup winner under Bykov at Salavat Yulaev, delivered the winner in the 51st minute. SKA became the first team to claw back a 0-3 deficit in a playoff series and was off to its first Gagarin Cup final.

The final itself did not live up to the excitement of the previous round. SKA was simply too strong for Ak Bars all over the ice. Bykov’s team won it in five, wrapping up the prize with a crushing 6-1 victory in Kazan. That game, Ak Bars’ last stand, saw SKA fire four unanswered goals in the first period to power to its first Gagarin Cup. Evgeny Dadonov became the leading post-season goalscorer with 15, an Ak Bars defense that had six shut-outs in the playoffs was left in tatters. SKA, which had never won a national title since it was founded in 1946, finally got its hands on the biggest prize. 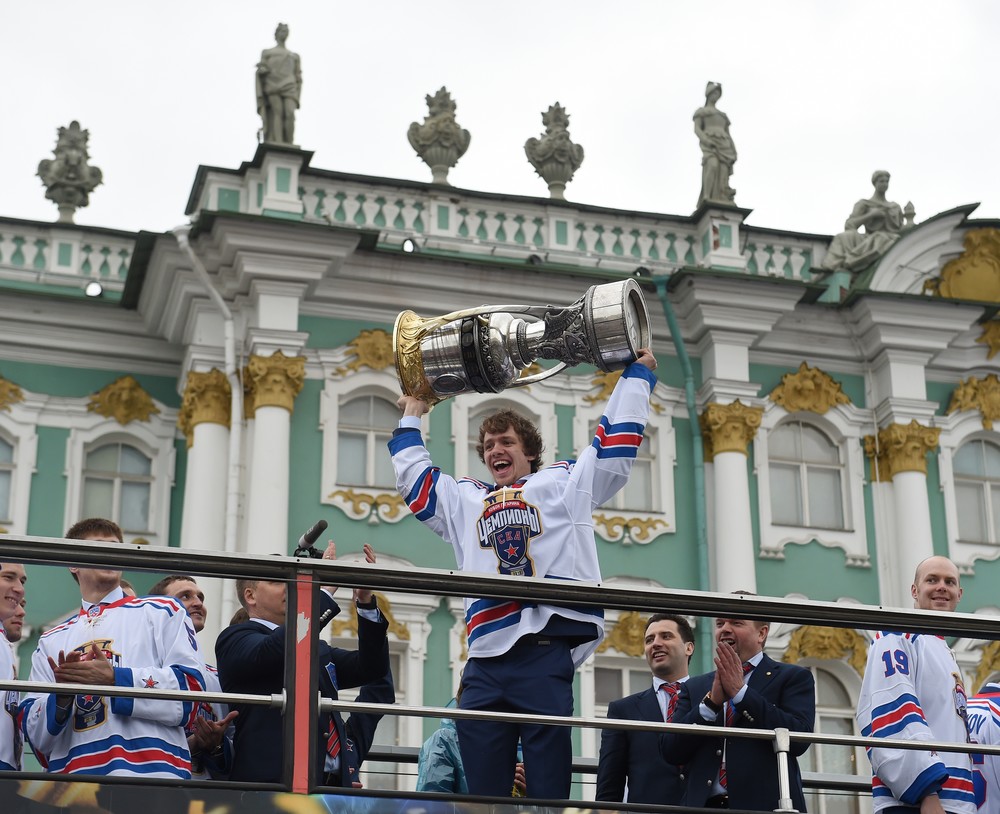