Nizhny Novgorod staged a world first, following last week’s retro-game with a futuristic vision of how the club might celebrate its centenary in 2046. Elsehwere every game ended in an away win, Vityaz and HC Sochi picked up valuable wins in their playoff bids, while Amur became the first visiting team to defeat Kunlun in Beijing.

After celebrating hockey’s history on Thursday to mark the 70th anniversary of the game in Russia, Torpedo chose Saturday’s game to look ahead and anticipate the club’s centenary in 2046. The team hailed the event as a world first, unveiling a futuristic club logo and uniform for the game against Loko. The matchday magazine also looked to the future, featuring interviews with schoolkids currently learning the game within the Torpedo system and perhaps starting out on a pathway towards Olympic or World Championship glory in the 2040s. 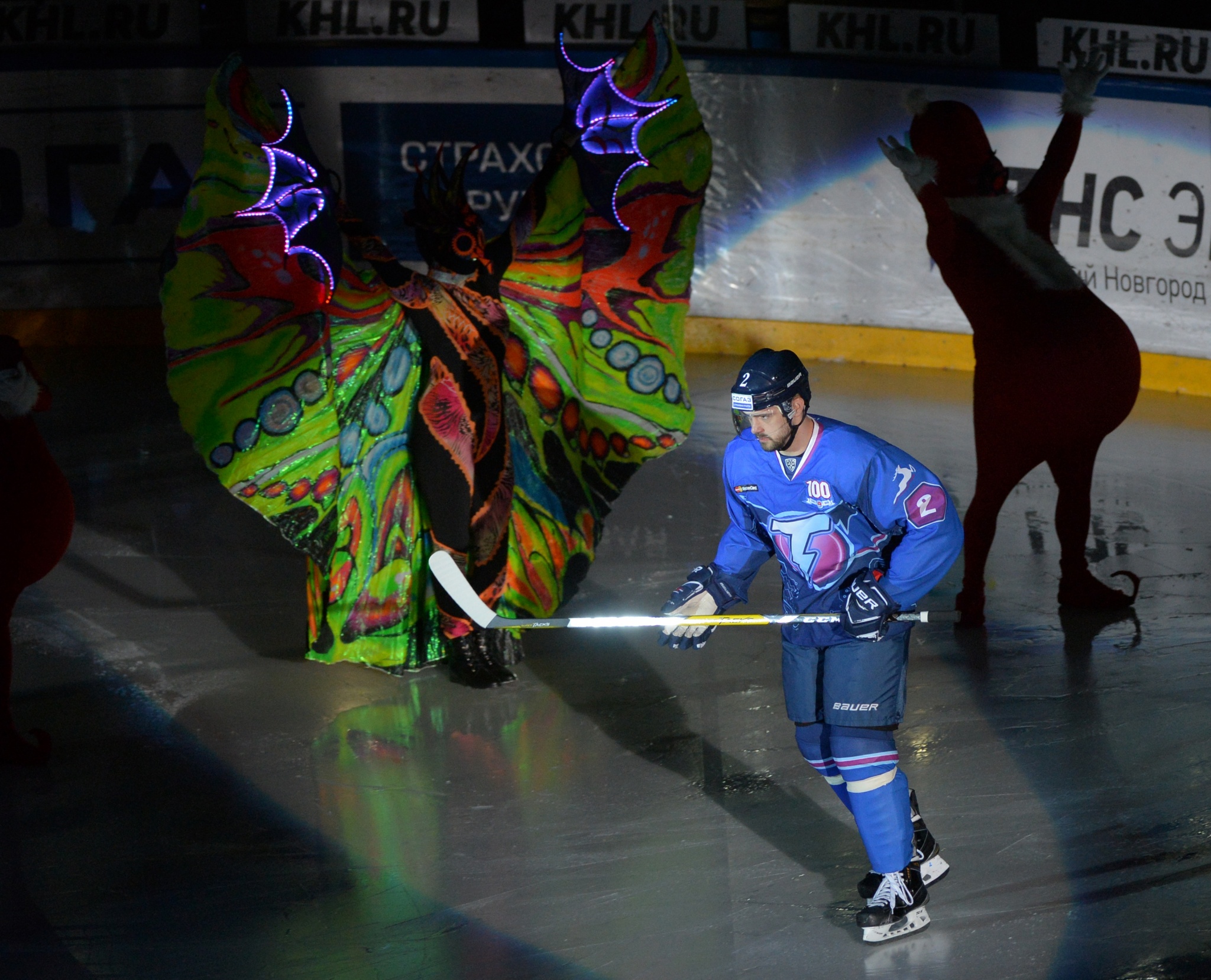 On the ice, though, the festive mood did not last so long. Despite a goal from Carter Ashton after 22 seconds, Torpedo’s immediate future in this game was not so promising. Staffan Kronwall brought Loko level in the fifth minute and second period goals from Vladislav Kartayev and Max Talbot meant that many home fans looked at the centrepiece of the celebratory display, a vintage DeLorean, star of the feature film Back to the Future, as a ticket to happier memories of back-to-back wins over Torpedo’s Volga rival in Yaroslavl in September.

A strong first period set Vityaz on the way to a valuable victory, lifting the Moscow Region team up to seventh place ahead of Jokerit.

Three unanswered goals in the opening stanza made the difference here. Alexei Kopeikin poached his 15th of the season in the 10th minute, long-serving forward Roman Horak doubled the lead and recent signing Alexander Pankov completed a thoroughly impressive start with a third goal just before the hooter.

After that the teams were content to trade goals. Yaroslav Dyblenko and Nikita Vyglazov found the net in the second period, Sergei Shmelyov and Horak again hit the target in the third. Vityaz now has a three-point cushion over ninth-placed Sochi; Spartak is 10 points shy of reaching post-season.

Sochi picked up a vital win to remain within three points of the playoff spots and snap a run of four losses.

With the pressure increasing on Vyacheslav Butsayev’s team, a good start was vital … and Evgeny Skachkov obliged after just 22 seconds. Andre Petersson, happily restored to full game readiness after injury problems, got a second in the 10th minute and Sochi was looking good.

But Dynamo, with just one loss in six, is looking for a top-four finish in the West and was not going to give up easily. Artyom Fyodorov reduced the arrears and Martin Karpov tied the scores seconds into the middle stanza.

It wasn’t enough. Sochi regrouped and took command late in the second period. Andrei Kostitsyn completed a hat-trick of assists to help Maxim Mamin make it 3-2, then Renat Mamashev converted a power play 30 seconds before the intermission. Pavel Padakin and Denis Kokarev traded goals in the final session, but the result was already secured.

Goalies on top in Beijing

It took a shoot-out to separate Kunlun and Amur after 65 minutes of goalless hockey was dominated by goalies Juha Metsola and Tomi Karhunen. Metsola had 34 saves for Amur, while Karhunen stopped 30 shots on his net.

Clear chances were few in regulation, with a Sean Collins solo rush late in the first period perhaps the best opportunity at either end. Into overtime and Kunlun pushed hard for a winner without finding a way to solve Metsola. Even an incident where a Tobias Viklund slapshot deflected off the skate of an official bounced kindly for Amur, with the puck squirming away from Damien Fleury as the net gaped.

In the shoot-out, though, Karhunen’s form deserted him as Tomas Zohorna, Vladislav Ushenin and Alexei Byvaltsev all converted their attempts. Fleury succeeded for Kunlun, but the win went to Khabarovsk and Kunlun’s 100% winning record in Beijing came to an end.