The latest KHL All-Star game brought a host of records – and a blazing stick in the hands of Linus Omark.

Salavat Yulaev’s Swedish forward took to the ice with his flaming weapon during the shoot-out in the skills show, taking the honors for the most spectacular attempt despite failing to beat CSKA goalie Ilya Sorokin.

“It was Vladimir Denisov from Traktor who had the idea,” Omark said. “He gave me the stick and it was really hot. I’ve never seen so many flames on a stick before. It was always going to be hard to score with it; the main thing was that I tried. That’s the most important thing today – to enjoy ourselves.”

Goalie Sorokin admitted that the sight of Salavat’s Viking bearing down on him with a blazing stick was a touch unnerving: “It was right in front of my face and I even caught a whiff of the smoke,” he said after the contest.

Omark’s firework display helped Team East claim a 3-2 victory in the skills show. The West took the honors in the fastest lap (Jokerit’s Brandon Kozun) and hardest shot (Medvescak’s Milan Jurcina). But the East hit back to win the next three events: shoot-out, awesome offense and team relay. 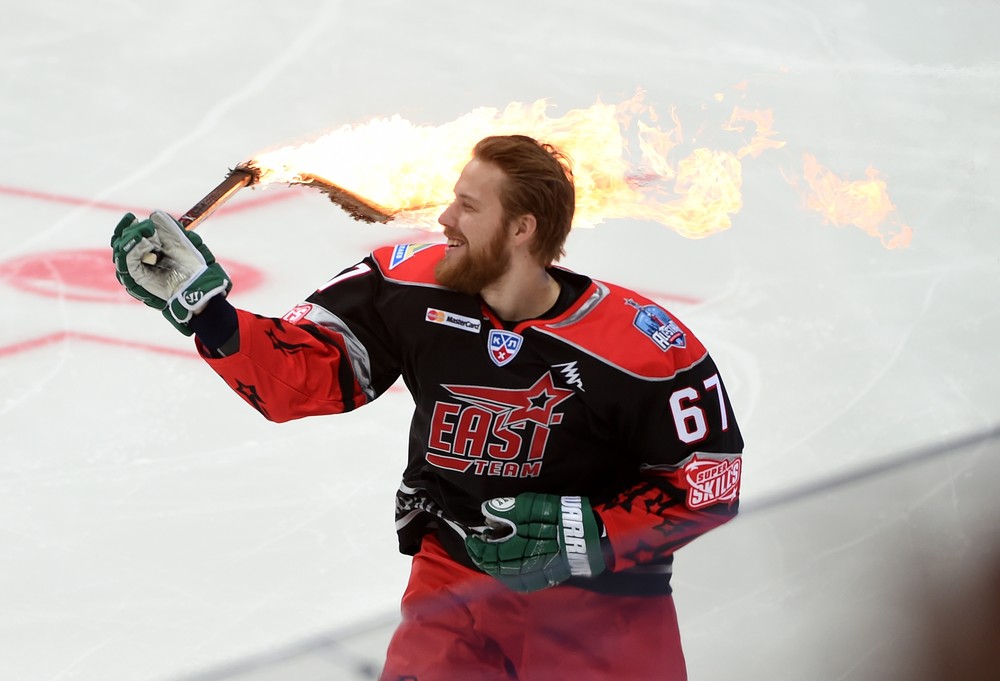 The 2016 All-Star Game set a new record for scoring – both collectively and individually. When Dinamo Minsk’s Matt Ellison scored on Amur’s Juha Metsola late in the second period to make the score 18-17 to the East, he took the aggregate tally past the previous best of 34 goals, as seen on two previous occasions. The final verdict brought up the half century: 28-23 to Team West and a final tally of 51 goals.

Ellison continued to write his name into the record books: his 50th-minute goal was his seventh of the night, beating Sergei Mozyakin’s previous record of six. The popular Canadian also claimed an assist, finishing with eight points and beating the seven points previously set by Mozyakin and Alexander Radulov. 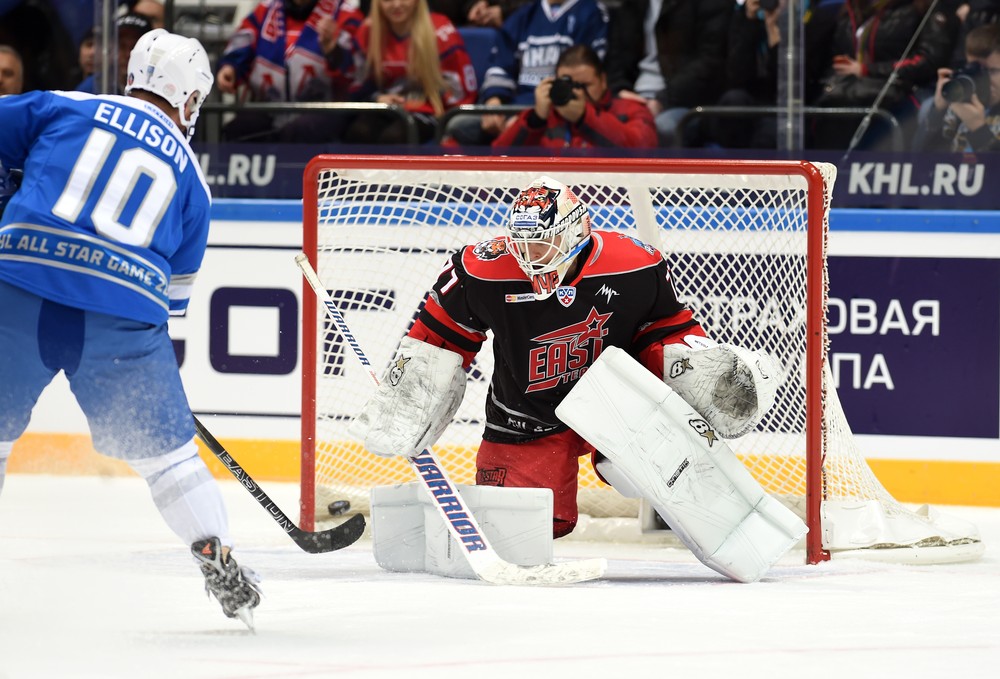 Those two greats were also involved here and served up another possibly unique moment midway through the second period. As Magnitogorsk captain Mozyakin broke through on goal, Radulov sought to protect his CSKA colleague Sorokin by first hooking his opponent, then wrestling him to the ice. Ref Rafael Kadyrov awarded two penalty shots; Mozyakin converted one of them. “This isn’t an easy game to control,” Kadyrov told journalists. “I can’t tell you exactly what Radulov said afterwards – it was in English and it sounded like he was swearing.”

The stress clearly told on the officials. With two minutes to play, and the East trailing by five, the bench hit on a new strategy. Pull the goalie, pull the linesman, and send out eight skaters. It worked well enough to earn Mozyakin another penalty shot, but Radulov quickly donned the goalie’s kit to deny the KHL’s record scorer a seventh goal on the night. The forward celebrated that with even more relish than his solitary goal, a lovely backhand flick through his own legs that was later repeated by Stephane da Costa. 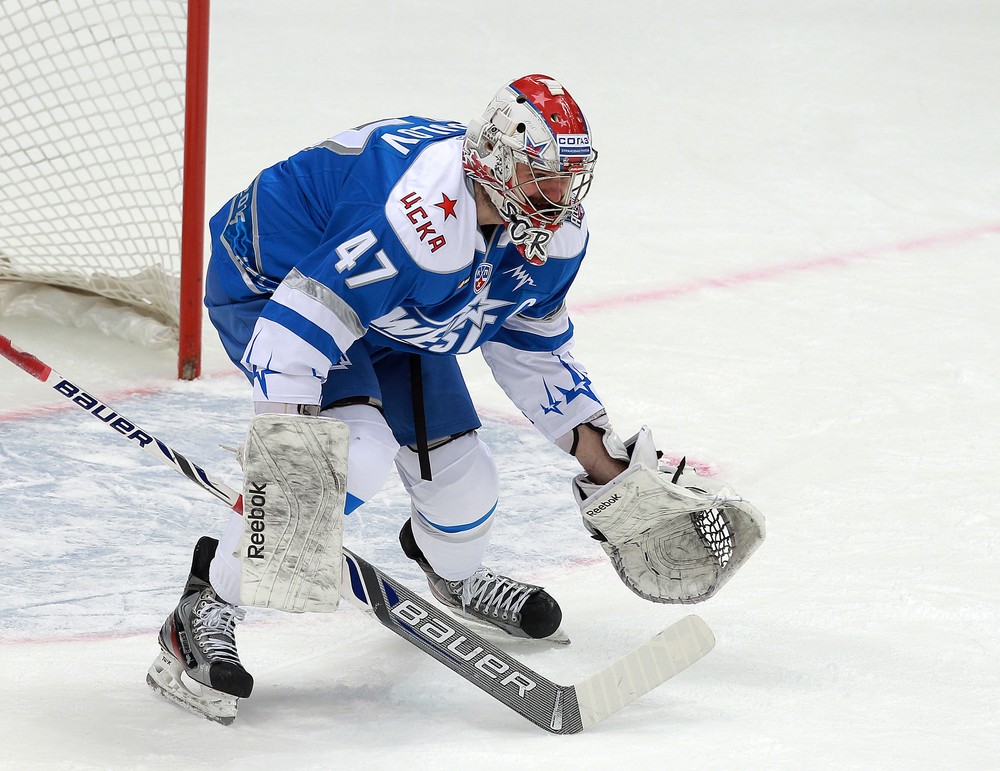 As well as the antics of established stars like Mozyakin, Radulov and Omark the big day also struck a blow for youth. Kirill Kaprizov, a bright attacking prospect from Metallurg Novokuznetsk, became the youngest ever scorer in a KHL All-Star game. He finished with two goals, adding further distinction to a season that also saw him collect a World Junior silver medal with Russia in Helsinki earlier this month.

The big event attracted 11,753 fans to the VTB Arena. In addition to the on-ice action there was also a youth masterclass directed by legendary captain of Russia and Ak Bars, Alexei Morozov. Legends Park, around the new Moscow rink, was transformed into a fanzone – giving a taste of the atmosphere organizers will be hoping to enjoy when Russia welcomes the IIHF World Championship in May.