While Jokerit in Moscow was proving that clinical finishing is often decisive, SKA was demonstrating that it is not always enough on its own. The men from Petersburg scored five goals from 20 shots at Torpedo, but still came away on the losing side.

The decisive blow was struck by Dmitry Syomin in overtime, taking advantage of a penalty on SKA’s Mikko Koskinen for delaying the game.

That snapped a 5-5 tie after a pulsating game in which SKA generally had the upper hand. Evgeny Dadonov and Vadim Shipachyov gave the visitor the edge in the first period, sandwiching Vyacheslav Kulyomin’s reply for Torpedo. The second period followed a similar pattern, with SKA’s Evgeny Ketov (shorthanded) and Alexander Barabanov scoring on either side of Carter Ashton’s power play goal for the host.

But the third stanza had a new script. Two goals in a minute saw Daniil Ilin and Artyom Alyayev tie the scores before Shipachyov’s second of the game put SKA back ahead. Alexei Sopin cancelled out that lead, though, and took the game to overtime. 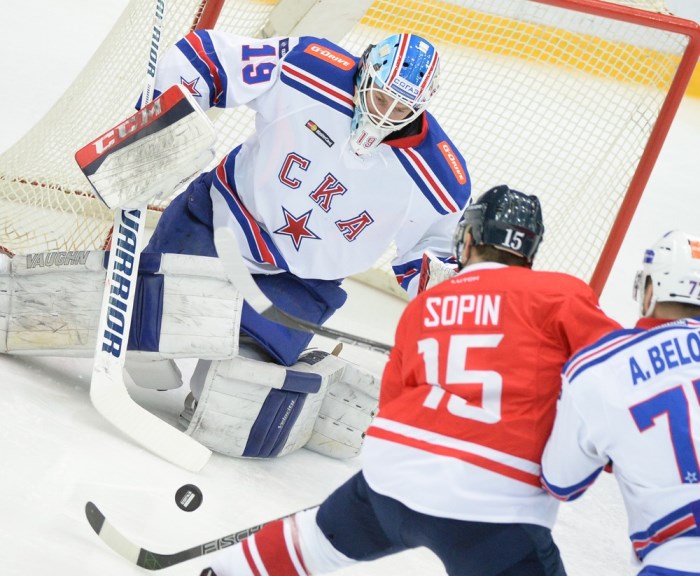 Avangard back on top in the East

The international break seemed to sharpen Avangard’s reflexes: the team stormed out of the blocks with two goals in three minutes, dispelling any fears of rustiness after the short lay-off.

Maxim Kazakov opened the scoring after just 93 seconds, and Vladimir Sobotka added a second on 2:56.

Sibir didn’t panic and began to generate some offense of its own, ultimately firing in 33 shots on Dominik Furch’s net. However, the goalie was in no mood to allow the opponent back into the game and Alexander Perezhogin’s empty netter wrapped up a 3-0 victory.

Success on the night also saw Avangard overtake Sibir at the top of the Eastern Conference table. The Omsk team has the edge, but the two are level on 76 points. 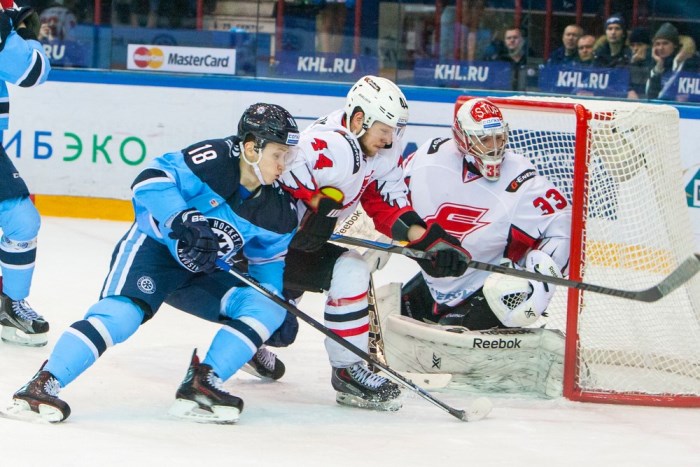 Metallurg Magnitogorsk twice came from behind before beating Vityaz 4-2. Dmitry Shitikov and Anton Korolyov gave Vityaz the early initiative. Magnitka replied with two goals from Danis Zaripov and one each from Viktor Antipin and Chris Lee; Sergei Mozyakin weighed in with two more assists.

Nigel Dawes scored his 24th goal of the season to help Barys overpower Metallurg Novokuznetsk 6-2. The Kazakhs opened up a 5-0 advantage with Dawes on the scoresheet, Brandon Bochenski delivering a trio of assists and Alexander Lipin potting his first of the season. Kuznya got a couple back late in the second period thanks to Robert Kousal and Ilya Musin but Maxim Khudyakov’s second of the game completed the scoring.

Salavat Yulaev’s Nordic combination defeated Dynamo Moscow in Ufa. Sweden’s Andreas Engqvist opened the scoring off an assist from his compatriot Linus Omark in the second period. Then the same pair combined to create a goal for Finland’s Sami Lepisto in the third. Another Swede, Niklas Svedberg, made 29 saves as Salavat won it 2-0.

Dinamo Riga also posted a shut-out, winning 3-0 at Medvescak. The game was scoreless until the 35th minute when Tim Sestito put Dinamo ahead. Two quick goals early in the third period from Mikelis Redlihs and Edgars Kulda completed the scoring. Joacim Eriksson had 24 saves.

Slovan enjoyed a 4-2 victory at home to Dinamo Minsk. The early stages turned into an individual shoot-out between Marek Viedensky and Jonathan Cheechoo, with both players scoring twice to tie the scores at 2-2 after 40 minutes. But third-period markers from Vaclav Nedorost and Tomas Kundratek saw the Slovaks take the win.

Ugra edged Avtomobilist 3-2 thanks to Alexander Ugolnikov’s game-winner in the second period. Avto twice led early on through Artyom Gareyev and Pavel Turbin, but Igor Bortnikov and Andrei Ankudinov kept Ugra in the game.