It’s not yet two weeks since SKA parted company with head coach Andrei Nazarov – and the former chief has already given the Army Men grounds to regret that decision. Back at his previous club, Barys, a quirk of the calendar offered this opposite for swift revenge. And, on a day when Kazakh hockey celebrated the official opening of Astana’s new arena, Nazarov’s new team came up trumps.

The excitement of the grand opening seemed to take its toll early on, with SKA retaining its composure to take a third-minute lead through Anton Burdasov. Nigel Dawes then tied it up in the first period before assisting Roman Savchenko’s go-ahead goal early in the second. But when Evgeny Dadonov levelled the scores on the power play the game went into the final stanza with everything to play for.

That’s when Dawes got to work once more. SKA began brightly, but after losing possession at a face-off in the Barys end Dawes engineered a lightning breakaway, exchanged passes with Brandon Bochenski and fired home his second of the night. That was the game-winner; Konstantin Romanov added a fourth three minutes later to ease any nerves in the closing stages.

CSKA paid tribute to legendary former player Pavel Bure in front of a packed derby day crowd on Leningradsky Prospekt, adding his jersey to the roll the of honor around the club’s historic rink.

Nicknamed the ‘Russian Rocket’ for his fast-paced performances with the Canucks in the NHL, Bure began his career with three seasons at CSKA where he formed a formidable line alongside Sergei Fedorov and Alexander Mogilny. Those three were among the first wave of Soviet players to head west as the Iron Curtain came down and Bure became one of the first true Trans-Atlantic hockey stars.

Today’s CSKA also has its star names, but Wednesday’s derby success was largely down to a lesser-known player. Sergei Andronov got two of his team’s goals, including the game-winner, to claim the man-of-the-match award here. He and Igor Ozhiganov opened up a 2-0 lead for CSKA in the first period but Dynamo hit back in the second through Ansel Galimov and Denis Kokarev. Parity was short-lived though, as Andronov got the winner in the 36th minute.

Dynamo included goalie Alexander Yeryomenko on the roster for the first time since the start of the season. He didn’t make it onto the ice here, but has overcome the injury he sustained against Sibir back in August and will be pushing for Alexander Lazushin’s place in the starting line-up. 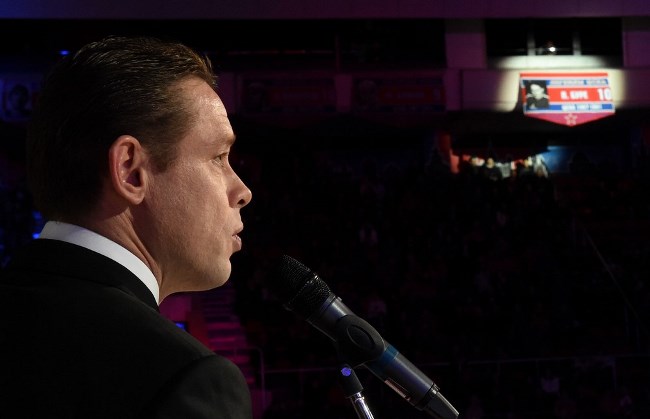 10 goals, but no milestone

Sergei Mozyakin remains tantalizingly close to his 400th top-flight goal after missing out in Minsk. Magnitka’s captain had assists on two of his team’s goals, but unusually could not muster a single shot on target as he remains on 399 markers.

Initially the game looked to be going Magnitka’s way. Jan Kovar opened the scoring in the sixth minute with the first of two goals on the night and Wojtek Wolski got a third in the 19th minute to send the visitor into the intermission 3-2 up. Ryan Gunderson and Ryan Vesce were the home scorers.

Oskar Osala extended that lead in the 26th minute, but from then on Dinamo called the shots. Andrei Stepanov quickly pulled one back and Matt Ellison tied it up 30 seconds before the hooter.

The third period was thus set for a decisive contribution from someone – but if the script called for a Mozyakin winner, the reality was a second of the night for Stepanov to put Dinamo up. Alexei Kalyuzhny completed the scoring with six seconds to play; Metallurg and Mozyakin keep waiting.

Salavat strikes back to down Torpedo

Following an 11-goal thriller last time out, Salavat Yulaev once again found itself involved in a dramatic encounter. This time the Ufa team clawed its way back from 0-2 down to tie the game in the closing minutes before snatching an overtime success.

Torpedo, riding high in the Western Conference this season, took a first-period lead through Vadim Khomitsky and seemed to be on the way to victory when Dmitry Syomin made it 2-0 early in the third.

But Salavat hit back: Nikolai Porkhorkin quickly reduced the deficit before Alexander Loginov got a dramatic tying goal on 58:51. That paved the way for Sami Lepisto to complete the recovery in overtime. 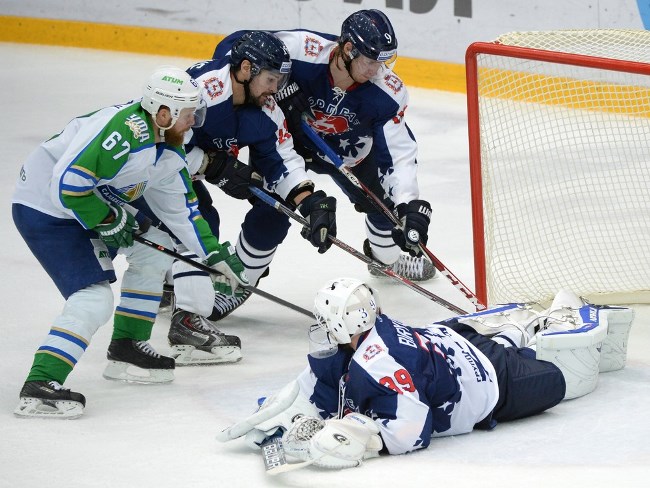 Ak Bars weathered a third-period storm to beat Medvescak 4-3 in Zagreb. The early stages were all about the visitor: Mikhail Glukhov, Oscar Moller and Dmitry Obukhov made it 3-0 inside 27 minutes. But the start of the third saw the host hit back with goals from Marek Kvapil and two from Mikko Kousa. However Vladimir Tkachyov added a fourth for Ak Bars between Kousa’s markers and that proved good enough for the win.

Spartak recovered from a slow start to beat Avangard in overtime. The home team raced into a 2-0 lead inside five minutes thanks to Vladimir Sobotka and Denis Parshin, and held that advantage until the third period. But Andrei Yermakov got one back and Vyacheslav Leshchenko tied the scores in the 53rd minute before getting the overtime winner.

First-period goals from Artyom Voroshilo and Sergei Shumakov set Sibir on the way to a 2-0 win at home to Admiral. Alexander Salak made 37 saves for his shut-out.

Vityaz won 3-2 at Severstal thanks to a strong first-period showing. Alexander Nikulin, Anton Korolyov and Mario Kempe all scored in the opening stanza. Yury Trubachyov and Maxim Trunyov were Severstal’s scorers.

Amur edged a shoot-out success at Metallurg Novokuznetsk thanks to Vyacheslav Ushenin. The teams were tied at 2-2 in regulation. Amur led twice through Vladislav Ushenin and Maxim Veryovkin; Robert Kousal and Maxim Kazakov equalized for Kuznya.

Lada motored to a 5-2 win at Slovan. The damage was done in the first two periods with four unanswered goals from Georgy Belousov, Stanislav Romanov, Stanislav Bocharov and Martin Zatovic.