Welcome to the game

22 August 2015, 22:50 News
Recently we picked out a line-up of players leaving the KHL; today we’re looking to the future with a run-down of six guys to watch out for in the coming season. This summer hasn’t seen so many big name moves but there are still plenty of players worth looking out for as they take the next step in their careers. 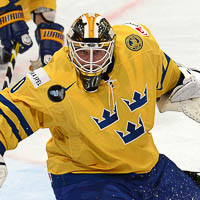 The margin between triumph and disaster is always pretty fine for a goalie, and Viktor Fasth possibly knows that better than most. He was on the point of establishing himself between the piping for team Sweden during the 2011 World Championship until an uncharacteristic off-day in the final against Finland saw him widely blamed for Sweden’s heavy defeat.

But one bad game does not define a career. Fasth showed great potential in his homeland, posting impressive numbers for AIK – including a 94.5% post-season save percentage in 2011. That earned him a move to Anaheim, and later Edmonton, where he struggled to dislodge Ben Scrivens from the starting position.

He returns to Europe this year ready to serve as #1 for CSKA. Could he be the missing piece from Dmitry Kvartalnov’s defensive jigsaw as the Army Men seek to build on last season’s success? 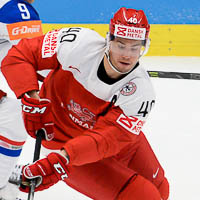 Denmark isn’t exactly a hockey hot spot, but the small Scandinavian nation has established itself in the top division of the World Championships over the past decade and is now beginning to bring through a new generation of talent.

Jensen, a 24-year-old D-man, is part of that young brigade. He’s been a part of the national team set-up since making his Worlds debut in 2011, and last time out in Ostrava he earned plenty of ice time throughout the competition.

His club career has also been on a steady upward incline, working his way through the Danish league and the Swedish second tier to a stint with Farjestad in the S-Liga last time out.

Jokerit is well known for its scouting prowess in Scandinavia, and Jensen has the potential to be another uncovered gem. 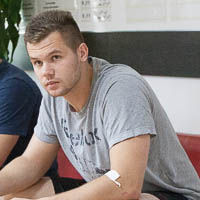 Last season Sibir sprung the biggest surprise of all, unearthing Patrick Hersley and watching the Swedish defenseman turn into a star. So can Roth, 25, repeat the magic?

He’s spent almost his entire career in his native Czech Republic, with two seasons in London, Ontario, representing his only overseas experience. Back in Europe he played for Slavia Prague and, most recently, HK Trinec, helping the latter to a runner-up spot in the Czech championships last season.

At 182 cm his size makes him a solid opponent but he remains sufficiently mobile to chip in with some useful scoring – 33 points in 35 regular season games last time out.

Roth is on the fringes of the Czech national team, having made a handful of Eurotour appearances, and will be looking to grab the attention of new head coach Vladimir Vujtek in the coming season. 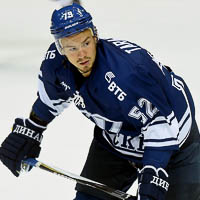 It’s a case of ‘welcome home’ as Tarasov, 24, flies back from a stint within the Sharks organization.

The Moscow-born forward learned his trade with the Chernyshev School, closely associated with Dynamo, and should be a natural fit for the Blue-and-Whites.

Last season Tarasov made his NHL debut, but spent most of his time with San Jose’s AHL affiliate in Worcester, racking up 33 points in 54 games.

As Dynamo looks to refresh its roster, Harijs Vitolins will be seeking some youthful firepower from Tarasov to add some zip to the offense. 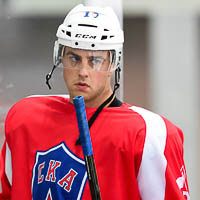 Now he’s back as SKA looks to offset the loss of experienced forwards like Tony Martensson and Patrick Thoresen, and this skillful winger is hoping to put a frustrating year in North America behind him.

Last season, dividing his time between Toronto and St Louis, was not a huge success and the Swede’s scoring dipped alarmingly.

But his career record shows him plundering points at will for Skelleftea and, if his occasional shoulder problems don’t interfere, he should be good for a high-scoring return in Russia this time around. 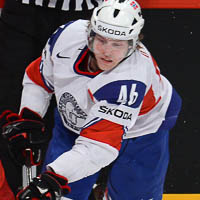 Olimb was one of the big stars of last season’s Champions Hockey League, scoring at two points a game as Frolunda finished as runner-up to Lulea.

He also scored heavily in the Swedish championship, and chipped in with eight assists in seven games for Norway at the World Championship.

Olimb isn’t a big goal-scorer, but he regularly delivers the killer pass.